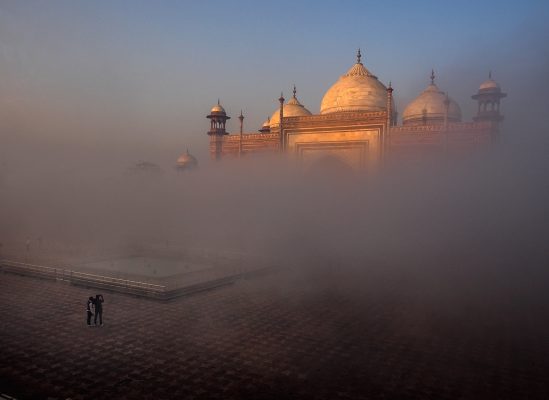 The Taj Mahal was built in 1631 by Shah Jahan, as a testament to the love he felt for his wife, Mumtaz Mahal who died giving birth to their 14th child, Gauhara Begum. The ivory-white marble mausoleum is built in a combination of Persian and Mughal architecture. The tomb contains both the false sarcophagi in the main chamber, as well as the actual tombs of Mumtaz Hahal and Shah Jahan, which are in a lower level of the building.

The Taj sits on the south bank of the Yamuna River in the Indian city of Agra. The 42 acres of the Taj complex include a mosque and a guest house, as well as formal gardens and fountains (which visually lead your eyes to the Taj).

These trips have been incredible, as I get to combine my love of shooting with the opportunity of discussing photography with the travelers, many of whom are very serious photographers. 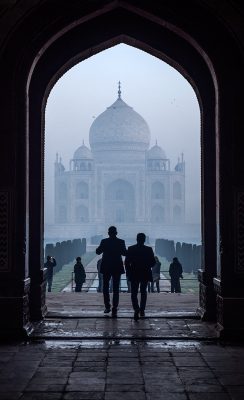 The Taj’s place on the “New Seven Wonders of the World” list is justified; once you walk through the gates and see the structure before you… it is amazing. I’ve photographed the Taj many times, every journey presents this building in a way that surprises you: early morning can saturate the marble with a pink cast, noon allows the building to overwhelm the viewer with the size and majesty, late day is magical as the crowds are leaving (you used to be able to stay later on the grounds, as you could view it from the other side of the Yamuna River).

Each time is different, and this particular morning presented one of the most stunning visual surprises I’ve encountered. Along with a group of travelers from this Nat Geo Expedition, we’d gathered at the entrance gate to the Taj before dawn. Waiting in line presents it’s own visual possibilities as well, as there was a nice photo of early morning activity on Fatehabad Road, leading to the south entrance of the Taj Mahal. 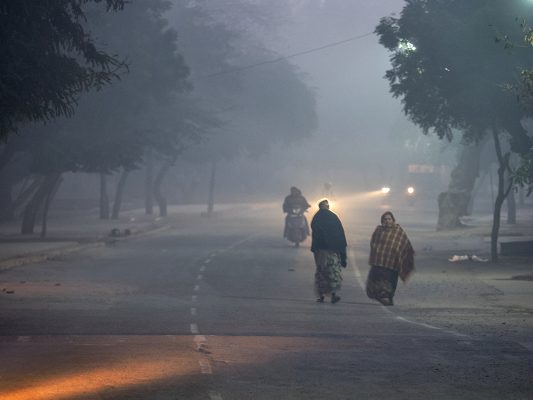 Once in, after a vigorous search at security, I generally like to sprint to the inner courtyard area, as it’s nice to be able to photograph the scenes sans crowds. It doesn’t take long until the grounds are pretty packed, making those solitary feeling images almost impossible to accomplish. This particular morning, a fog bank was really obscuring the usual views of the buildings, with the Taj and the side mosque fading in and out of view due to the fog, the few visitors obviously anxious to see this monument to love. 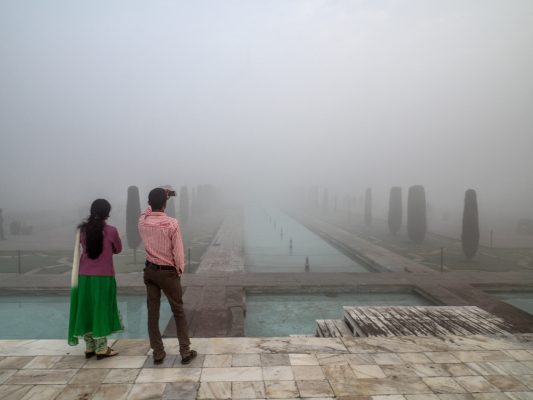 In that humid and foggy morning, the mist would slightly open, then close immediately. I was going to my usual vantage points, just waiting out the atmospheric show. Those moments when the fog would open, we were presented with some pretty dramatic views. 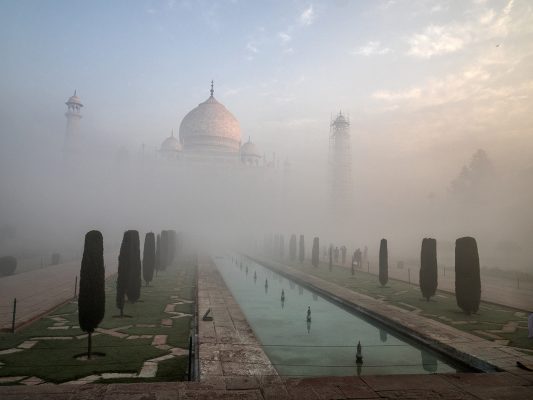 On either side of the main building sit two red sandstone buildings that mirror each other and face the tomb. The western building is a mosque, the eastern structure is a “jawab” or answer, possibly built to provide a balance to the the complex. Below the 115’ tall dome of the Taj, I was walking the marble floor which surrounds the main building when I approached the overlook of the western mosque. The building was moving in and out of view, through the fog… the surrounding patio empty of almost all visitors. As two moved forward, the mist started clearing near the top of the mosque. An amazing site that was on that edge of impossibility to photograph because of the extreme dynamic range the scene presented: the appearing mosque was lit by almost direct morning sun, the two visitors in the lower left were in shadows, which were several stops beyond a possible successful exposure.

In addition to the Singh-Ray Hi-Lux UV Filters I have on all my lenses, two Singh-Ray filters always reside in my camera bag: the Galen Rowell Graduated Neutral Density filter and the LB Warming Polarizer.

Knowing the image I saw in my “mind’s eye” was impossible to capture without “help,” I pulled out my graduated ND filter. I know, you’re supposed to use a filter holder, which I do carry, but this was such a rapidly-changing scene, I wasn’t afforded that luxury of time in attaching my filter holder to my Olympus 12-40mm lens. So, using it as I often do, I simply held the filter in front of the lens, moving the filter up and down until I got that perfect “hand-off” of gradation: bringing the sky down about two stops, while exposing for the lower mid-range, allowing me to capture the two guys making a cell phone photo. They lifted their camera, they shot, they left. Sometimes the moment presented to you is barely that! 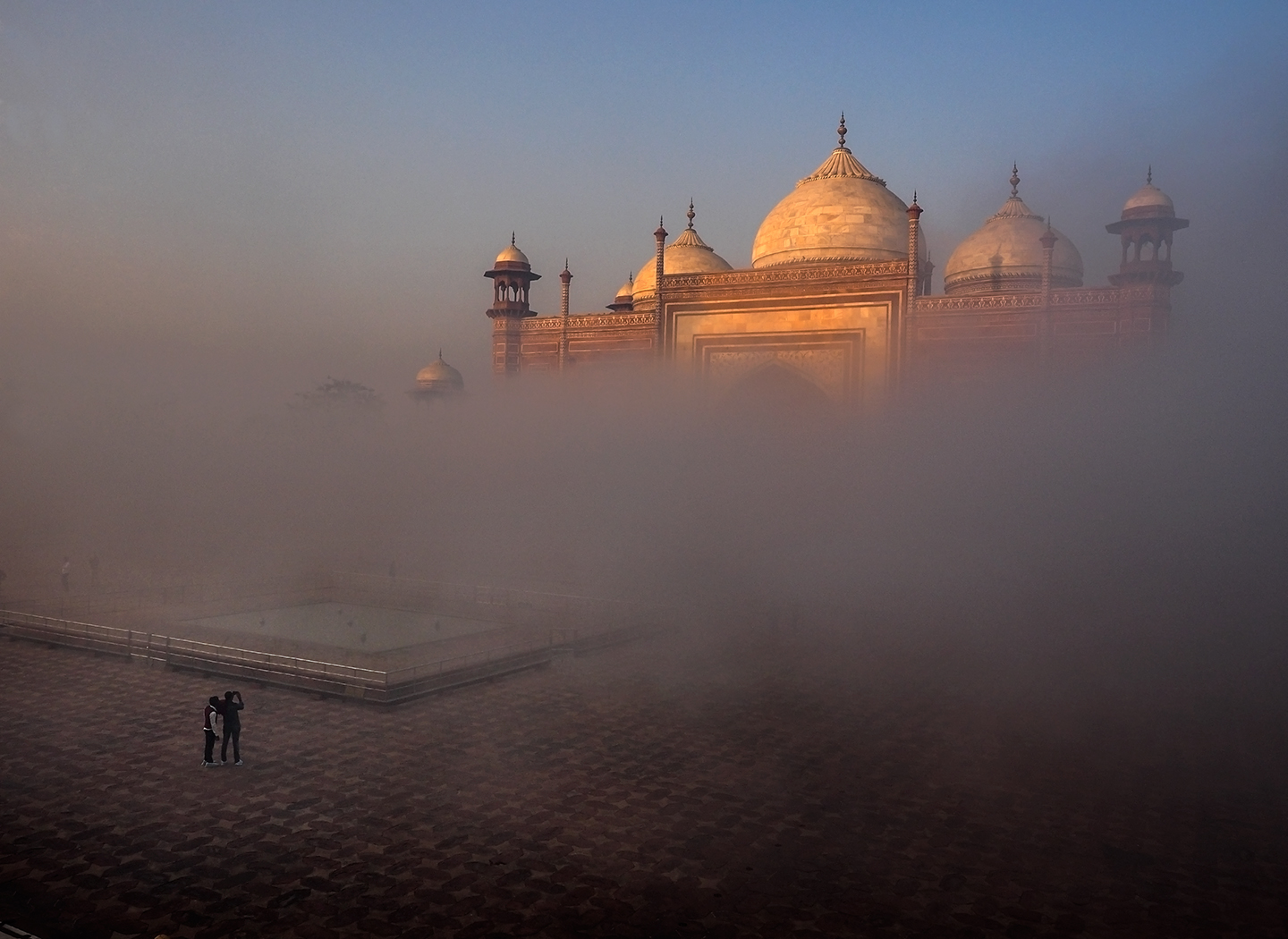