Editor’s note: Don’s technique for capturing and processing this image is also a great way to solve the challenge of combining a very long exposure for one element of a scene with the need for a faster exposure to avoid motion in another part of the scene. 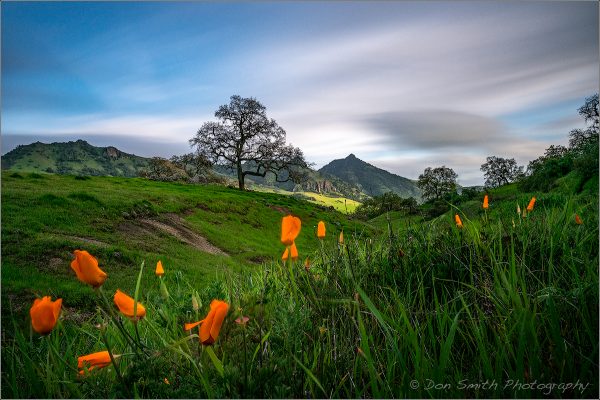 Back in my college days at San Jose State University, my photojournalism adviser/professor, Joe Swan, used to have various sayings.

Two of my favorites that have stuck with me over the years are: “Think how your grandma would compose a scene, then compose something different” and “try taking a bug’s eye view of your scene.”

NOTE: As PC as the world has gotten, I don’t think Joe (nor I) would be saying this first statement in public. I know he meant no disrespect – I have plenty of grandmother friends who are great shooters – but you see where he was going with this, especially back in the film days – OK – enough said.

It’s really his second statement that I want to discuss today.

Simply put, you can give prominence to seemingly uninteresting foregrounds by taking a bug’s eye view. This means getting low – really low – like a bug!

Here was my setup for this composition. Note I use a tripod without a center post. This allows me to flatten the tripod when desired.

Flatten your tripod to take a “bug’s eye view”

By going really low, I was able to not only give prominence to the poppies (and as you can see, there weren’t very many) but I was also able to hide the majority of the ugly barbed-wired fence (I cloned out what was left).

The sky was alright, but looked rather static and boring when I shot the frame in one capture, so I decided to add some motion to the clouds by using my Singh-Ray 15-stop Mor-Slo solid ND (note – just to the left of the above composition was a jet contrail). 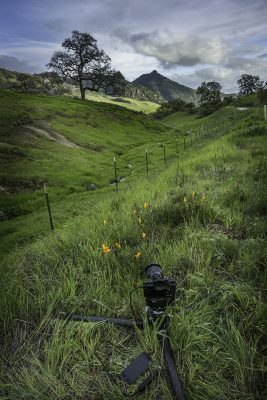 My 15-stop ND was going to require an exposure of 8.5 minutes – this would allow the clouds to move and add a painterly look to the sky, but the exposure would be much too long to freeze the poppies. Here is how I solved my problem.

First I composed the scene and took an exposure for the entire scene. Of course the sky was still lit by sunlight and the poppies were in shadows so my initial thought was to use my Singh-Ray Galen Rowell 2-stop graduated ND.

Then I decided I wanted some motion is the clouds, so I opted for the 15-stop Mor-Slo. It would have been virtually impossible for me to hold a 3-stop grad for the 8.5 minute exposure and I don’t use a filter holder (because of vignetting issues when shooting at f/16 wider than 20mm).

So, the only feasible way was to capture an image of the foreground without the Mor-Slo filter, then add the 15 stop Mor-Slo and take a second exposure. 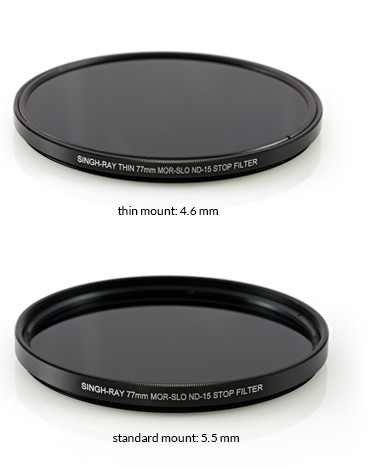 To capture the image of the poppies frozen required me to raise my ISO from 100 to 4oo. My exposure at f/16 required a shutter speed of 1/20th – too slow to freeze the poppies, so by increasing my ISO two stops I was able to increase my shutter two stops to 1/80th. I would just time the lulls in the breeze.

Back in Lightroom, I globally processed both images, then opened them as layers into Photoshop. I then used the auto-align feature, added a mask, and brushed in the properly exposed foreground.

With that bit of easy processing wizardry, I was able to add back the 15-stop Mor-Slo and expose my moving clouds!

How Do I Calculate Exposure With The Singh-Ray 15-Stop Mor-Slo?

Someone asked me the other day on Facebook how I figured out the exposure when using my ND filter. I first set the proper exposure without the Mor-Slo attached, then I just do the math in my head (and I use my fingers and toes to count 15 stops). I then carefully add the Mor-Slo making sure I don’t bump the focus or zoom on the lens. There are some great apps out there if you run out of fingers and toes! It is extremely important to use the same aperture for both frames so your depth-of-field does not change.

Here Was My Math:

Now I needed to double the shutter 15-times exponentially:

I firmly believe that the majority of my best imagery is created in my mind. A large part of the fun for me is working through the technical aspects of making the image – this ranges from conception to capture and finally, to processing.

All I did here was overcome the technical challenges of realizing this image that I first saw in my mind. A large part was simply seeing the world from ground level instead of my tripod set to my height of 6′ 2″! With this one move, innocent tiny poppies and grass take on the role of strong visual elements in the image.

Let your imagination run wild then go out and make your images. Above all, enjoy the process and have a blast!