Infrared photography is not new, the advent of digital photography, although, has made it easier work with than previously in “the film days”.

The first published infrared images were published in February 1910 in the, The Century Magazine as well as the October 1910 edition of the Royal Photographic Society  Journal. These two publications illustrated work by Robert W. Wood. Wood is credited with the discovery of the near infrared spectrum’s effects on everyday objects. These, today, are known as the wood effect and can be readily seen in infrared images. So,first, let’s define the term “infrared” to start.

Infrared is not a visible light – Yes, that is accurate. When we think about light, we all think about the sun, our primary light source. It emits three basic spectrums of light:ultraviolet, visible and infrared. The human eye sees the visible spectrum between 400nm and 700nm. Below 400nm (400µ) – the ultraviolet spectrum – there are x rays and harmful radiation from the sun. Above 700nm (700µ) is the infrared spectrum.

At 400nm (400µ) our eyes recognize the color violet, followed by; Blue, Blue-Green, Green, Yellow-Green, Yellow, Orange and then Red at the end of the spectrum (700nm or 700µ). Our eyes have developed this way – for survival.

Humans are mammals, as we are warm blooded.  Cold blooded animals, such as snakes, see the infrared heat (infrared spectrum) of their prey. This is the same for mosquitoes.

Fish, such as salmon, piranha and cichlids all see infrared as well. While goldfish are the only members of the animal kingdom to have a visible spectrum that ranges from the ultraviolet to infrared spectrum.

Another example is bees – these insects see a spectrum that ranges from the ultraviolet spectrum (350nm or 350µ) to just below the infrared spectrum (650nm or 650µ). The ability to see ultraviolet means that bees can see very distinct color patterns of flowers in this spectrum of light – a key to their survival and also the flowers. Bees transmit pollen by contact from flower to flower.

Infrared imaging can be seen as thermal imaging – yes, that is an accurate statement. However, infrared imaging in the case that I am writing about refers to how these light rays are reflected, transmitted and absorbed. Robert W. Wood discovered this using experimental film in the early 1900’s. Wood discovered that the sky and water absorbed the infrared wavelength of light – demonstrated by turning black in the final image. Vegetation reflected it – demonstrated by turning white in the image.

In normal film photography and digital photography today, the tonal value of blue and green, for example, are similar, but still different. In black and white photography, contrast filters created greater levels of contrast between all the colors. This added depth and clarity to an image. Today this can be achieved using the contrast filters available to us in post processing, but there are a few of us still using contrast filters in front of the lens.

In Example Image 1, I have photographed Bigfoot Pass at Badlands National Park. I shot this using the monochrome settings on my camera and without using a contrast filter 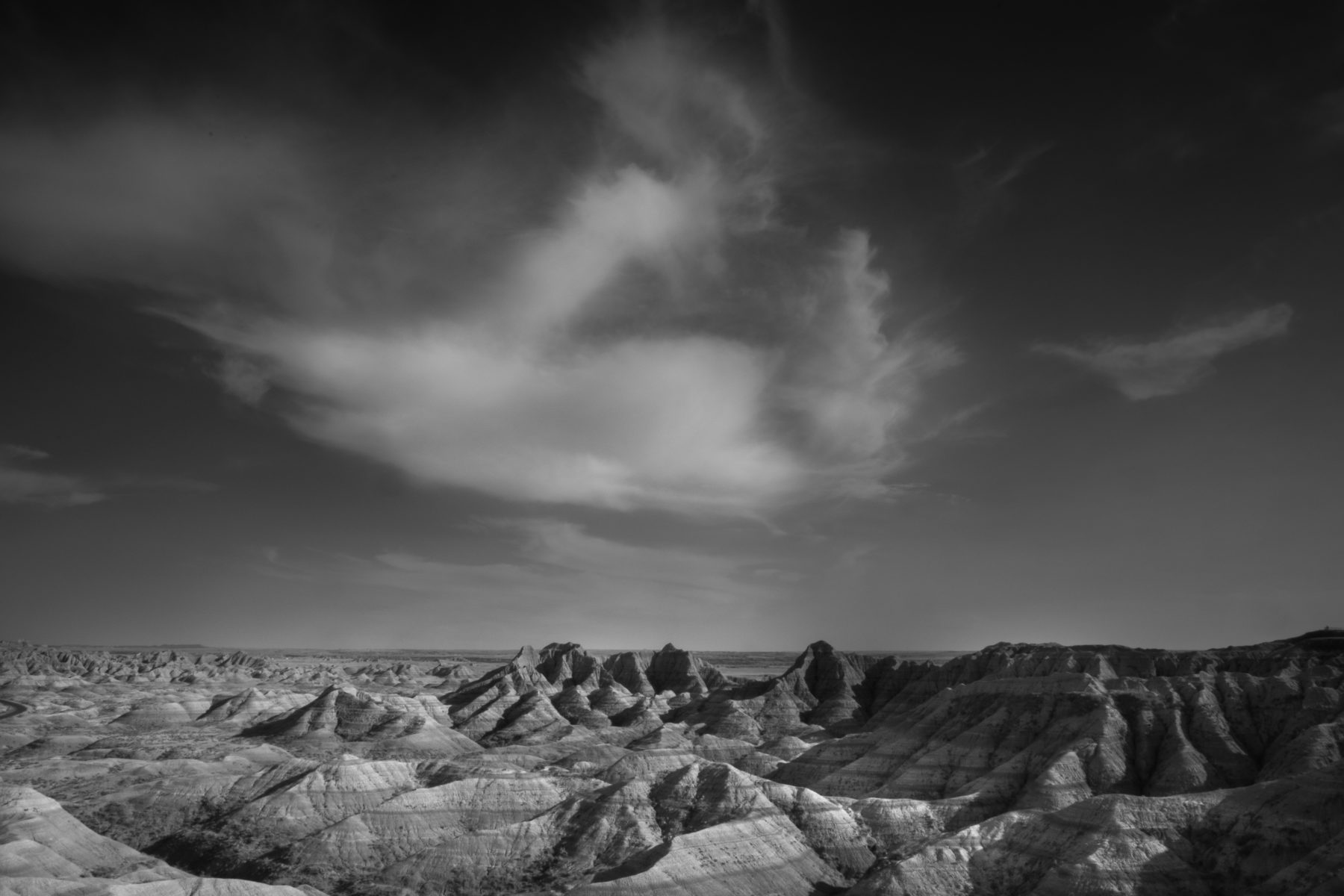 In Example Image 2, I have added a red contrast filter in front of my lens, which has created a greater contrast in the sky and thus a greater definition to the clouds and overall image. 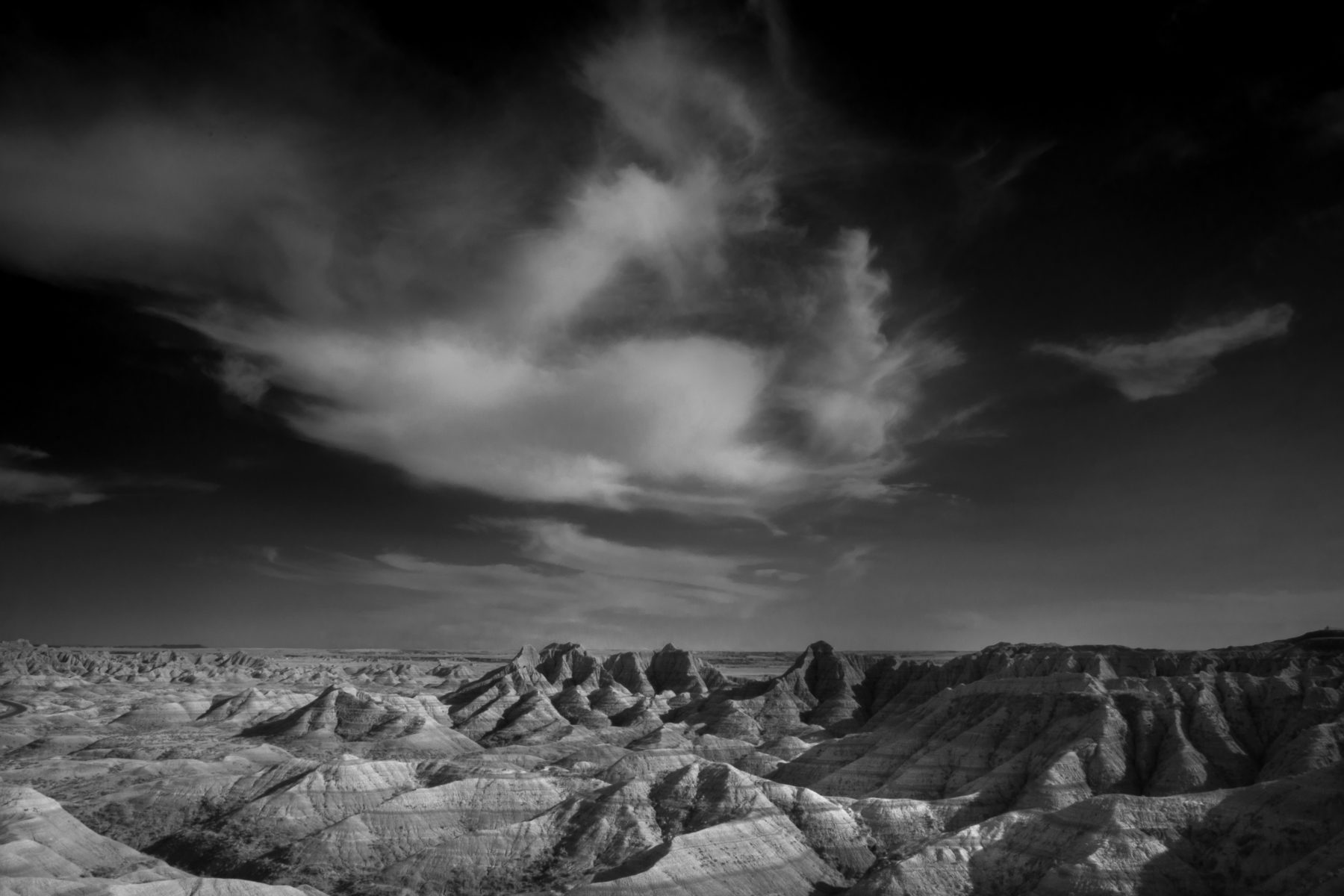 The advantage to using a filter in front of the lens vs the in-camera menu selection is that in using a photo software such as Photoshop or Lightroom, the in-camera filter selection (like the selection of the monochrome setting) is not recognized unless using the manufacturer provided software. The images having a filter in front of the lens are readily identified and once converted to monochrome, the contrast effect is clearly seen. Capturing the image in the camera correctly results in less time spent in front of the computer recreating your vision.

A different set of contrasts are available to us using infrared photography. Infrared film was sensitive to the infrared spectrum above 700nm (700µ). Digital sensors today are sensitive to this same spectrum of light, but cameras must be modified to capture it. In lieu of converting cameras, Singh Ray manufactures the I-Ray 690nm and the I-Ray 830nm. Placed in front of the lens, these filters remove the light wavelengths below their respective values allowing the near infrared spectrum to be captured by digital sensors.

In Example Image 3, I have photographed the Meeker Ghost Ranch near Custer, SD. This small ranch was built ca. 1880 and abandoned about 1920. It sits currently on US Forest Service land and is accessible after a short walk on an old dirt road. This image is in color. 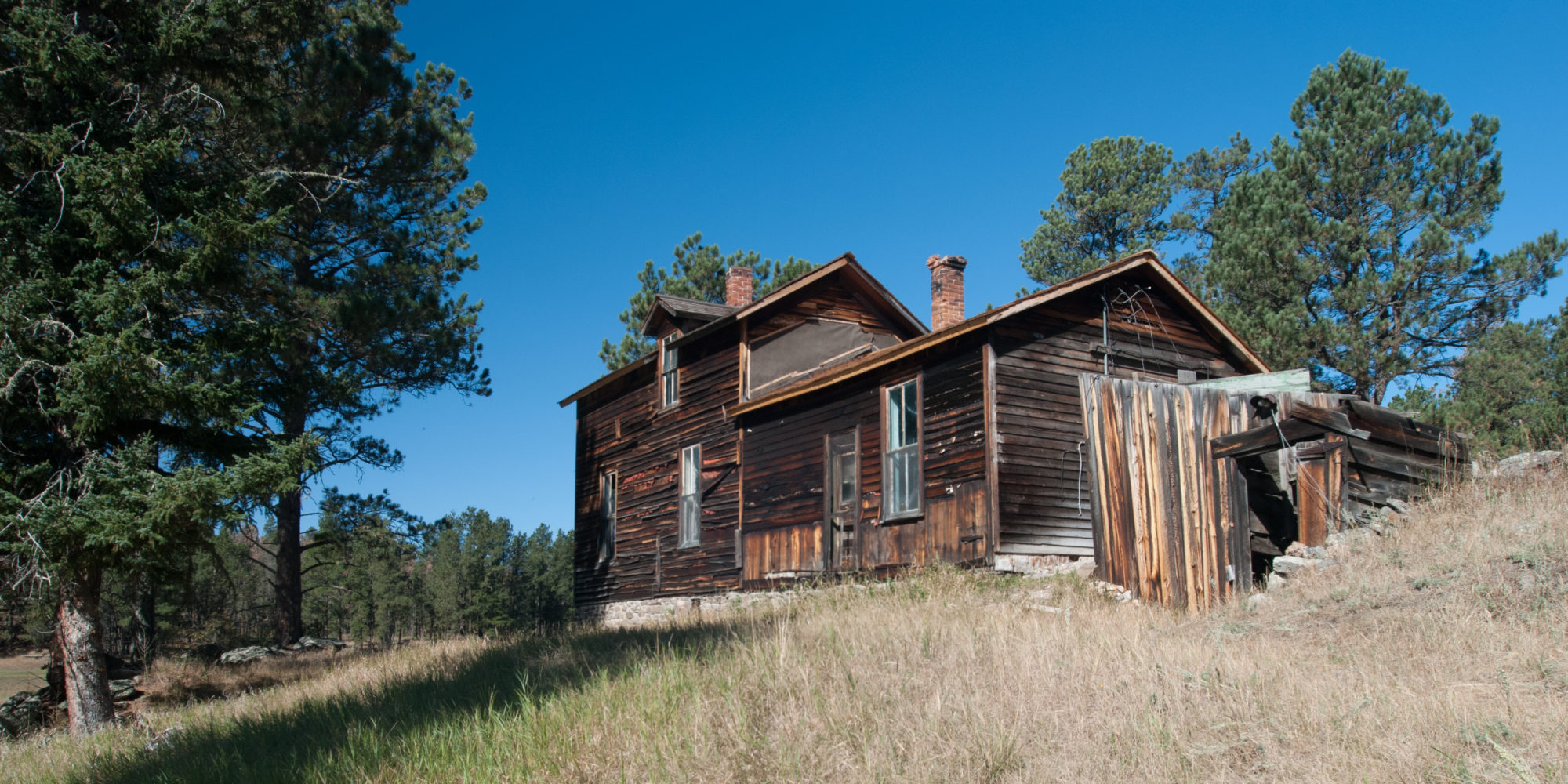 In Example Image 4, I have simply converted this image to black and white. 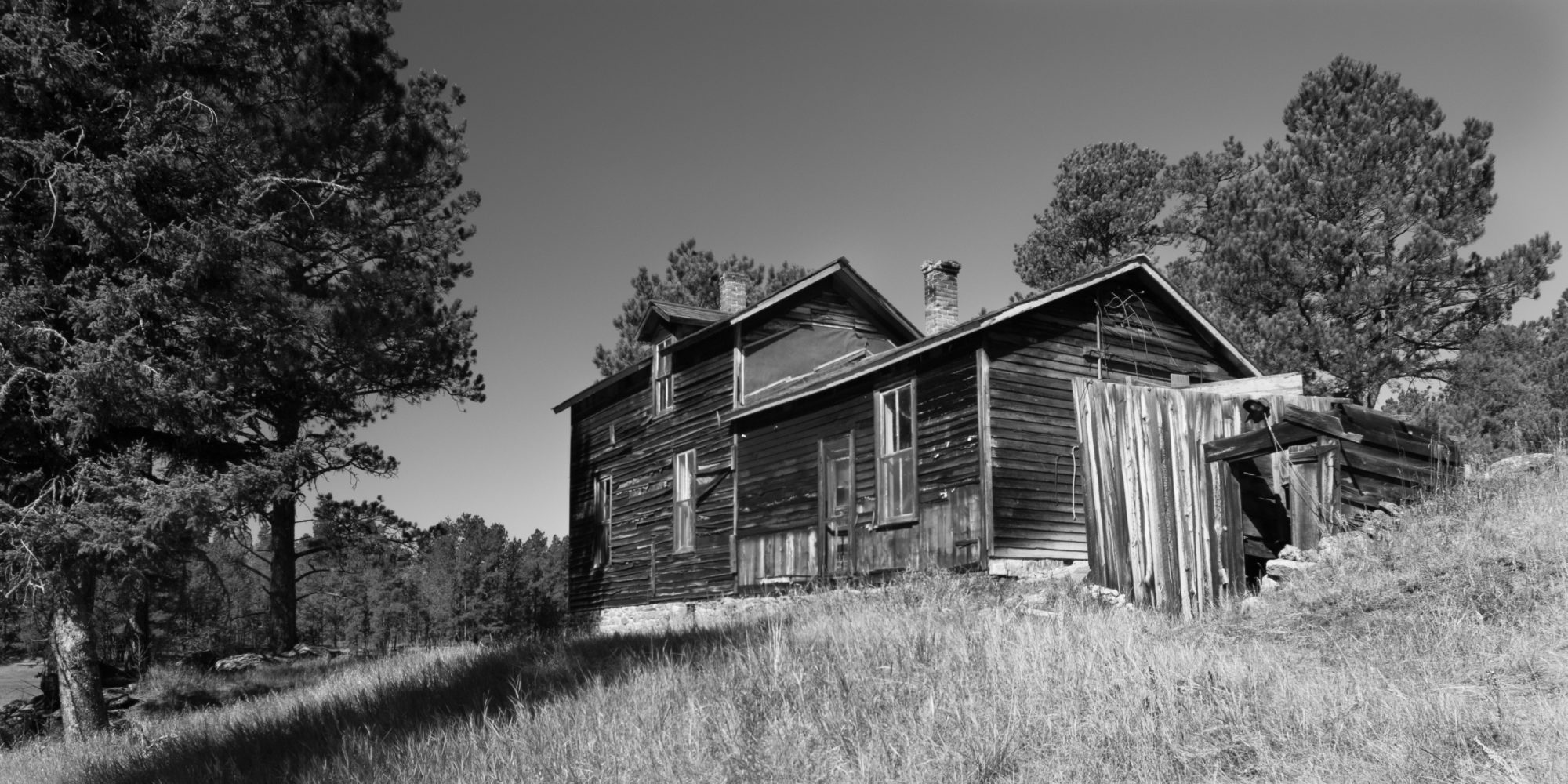 In Example Image 5, without changing the location I was standing I have used an infrared converted camera to capture the same image in the infrared spectrum at 830nm (830µ). 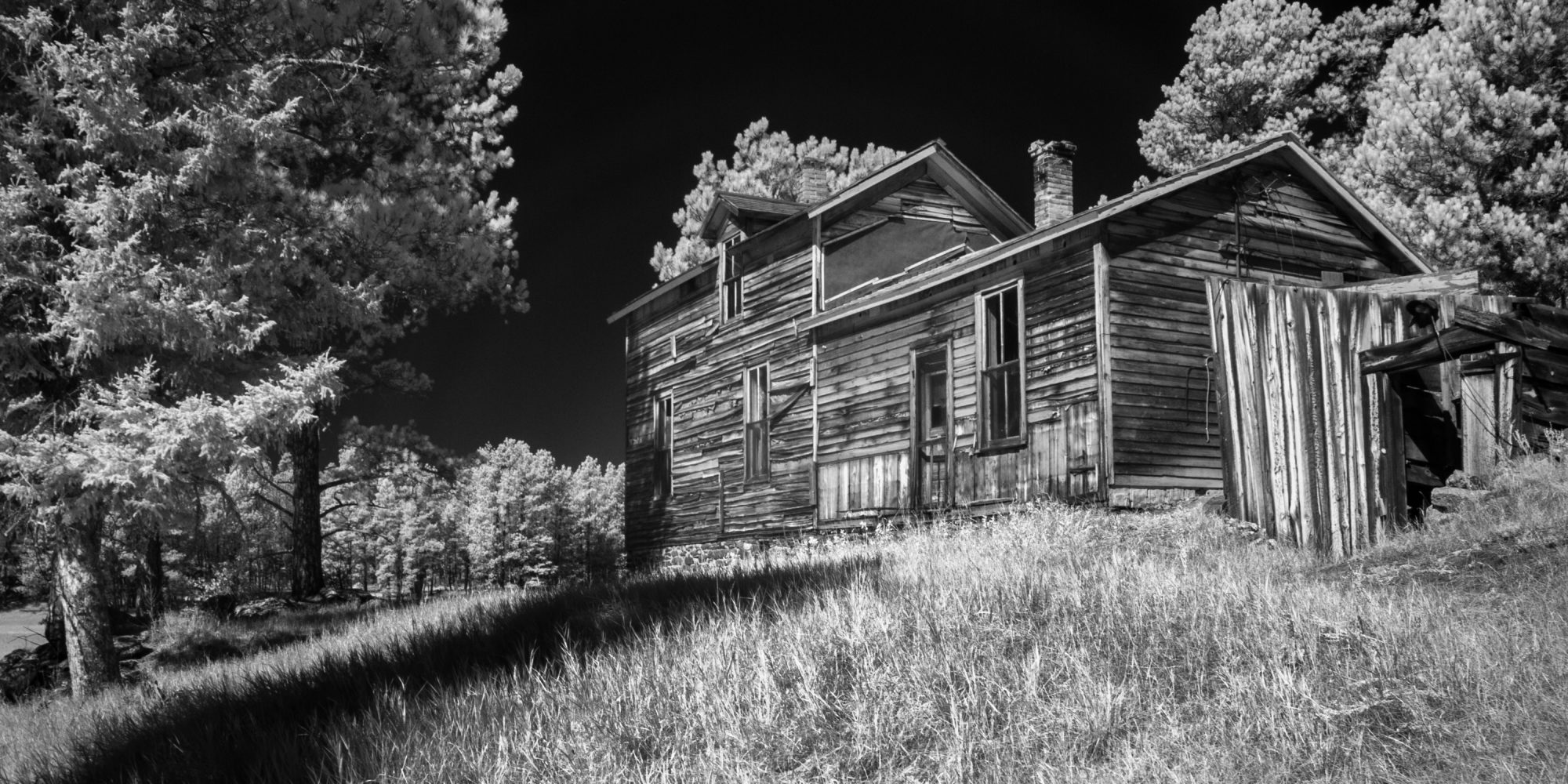 Comparing this to the monochrome image, the sky is evident first changing from a grey to rich black, trees are white to light gray. Looking closer, the details of the wood siding on the house can be seen – even the nailing pattern of the siding can be discerned.

These effects discovered by Robert W. Wood resulted in the United States developing photographic plates during the First World War. Infrared photography was now being used by the military in aerial reconnaissance. Rivers, trees, landforms, artillery pieces and so forth were much more easily recognized. Additionally, infrared imaging allowed them more clarity to see through the haze and smoke of the battlefield.

By the 1930’s infrared photography became popular with photography enthusiasts and film was introduced commercially. In fact, so popular that in 1937 there were more than thirty varieties of infrared film available on the consumer market.

Since then, infrared photography has seen a number of uses. False color infrared was developed by Kodak in the 1940’s. In the 1960’s, numerous album covers were shot using false color imaging. Jimi Hendrix, Frank Zappa and the Grateful Dead– to name a few – all issued albums with infrared cover photos. The dramatic and sometimes unexpected colors aligned perfectly with the psychedelic themes of the 1960s.

I began with infrared film in the 1980’s, developing slowly my own style, a technique to minimize the silver glow and the wood effect to yield sharp contrasts in dramatic images.

Today I use both an infrared converted camera and the filters offered by Singh Ray on a non-converted camera. My choice is dependent upon what I would like my final image to look like and what my message to the viewer is.