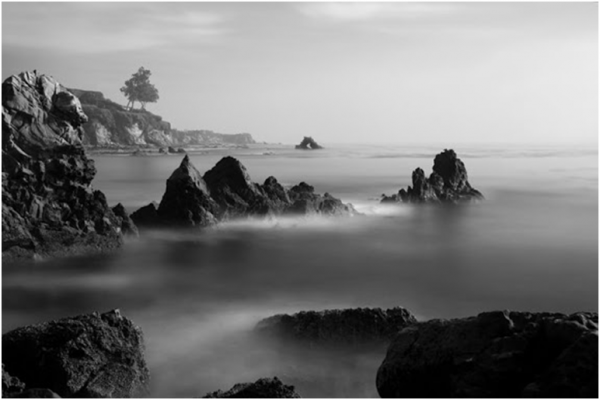 Steve Kossack now lives in Las Vegas, Nevada, which enables him to reach many of the most iconic natural wonders in the American West within just a few hours of driving. “What I have found amazing is how differently I respond to a scenic area after exploring it many times. This is especially true for those locations I have explored to the point that I wonder if I have exhausted all their visual possibilities. Of course the landscape does not change much, but I do.

I believe that if I look harder and longer, I’ll find more of the patterns and textures that produced the icons of a particular area. The hills and gullies that show the erosion, the uplift or the growth that has taken place since. If I like what I’m seeing, I usually sense that nature has repeated it somewhere nearby and it may even be stronger. Finding this other ‘iconic’ place helps makes photography such a great adventure!

A great example is the Page, Arizona, area just south of Glen Canyon Dam. The city itself is new — built in the late 1950s exclusively to facilitate the building of the dam. Prior to this immense project there wasn’t a road within hundreds of miles in any direction of this city of now over 7,000 people. In the summer months, the population swells considerably as this is one of the boating capitols of the southwest with Lake Powell just outside of town. However the winter months bring a quiet tranquility that provides the serious photographer with some of the best new landmarks of the southwest.

Back in in the ’70s most of us were stunned with great images of what appeared to be caves. We learned slowly that they were in the Page area but little was was really known for some time. Today we all know them as the slot canyons and along with the native guide companies and hundreds of their clients, we find many serious photographers competing for time and space in them almost every day of the year! They have become an icon along with Horseshoe bend, which was not even identified with a sign until a few years ago. There is absolutely nothing wrong with photographing these wonderful places. Standing at Sentinel Bridge at sunset in Yosemite is breathtaking. Zabriskie Point at sunrise is thrilling, as is the overlook at Wild Goose Island in Glacier National Park. My portfolio would be sad, indeed,  without all the images taken in iconic places that some might refer to as ‘clichés.’

THE SECOND WAVE (above)

After The Wave was discovered, it took me awhile to find and explore the surrounding area. Coyote Buttes —  both north and south — are beautiful areas that I’ve done a lot with over the years. On my most recent trip to this area, I’ve chosen not to even visit The Wave itself! This time the plan was different. Most will want to charge up to The Wave for early light. This is a strenuous hike and takes at least two hours. Beyond The Wave is a second formation just as striking but takes more time and effort and can be demanding physically after the long hike, but on this occasion I wanted the early light at the second formation. In many years past I had done late afternoon light with good results. However this necessitates a hike in the dark to get out which can be very difficult. I don’t recommend it! Reflected light is everything is the high deserts as clouds are a rarity. The low cross light of the winter months helps also, and getting the exposure right is always a major consideration. This is a subtle subject and it only lasts minutes. I used a 4-stop soft-step Graduated ND filter and my trusty ColorCombo Polarizer to capture this image. 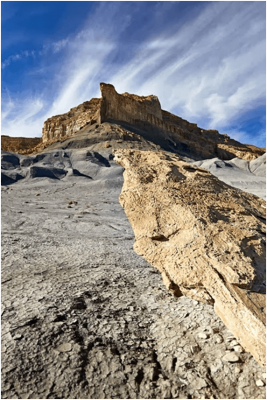 Again, for the life of me I can’t see this composition as anything but a castle, or fortress of an empire city! A no brainer for an exposure in mid-afternoon, all that was needed was the right angle to capture the cloud formation above it. The use of a longer lens compacted the foreground and focal point. The lines of foreground erosion were an important aspect. The hard clay like texture turns to mud when wet and traveling in any motorized vehicle becomes impossible. This area is both beautiful and very dangerous. A Warming Polarizer was once again used for the same reason as the prior example and also to cut the glare of the highlighted rock with special attention given not to over polarize the already deep blue of the sky. 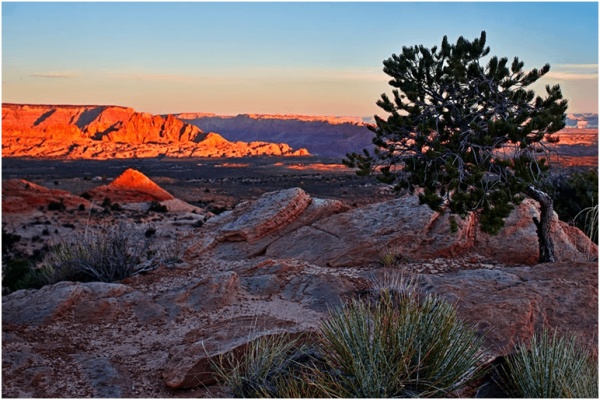 The struggle for life is a favorite theme of mine. In the desert the struggle is found just about everywhere! ‘Seeing Small’ is what I do in vast vistas such as this. In truth they are what I like to call ‘reverse images’ — the main portion of the image is distant and I need points of interest to lead up to it. In this case Horseshoe Bend is just below the far horizon, and with the help of streaking morning light, I wanted to tell the story of its surroundings using the tree and shrubs to demonstrate.

The jewels of the landmarks of America’s southwest are well hidden. They demand time, dedication and discipline to uncover. Time well spent in my opinion.