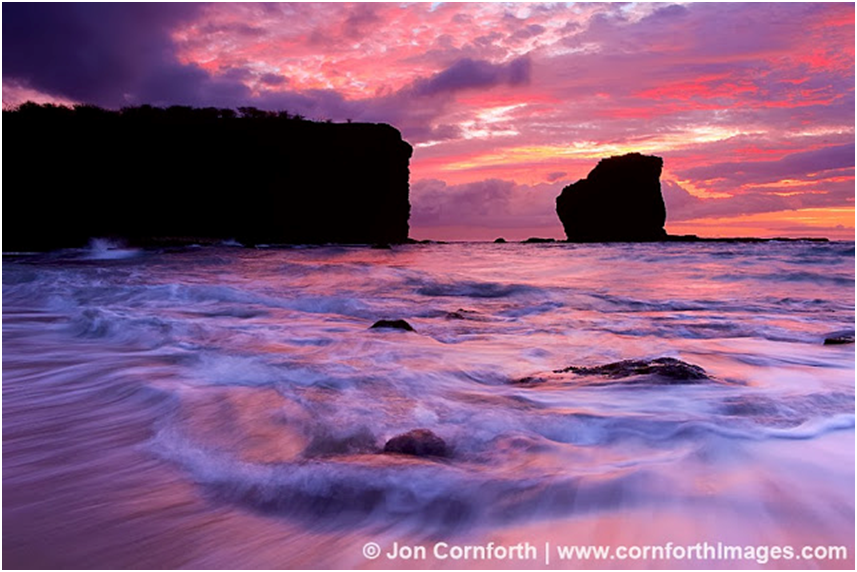 To follow the ventures of nature photographer Jon Cornforth over the past couple of years, you would need a boatload of scuba and underwater photogear. “Photographing the lives of all the various whales and other underwater wildlife has demanded almost all my time and attention. But there are those brief occasions when I have time to use my Canon 5DmkIII with Zeiss lenses and Singh-Ray Filters to capture some impressive scenes above water. Here are four recent examples.

I photographed the dramatic scene above while camping with my family last December in Hawaii. Puu Pehe, or Sweetheart Rock, rises from the ocean between Hulopoe Bay and Manele Bay on Lanai’s south shore. Hawaiian legend tells a tragedy of two lovers. Makakehau took Pehe from her home near Lahaina back to Lanai and hid her in a sea cave at the base of these cliffs. One day while gathering supplies, he noticed a storm brewing and started back, only to find Pehe drowned by the waves. Stricken with grief, he gathered her in his arms and cried out to the gods and his ancestors to help him climb the steep rock where he buried her. He then jumped from the 80-foot summit to his death. I created this image using my Canon 5DmkIII, Carl Zeiss 28mm f2 ZE lens, and Singh-Ray 4-stop Soft Graduated Neutral Density filter. 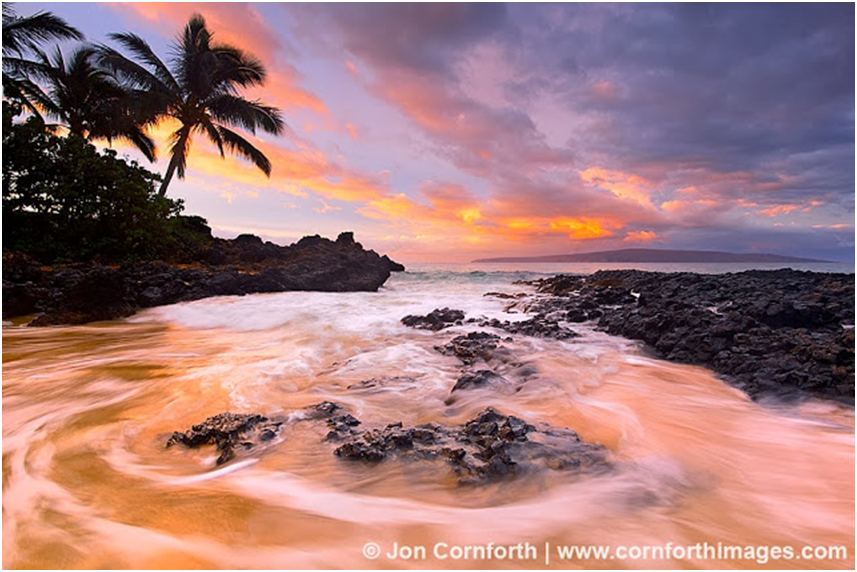 Several times over the years, I have visited this iconic beach located south of Makena on Maui. Last January, I got lucky with this dramatic light during one of the mornings I photographed it. There was a lot of rain the night before, which meant that there were still a lot of clouds in the sky at sunrise. As the sun rose in the east, this spectacular lightshow briefly lasted for only a few minutes as it stretched across the horizon over Kahoolawe. Anyone who has ever visited this picturesque spot knows that at sunset it is usually overrun by wedding photographers, but thankfully, I had the beach all to myself so I did not have to digitally remove a wedding party from the scene. I created this image using my Canon 17-40mm f4 lens along with the LB Warming Polarizer and 4-stop Soft Graduated Neutral Density filter. 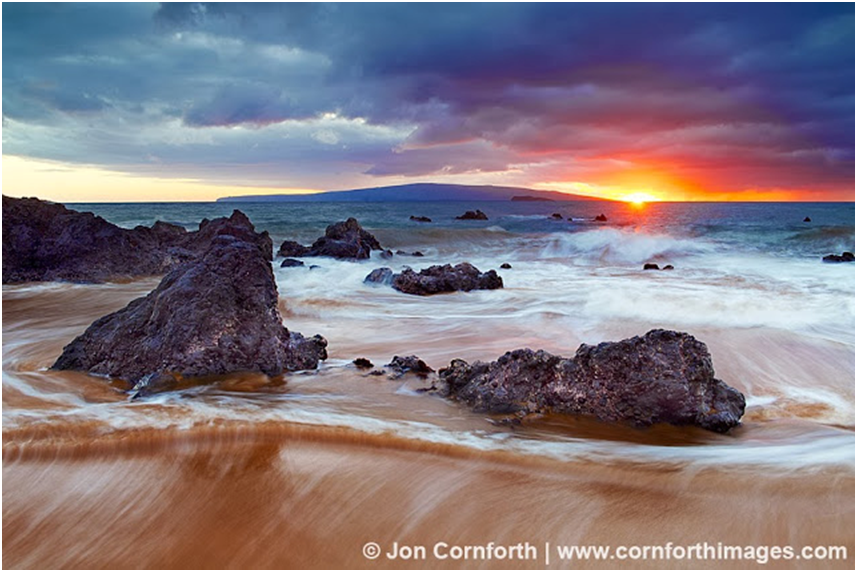 Most of my recent trips have been dedicated to wildlife, but that does not mean I have forsaken landscapes. I photographed this dramatic sunset from a quiet beach just south of Wailea. I wasn’t confident that the sun would shine through this hole in the clouds on the horizon until the last possible second, but fortunately it did. I also timed my exposures to record the gentle wash of the waves over the lava rocks in the foreground. I created this image using my LB Warming polarizer with a 3-stop Reverse Graduated Neutral Density filter. 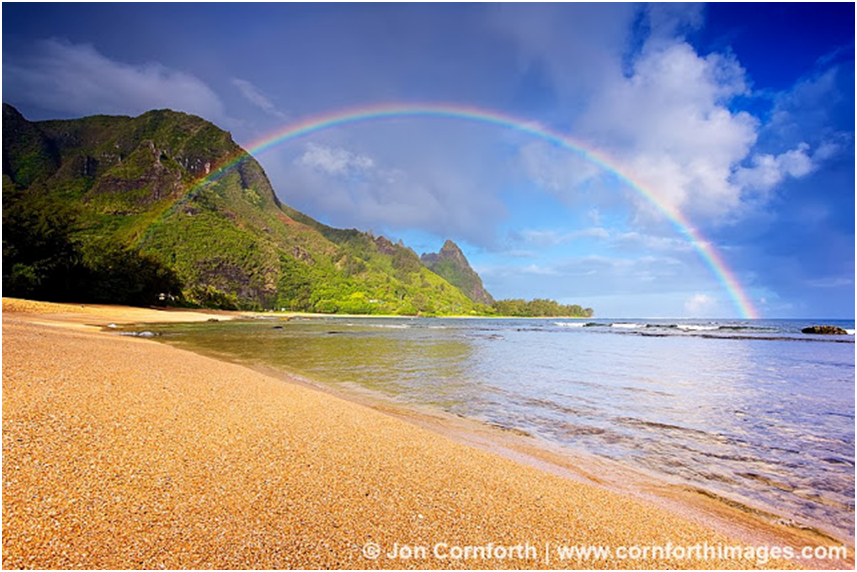 I photographed this dramatic rainbow over Tunnels Beach during my family vacation to Kauai in July. This amazing light only lasted for a minute, during which it was pouring rain. Of course, I forgot to bring an umbrella, but was fortunate that a nice local that I had befriended the previous day just happened to be out for her morning beach walk and had one with her. I asked her if she would assist me in keeping my camera dry and she happily obliged. While she held her umbrella over me, I quickly set up my tripod, pulled my camera out of my backpack, and carefully placed my 4-stop Soft Graduated Neutral Density filter on the lens. I only managed a few images before this ephemeral rainbow disappeared. Also, it’s worth noting the overall amount of time required to create this image. I was staying with my family in Poipu, which is located on the south shore of Kauai, but Tunnels is located on the north shore. So, in order to be at the beach at sunrise, I had to wake up at 4 am and drive 1.5 hours in the dark. I did this 5 mornings in a row before finally being rewarded with this image. By the time I returned to my family, it was late morning and they were just rolling out of bed. I invested over 30 hours of my time to create this image, but only experienced this magical light for less than 60 seconds. I hope that you will agree that it was worth my effort.

Jon frequently publishes images and articles with Outdoor Photographer and Popular Photography magazines, as well as offering fine art prints and images for other editorial purposes. You’ll find him active on social media where he regularly shares his most recent adventures as well as provides photography tips. Jon always has photography tours in the works, so consider joining one of his future expeditions! Visit Jon’s website.