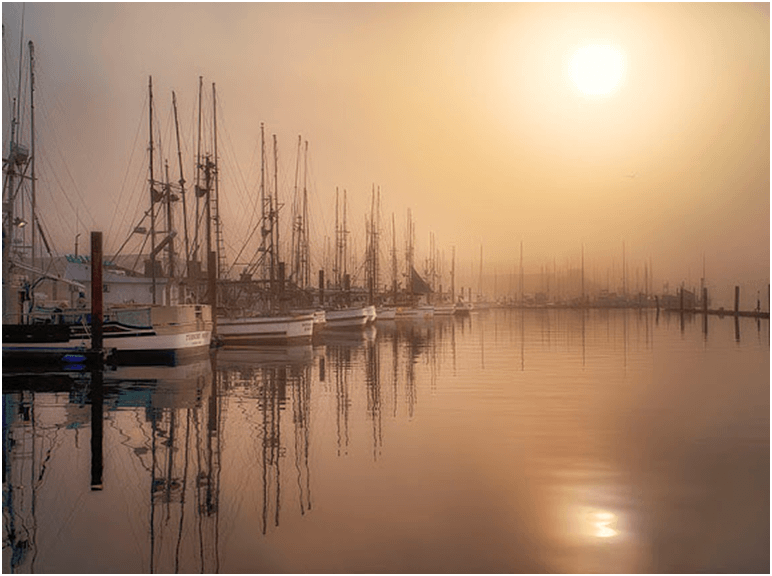 As a result of all that travel and shooting, I have been able to post over 150 photos in the New Images section on my website. That would include the image above of sunrise through fog with boats at Newport Harbor, Oregon. Here I used my Pentax 645D with a three-stop soft-step Graduated ND filter over the sky. I like the softness and moodiness of the image.

I have also posted another 130 images that have been ‘reprocessed.’ These are some of my best film images that I recently rescanned on an Imacon drum scanner and then upgraded by applying my current level of post-processing skills. These new images — now designated with the number 2 in front of the file name — are significantly improved in quality. 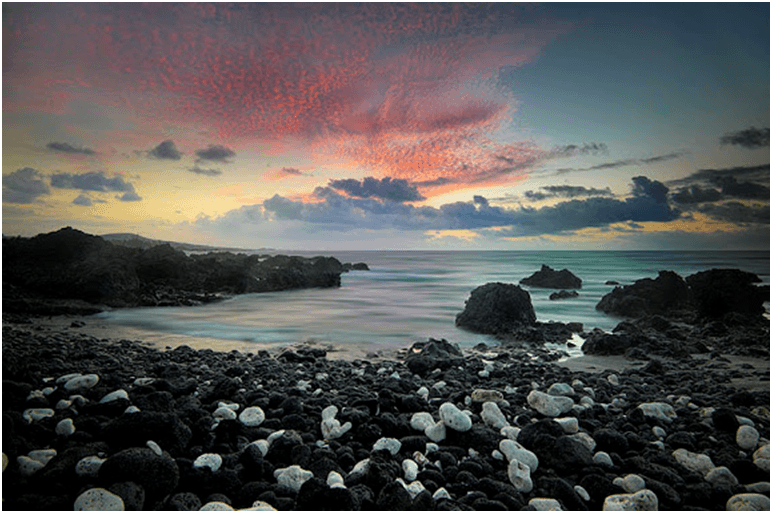 For many years, one of my specialized markets has been producing fine-art images of very high image quality and resolution, such as this image of a sunset with white coral beach on the Kohala Coast of The Big Island. A two-stop hard-step Graduated ND filter was used with my Leica M9. I had put my camera in the bag and was headed out when the sky lit up again, well after the sun went down. I love such pleasant surprises. Almost all of the images on my site can be enlarged to very large proportions for decorative and commercial designers. When I scan an image the file size is between 150 – 200 MB on the Imacon, but I no longer shoot with film cameras. The scanning I am doing now is just to upgrade the original scan using a higher quality Imacon scanner and scanning it at the highest resolution this scanner will allow.

Eighty percent of my images today are made with the Pentax 645D which produces a 112 MB file. The remaining 20% are made on my Leica M9 which produces a file size of around 50 MB. Lenses for this camera produce exceptionally sharp and detailed images, and I can enlarge them way beyond what I could with my similar-size Canon files. I’m currently generating image files ranging from 112 to 175 MB that can be enlarged to enormous sizes and still retain excellent sharpness and detail. Actually, I was not surprised at the improved quality because I rescanned most of them on the well-known Imacon scanner, which produces more dynamic range and sharpness than I could get with my old scanner. But, I must say I sure like the crisp look of a high resolution digital file over a film scan. One of my agencies agrees and sometimes will reject a film image because it looks too soft. It’s really a matter of taste in my opinion. Because I’m a sharpness freak, I just prefer the digital look.

Of course image quality begins with locating and capturing the right images in the field. My approach is always the same. When I arrive at a new location, I plan to stay with it for several days — or as long as a week in many cases. My start-up procedure simply involves keeping a camera at my side as I just walk around for a while. For a new scenic location I will usually plan to stay several days at least. I will spend a good amount of time scouting out possible locations. I usually like to see as many locations as I can in a particular area when I first arrive, making mental notes of possible shots and then return as lighting/weather conditions change. This gives me several possibilities to select from. I almost always have my camera with me because I have been surprised several times when picture possibilities pop up unexpectedly. Sometimes, I just don’t want to leave my camera in the car in remote areas for security reasons.

I often visit the same location many times until I achieve the image I am after. I usually know when I come upon this kind of emotionally powerful scene because, while creating the image, I literally begin to shake, and I start babbling about how great the scene is, even if no one is listening. I feel very blessed that I am able to do something I feel so passionate about. I just seem to be wired that way. That being said, I think there is a lot one can do to foster an interest in photography that one day may become a passion. I love nature and want to be out in it as much as possible. I am also a fly fisherman. I find the same satisfaction locating, hooking and landing a good trout (although I release all my fish) as I do in bagging a good photograph. The thrill of the hunt I guess. Also, as my daughter has become interested in photography my advice to her is ‘photograph what interests you. You will always do the best job with what interests you most. 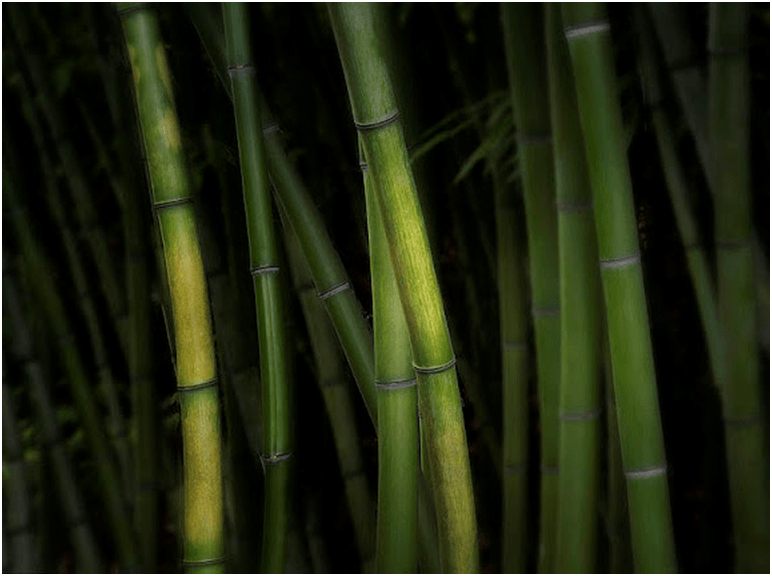 I use a Singh-Ray filter on almost every picture I take, including this close-up of bamboo in Oregon. I used my LB Neutral Polarizer to cut down a bit of the glare on the stalks. I like how just a few of the bamboo stalks are lit against a dark background. I use both Warming and Neutral Polarizers from Singh-Ray a lot. A polarizer is the one filter effect that is hard if not impossible to replicate in post production. To balance out the light intensity of a sky with the foreground, when a scene has a straight horizon line, and is not cluttered with a lot of branches or other things, I very frequently use the Graduated ND filters. This saves a ton of time in post processing. I use both the soft and hard-step versions depending upon the transition of the light and dark areas, and how distinct the horizon line is. Sometimes the only way to balance out the light and dark areas is to layer an image in Photoshop, but it sure is easier using a filter when the image is first made.

I see no difference in the way my various resolution cameras work with these filters. I have used them with many film cameras from 35mm to large format and with a wide variety of digital cameras from 11 to 40 megapixels. The quality is always there in the image. 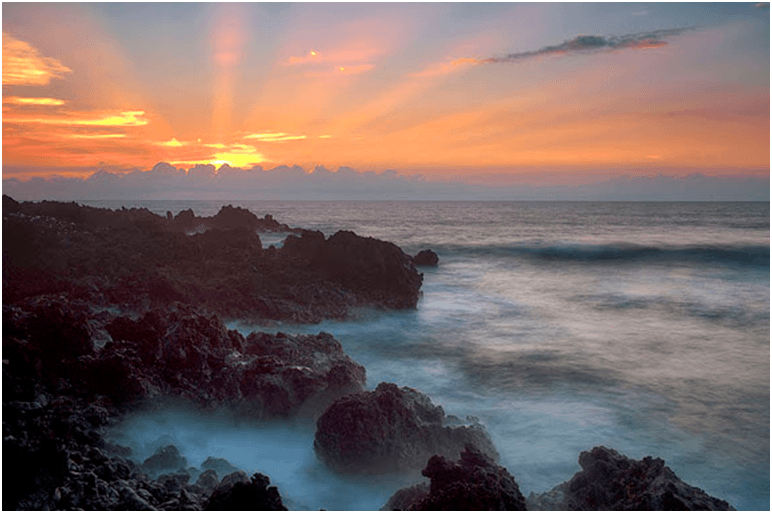 I believe my higher resolution cameras will more than pay their way because many of my clients are printing to very large sizes and need a file of this size. If I didn’t have these clients I probably would stick with a smaller resolution camera, although I must admit I love the detail rich files from my Pentax 645D and may just use it anyway. The only other camera I use besides the Pentax is a Leica M9 which I mainly use for travel photography. This image of a sunset with ‘God’s rays’ on the Kohala Coast of Big Island, Hawaii was captured with my Leica M9. A two-stop hard-step Graduated ND filter was used. I like that I was able to include both the blurred ocean in the foreground and the form of a wave out further, even though it was a very slow shutter speed.The quality of the M9 files is outstanding, and while I can’t enlarge to the size of my Pentax 645D, I nonetheless get excellent prints from this camera. Pentax has produced a few new lenses in the last couple of years, but mainly I purchase used Pentax lenses which are of exceptional quality. New Pentax 645 lenses are rumored to be coming out in 2013.

Like most photographers, I would rather spend my time in the field photographing, but the reality is that I must also work long hours at my computer, processing, filling orders, and generally keeping paperwork accurate and up to date. Right now, when the weather isn’t the greatest outdoors, at least where I live in Wilsonville, Oregon, I try to put together inside photo projects like photographing seashells, or flowers, but occasionally I can still get out for some winter photography.

You’ll want to visit Dennis’ website to appreciate just how many impressive scenic and nature images he’s gathered over his years as a fine-art photographer.