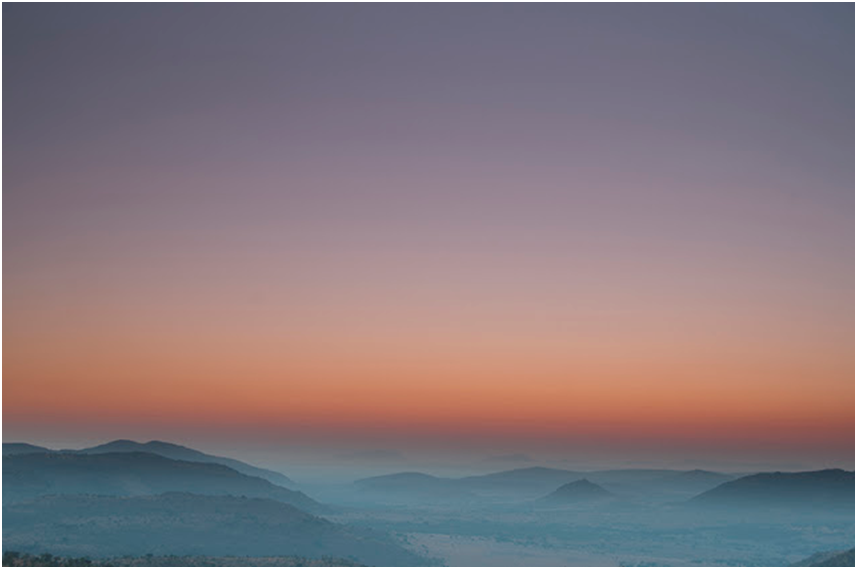 Pilanesberg is a ‘super-seven’ park meaning that it has the ‘big-five’ animals (buffalo, elephant, leopard, lion, and rhino) plus cheetah and wild dogs, making up the seven animals most visitors want to see and photograph, but I have found this park to also be a prime spot for shooting landscapes — or what I call volcano-scapes.

The park is situated on the remains of an extinct volcano that was active just a few thousand years ago. Unlike the Ngorongoro Crater in Tanzania, whose volcano wall has not collapsed, the high Pilanesberg volcano wall collapsed inwards so the park comprises many small hills. This means that wherever you are in the Pilanesberg you are surrounded by hills that provide backdrops to your photographs that are great subjects for landscape photographs.

The image above was taken from Lenong Viewpoint with my Nikon D300S with Nikon 18-200mm lens, using a Singh-Ray 2-stop Reverse Graduated Neutral Density Filter to photograph the hills and sky at twilight. Note the mist in the valleys below. Lenong is one of the highest hills in the park (about 1500 meters above sea-level). It’s an ideal spot to view the sunrise. We try to arrive at Lenong at least 45-minutes before the sun rises in order to set up our tripods and get some twilight shots as well as the sunrise.

This next image of a Pilanesbwerg sunrise was captured once the sun appeared on the horizon. Here we zoomed in and used a 4-stop Singh-Ray Reverse Neutral Density Graduated Filter as the sky was very bright around the sun. 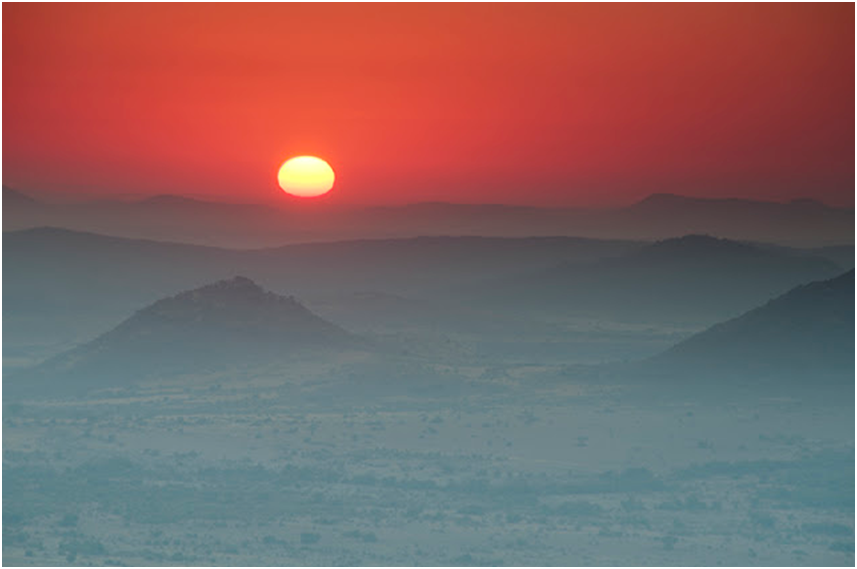 Once the sun was up we then focused our attention from the eastern part of the hill to the less bright southeastern view. 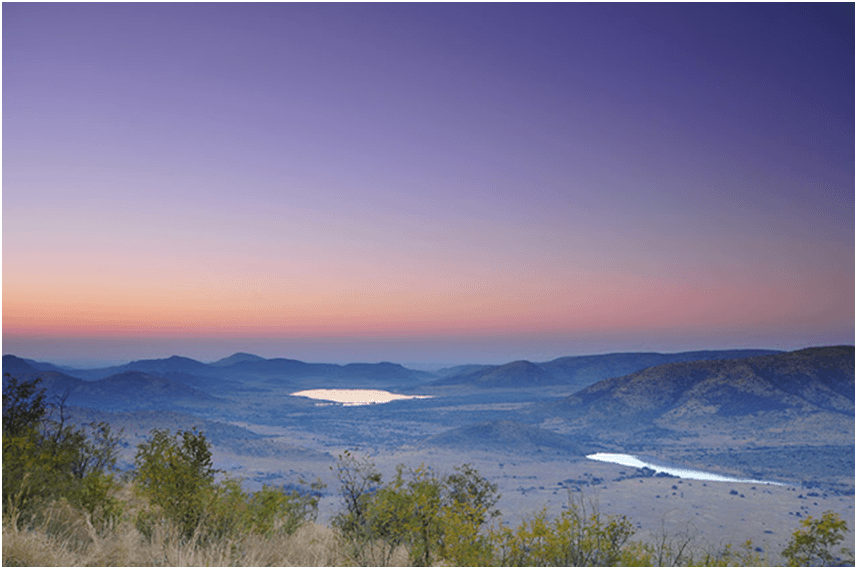 Here you can see Lake Mankwe (the large circular lake situated in the centre of the park) and the long thin piece of water that is Makorwane dam. Here we used a Singh-Ray 2-stop Reverse Neutral Density Graduated Filter as the sky was not as bright as where the sun was rising.

Some people ask us if the investment in Singh-Ray filters is worth it. Our answer is a definite ‘yes’ but you judge for yourself. Here is the same photograph as the one above with no filter. 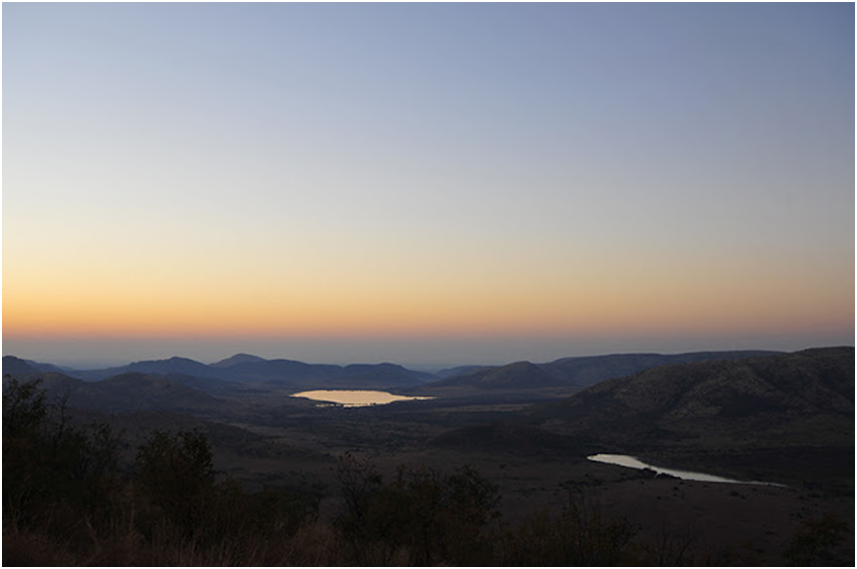 Without the ND filter you must make a choice and either expose for the sky, as we did in the above image, or expose for the land. Had we exposed for the land the sky would have had no colour. As it is the colour is only in the thin band on the horizon and above that it is white, while in the image where we used the ND filter the rich colour extends all the way up from the horizon to the top of the photograph and there is lots of detail in the land as opposed to a dark mass.

Another great place to photograph landscapes is from Tshukudu Bush Lodge which is situated high on a hill inside the park overlooking a large waterhole on the plains below. 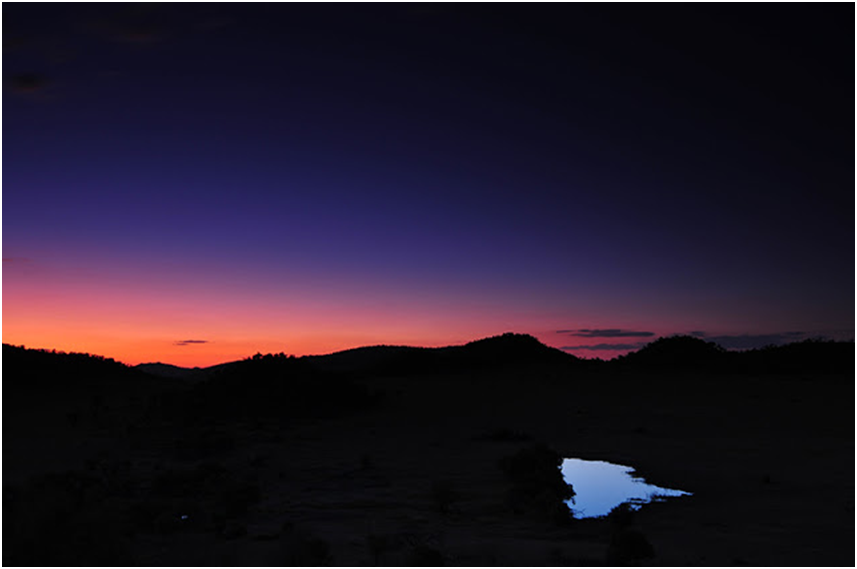 This photograph was captured at twilight, just after the sun had set, and we used a 3-stop Singh-Ray Reverse Neutral Density Graduated Filter. You may have noticed that even though the lens I was using is 18mm at the widest opening, I was zooming to only 24mm. This was to prevent vignetting where the filter holder could be seen in the frame and the corners of the image would darken.