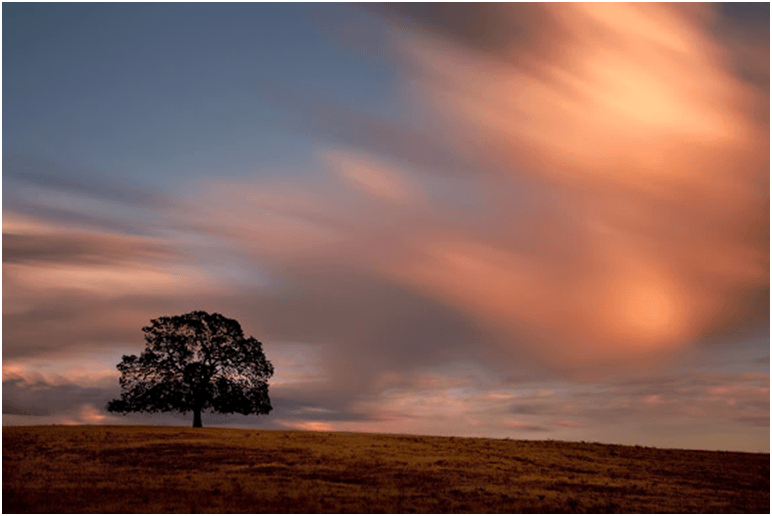 I would go as far as to say it saved my trip! The way the 10-stop neutral density filter expanded my creativity was beyond my expectations. I love this filter, but imagine my surprise when I came home one day and saw the 15-stop Mor-Slo filter sitting there on my counter (insert exploding head noises here). As soon as I saw THIS little gem, I was eager to find the time to get out and play with it.

When I’m not on the road working on my own portfolio or teaching workshops with the Aperture Academy, I’m at home. And there are often those nights where the sunset looks to be promising and I have the time to go out and shoot. Over the years I’ve found a few nearby spots that I can reach in time to produce some nice frames. On this particular evening the clouds seemed to be shaping up nicely to the east, which led me to one of my favorite locations. This simple scene of a tree in a field really works for me. I’ve been photographing it since 2008, and I love the way it sits on this hill and really creates a nice juxtaposition with the sky. The more dramatic the sky becomes, the better they work together.

When I arrived, I had the task of figuring out my starting point for this new filter. I took the filter out of the sleeve, and held it to the sky. You can not see ANYTHING through this filter. It is as dark as a welder’s mask. The first lesson I learned was even though the scene was quite bright, you still need to set the composition completely, and FOCUS BEFORE you add this filter. The 10-stop will allow you some visibility in bulb mode, and if it’s bright enough outside, you can focus and compose in live-view with that filter on. Not so with the 15-stop.

Once I found the composition and put on the filter it was time to start. But where and how to start!? I’m not one for math, so rather than start out with a math problem. I begin with my gut. I typically start about 50 seconds with my 10-stop filter and make the shot. Then I check the histogram and adjust for my second frame. With this filter I started at a grandiose 70 seconds still about 30 minutes before sunset…with the sun shining directly on the scene. I liked the shot but it was still quite dark, even at 70 seconds. My next frame was 300 seconds, using a 3-stop GND filter along with it to help hold the sky back a little bit. This worked like a charm.

The clouds weren’t all in the right spots. I could hear my friend — who had shown up to shoot this spot as well — saying he wasn’t overly excited by his images. I was still shooting throughout most of the time he was making exposures, so I didn’t know what I was going to get. When my exposure finally stopped and I saw what was on the screen, I was very happy.

These longer exposures really allow the clouds time to move throughout the scene and create some added drama. I found the filter also helped to saturate the colors some, while not changing the overall colorcast. For me what made this image was the movement of the clouds. Without that ‘action,’ the image doesn’t have as much impact — and without this filter, creating such movement isn’t possible. I went on to take a couple 400 second exposures after the frame I liked the best, but I found the clouds had moved too far away and I didn’t get the same interest as the the frame you see here.

I can say that this new Singh-Ray Filter filter will be a game changer for me in the way I approach shooting landscapes in the afternoon and evening. If there are clouds and wind, there is magical action possible. And now I can really get some long exposures during almost anytime of day. I feel like I’ve only scratched the surface of what is possible with this filter. Now I look forward to my next outing and really putting my Mor-Slo 15-stop to the test.”

Editor’s note: If you don’t like doing math, there are a number of smartphone apps available to help you calculate very long exposures when using a 5-stop, 10-stop or 15-stop Mor-Slo filter. They range from free to about $3, and can help simplify the math when you’re in the field. Several include a countdown timer for when your exposures are longer than 30 seconds. Some do not include 15-stop filter density in their settings, but do allow for “stacking,” so for 15-stops just set it as if you’re stacking a 5 and 10-stop filter. You might consider these for starters: LongTimePro, or NDTimer.