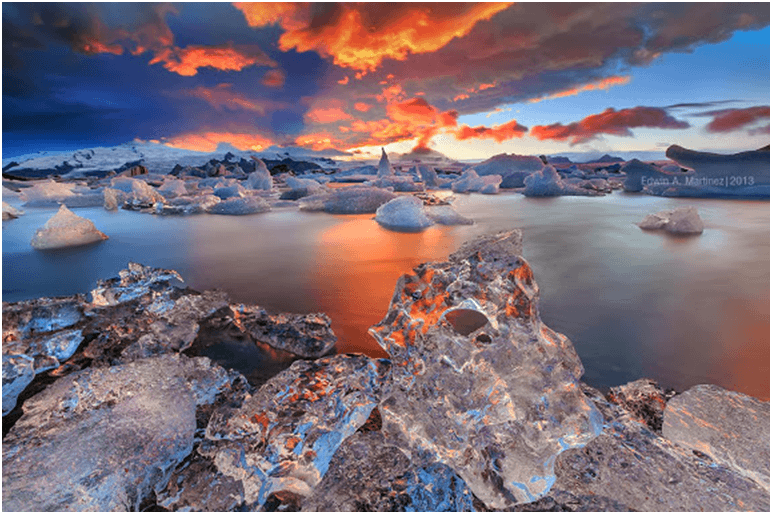 One of the most sought after locations for both travel and landscape photographers is Iceland — the land of ice and fire. Iceland is a Nordic island country bordered by the Atlantic and Arctic Oceans, plus the island is geologically active with many volcanoes, so the weather varies between different parts of the island. Generally, the south coast is warmer, wetter and windier than the north, and the central highlands are the coldest. 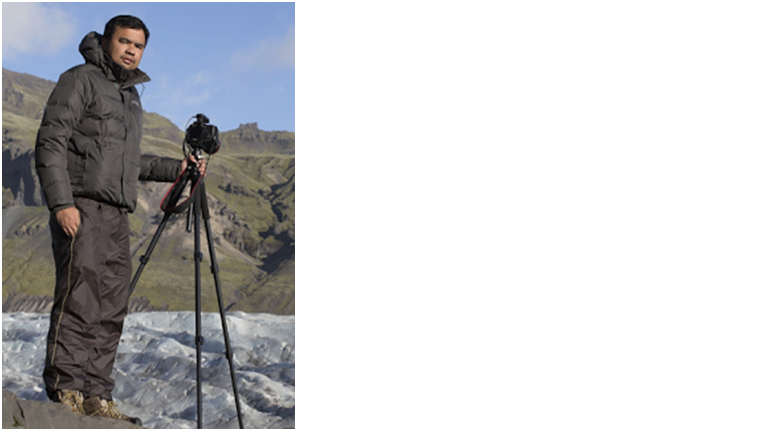 As a veteran photographer from a tropical country, preparation for the Iceland tour was quite a different challenge. Planning was a key factor to handle most of the external challenges such as climate, temperature and time zone. The trip started September 8, 2013 and the flight took almost 28 hours including layover from Manila to Taipei then Amsterdam.

I spent a total of 10 days in Iceland with 8 days of shooting. Out of the 8 days, weather only provided me with 4 days of fabulous light. Our nights were spent with clouds hovering and covering the elusive Aurora Borealis. The tour concentrated mostly in the south areas from Snaefellsnes National Park to Vatnajökull National Park and finally Jökulsárlón, the glacier lagoon where two of the four fabulous light shows happened.

Jökulsárlón literally means ‘glacial river lagoon.’ It is a large glacial lake in southeast Iceland, near the borders of Vatnajökull National Park. It stands 1.5 kilometres away from the ocean’s edge and covers an area roughly 18 km2. It is also the deepest lake in Iceland which is about 248 metres (814 ft) depth. Shooting this place was a dream come true. The topography is unique and is a true playground for any landscape photographer.

It is best to shoot this location during sunset, just as the sun settles over the mountain ranges facing the lagoon from the parking area. The place is packed with both tourists and photographers trying to get that winning shot. I have long been preparing myself both mentally and physically for this and during our first sunset I tried to familiarize myself with the place and how the wind blows and where the light would hit among the elements.

I waited for the sun to set just below the mountain ranges and waited for it to illuminate the sky, the presence of cumulus clouds made the sky brilliant. I chose to use the 3-stop Daryl Benson Reverse Graduated ND filter in photographing this scene as it effectively holds back the bright band of the sun at the horizon without darkening the upper portion of the sky.

One of the key factors in shooting floating ice from the glaciers is the wind. After studying how the ice moves around, I positioned myself in advance to a pre-visualized design and waited for the right moment.

The photograph Ice Candies at the top of this story was captured on the second day, where light was more subtle in colors but more dramatic because of the crepuscular rays. I waded into thigh deep water since most of the photos I have seen of Jökulsárlón are photographed from the coastline; I wanted a deeper perspective showing the ice in its natural state in the water.

I also opted to capture it in a much longer exposure we see below. I wanted to flatten the tiny movements of water in the lagoon, to have that contrast between the texture of ice and glacial water. Again the use of the 3-stop Daryl Benson Reverse graduated neutral density filter was the obvious choice. It handled the light from the horizon better and does not dilute the fading ray of light in the upper portion. 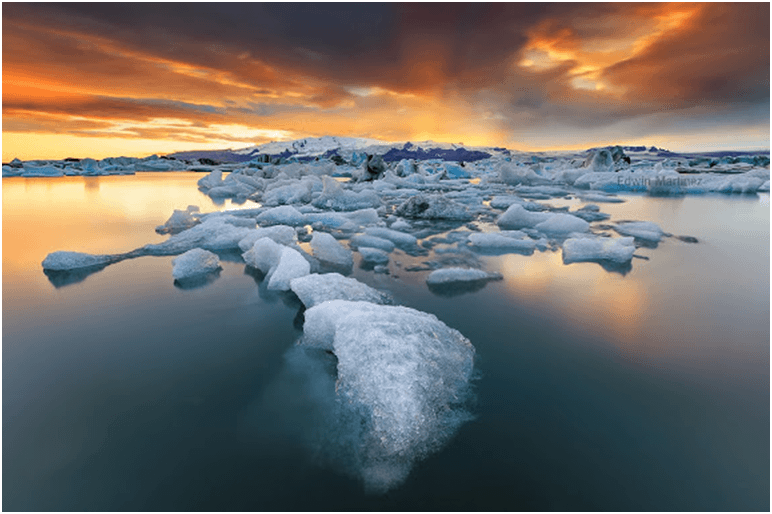 Iceland is truly an amazing place to practice and capture timeless and enduring landscapes. It has all the elements needed packed into a very small and volatile package. The weather is a challenge as it changes every 5 minutes. But all of these obstacles are worth it as you capture some images that are truly unique and inspiring. 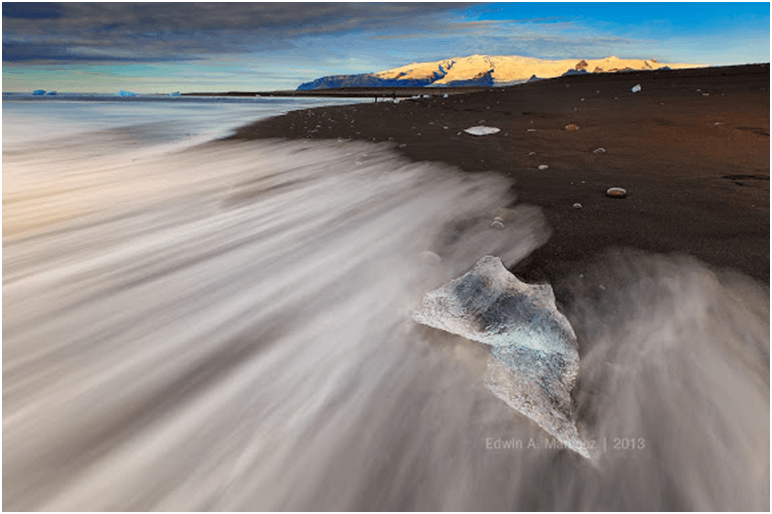 About a kilometer or so away from the lagoon is the ocean where the lagoon exits and most of the icebergs exit. The change of tides carries chunks of ice and the waves would carry fragments to the coastline. For this shot, I had to make sure I had the proper shutter speed to capture the wave patterns having shutter speeds of 1/4 to 2 seconds would be ideal. I used a Singh-Ray 3-stop soft-edge Galen Rowell Graduated ND Filter to get a properly exposed sky. You have to be careful since the sand is like loose gravel and the lagoon is shaped like a funnel —  the waves could drag you to deeper waters. This shot was about 6 feet away from the shore and I tried isolating these patterns since the main foreground resembles a crocodile or dinosaur head. I made a few shots until the wind died down, then I went on to do some longer exposures to make the water glass like.

In visual design it is important that you simplify your composition, remove the elements that are not needed and use visual guides to direct the your viewers from point to point. This photo is one of my favorites from my trip, simplified using symmetry and diagonal lines to direct visual path. Light is the main character here and I wanted to showcase it, the location is a plus bringing more mood to the photo. I used a 3-stop soft-step ND Grad to really balance the exposure and provide the perfect symmetry in both look and exposure.