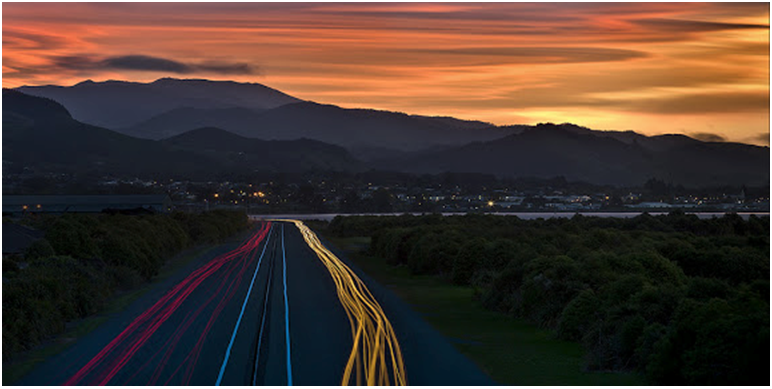 I began reflecting on the images I’ve created this past year, and I have made an interesting observation. There was one filter that was pivotal in the creation of some of my favourite images — images that I would have really struggled to create any other way. And that was my Singh-Ray Vari-ND.

Some of the techniques I’ve been able to use with this filter have been rather interesting — and I like to share them with other photographers whenever I can.

First up is an image called Tired and Hungry, One by One the Birds Returned to Roost. It’s a composite of the light patterns generated by three aircraft returning home to our local airport over about a 1-hour period. One was a smaller plane that stopped short on the runway and taxied off. A second plane taxied close to where my camera was positioned before turning off their landing lights. Then the third bird ‘kindly’ taxied right past me with all its lights still on before moving on via a taxiway to park outside the terminal — thus generating the red dashes from the flashing red tail light.

Photographically, this scene presents a bit of a challenge as the aircraft lights require a different exposure depending on where and how close they are to the camera. On massive waterfall their initial approach they are several kilometres away, but towards the end of the long exposure they’re passing less than 100 metres away and are thus a LOT brighter — which requires far more attenuation. Using my Singh-Ray Vari-ND with a bit of practice, a bit of experimenting, and a bit of luck thrown in for good measure, I was able to carefully increase the attenuation DURING THE EXPOSURE as the aircraft approached. I can’t think of an other way I could have achieved the right effect.

The second image is Enlightening Journeys. Here again the Vari-ND saved the day. Shooting these kinds of scenes requires managing a number of variables. We need to choose an exposure that properly exposes the background, and — at the same time — allows sufficient time for the right number of vehicles to pass by. By using the Vari-ND, I was able to get a good exposure over a 2-minute period @ F22 @ ISO 50.

The last image is Golden Sunset, for which my camera was positioned on a rather unstable swing bridge. but I was able to program a 2-minute delay to let the bridge stabilise after I’d walked off it. The delay was followed by a 5-minute exposure.

Many people tell me that they’d love to be able to create shots like this. But to be honest about it, any photographer with a good tripod and the Vari-ND should find it as easy as catching fish in a barrel.

Find more of Colin’s images by visiting his online gallery. Or stop by his Facebook page where he welcomes your questions or comments.