One reason I’ve survived for over 35 years in the competitive world of freelance photography is my ability to read the writing on the wall. It’s just an awareness to cues about impending change that are given by the marketplace, cues that many will ignore. 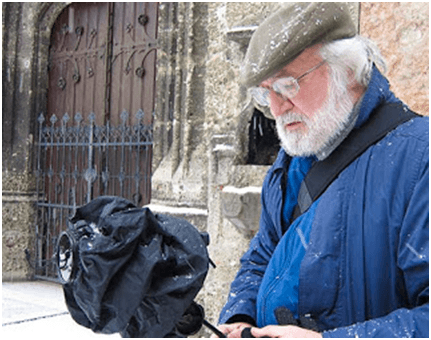 For example, I used to do a lot of photography for corporate annual reports. Before the internet, a publicly-owned company presented its face to the investing community with a glossy annual magazine-like publication that stated its mission, often supported by long, beautiful photo essays shot in facilities and locations all over the world, along with the year’s earnings and dividend figures.

It was interesting, highly lucrative, and very competitive work. But in the late ’80s, the Xerox corporation said they were going for austerity and just started publishing their numbers on pulp paper, without the glossy pictures, so they could save money. I figured if a leader like Xerox was going this route, it wouldn’t be long before others did. I began to look to other markets, like travel, for work.

And sure enough, most of corporate America followed suit, and within a few years the bottom fell out of corporate annual report photography industry, and the advent of the internet put the coup de grace to that mode of corporate communication.

Luckily, by that time, I was already well into a travel/stock business model.

So it was with great interest that I was told the following information a few years ago, while I was in the office of a picture editor at National Geographic Traveler magazine. At the time, he was looking at an online portfolio of spectacular landscapes from a photographer seeking work.

‘You know,’ he said, ‘I’ve got hundreds, maybe thousands of shooters who can do landscapes. But there are still only a few dozen who can also shoot people and know how to shoot a story. But the truth is, I have fewer and fewer stories to give away to you guys every year.’

Graffiti alert! The writing on the wall was speaking loudly and clearly.

It was just about this same time that camera manufacturers started endowing their SLRs with HD video shooting capabilities, opening up storytelling possibilities for markets that simply didn’t exist when I got into the business.

However, I was pushing 60, and did I really want to go through yet another metamorphosis at this stage in my career, pushing myself to learn new media and techniques at a time when I should be looking for a retirement beach house?

Hell yeah!!! I still had a lot of places left to go and stories left to tell, and when I realized the power and potential of this new medium, and how it played to my strong suit of photographing people and telling stories, well, the beach house would just have to wait.

And so I stopped writing a blog and instead started reading blogs, and everything else I could about the art of shooting the short video documentary.

I took a couple of workshops, I scoured Vimeo for the best of the short form documentary, I shot self assigned stories on everything from a famous woodworker to a steam locomotive restoration. I made travel documentaries for clients. And I made (and continue to make) a lot of dumb, rookie mistakes.

In fact, I was passable enough to start landing the occasional paying gig, and every quarter, my video assignments are creeping up on my still jobs, and I expect they will surpass still shooting assignments in the very near future.

Back to the Future
What I learned would fill a book and what I have left to learn would fill a university library full of books. Fortunately, though, a whole lot of the fieldcraft, lighting, and compositional skills I picked up in 40 years as a still shooter applies to video.

One of the areas in which video is almost a throwback to my color slide shooting days is in the exposure arena. Progressive video capture is essentially a stream of highly compressed jpegs, with very little dynamic range and no room for exposure error. Just like color transparencies, or jpegs.

Sure you can adjust exposure in your editing program, but most HDSLR footage has a very low bitrate, and the footage will fall apart quickly if you fool with it too much (in stills, we were concerned with bit depth, in video it’s bitrate. Most of our DSLR video is in the 12-27 megabits per second range. Most broadcast outlets, like the BBC, require a minimum of 50 mbps so that they can work on things in post).

So exposure is finicky, what’s the big deal? Well, here’s another little rub in video exposure (and cue the deep voiced movie trailer narrator guy): imagine a world where there is only one shutter speed!

Yes, it’s true. Over the years it’s been determined that the most natural looking motion in films occurs when your shutter speed is twice your frame rate. Shoot much slower and motion drags and blurs, shoot much faster and it takes on an unnatural staccato look.

You can see the problems right away. The biggest headache is shooting outdoors. Even at low ISO, on a sunny day at 1/50th of a second, you may run out of small apertures and still be overexposed. And suppose you want to shoot a nice narrow DOF shot outdoors wide open at f/ 2.8, f/2, or f/1.4 for that creamy bokeh?

Well, you’re screwed. Unless of course, you’ve got a Singh-Ray Vari-ND filter.

Yes, I owned these as a still shooter, but truthfully, I used them very infrequently, only when I wanted to blur water in a landscape scene. But now, shooting video, there’s one on my lens every time I shoot outdoors.

They’ve become indispensable. The market is flooded with cheap imitations, but if I want neutral color rendition, and an image that doesn’t fall apart when I’m using a longer lens, I only trust the Vari-NDs.

Well, that’s not entirely true. I also trust my set of Singh-Ray hard-edge Graduated ND filters. And I use them a ton more than I did as a still guy, too. Although a lot of cinematographers like to work mostly with normal to longer lenses, I still love the sweeping field of view that a wide angle provides.

When you’re outside and that view includes the sky, it is almost certain to be brighter than the land in the foreground. Remember, there is no latitude in video exposure, and you can’t use a pull down grad ND in your software to darken down a sky in video as you might with shooting stills in RAW.

So these two Singh-Ray products are helping me on a daily basis in my development as a video storyteller. Truth is, I’ll probably never live long enough to become as good a video documentarian as I was a still photographer, but I am enjoying the journey.

And it’s bringing in work, even though I thought I wanted to slow down. So thanks to this new passion for video and the Singh Ray filters, it looks like the beach house is going to have to wait just a few years longer!

Bob’s website features many dramatic images from around the globe as well as a list of upcoming workshops and trips — including a three-week around-the-world trip via private jet with National Geographic Expeditions. Be sure to keep an eye on him — he may already be on to the NEXT next big thing.