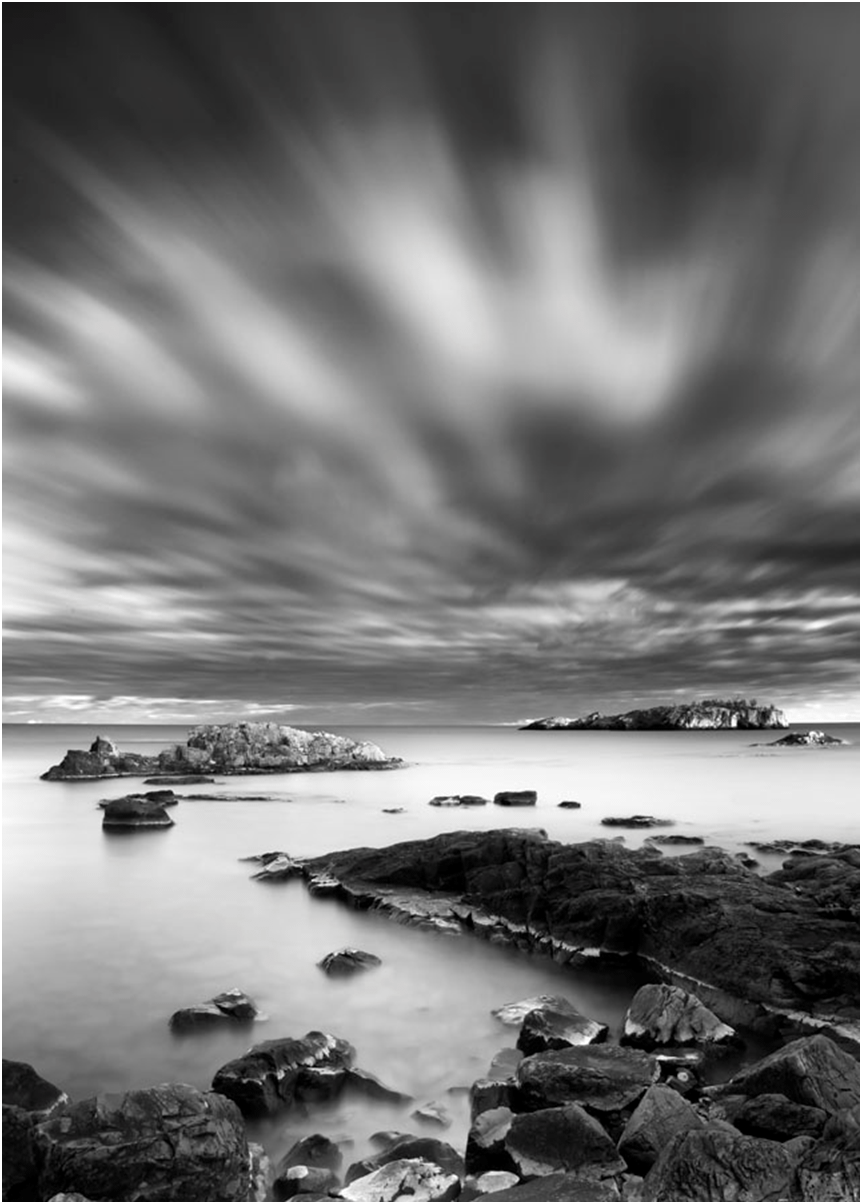 I thought I would offer a basic case study explanation of how this image of Silver Bay was created from the pre-visualization stage to the final post production steps. My basic motivation to create this image was to test an idea that’s reflected in many landscape photographers’ work.

I’m referring to the idea that the photographer can control where the eye of a viewer first enters the image and the path that the eye follows while looking at the image. The goal is to hold the viewer’s attention as long as possible. You might say that we’re taking control of the viewer’s brain. Here’s the theory: The human eye is drawn through various parts of an image in sequence; going first to the areas of greatest brightness, then through areas of high contrast (tonal or color), then on to warm colors (these come forward) and then cool colors (these recede), and finally to the darkest parts of an image. Furthermore, lines can control your mind’s movement through an image, so composition is obviously a factor as well. All this is a subtle form of ‘brain control.’ And trust me, resistance is futile. Let me walk you through some ideas of my approach to good digital black and white photography.

1. Seeing in Black and White

Do you see in black and white as you’re photographing in the field?’ I frequently get this question and my answer is yes. Those new to photography or those who don’t shoot black and white may have a hard time understanding this, so I’ll elaborate a little.

Black and white photography IS color photography. Tonal relationships in black and white arise from two sources: Tonal relationships in the scene and color relationships in the scene. Often, a scene may have some necessary minimum tonal relationships, like this image, but be very thin on color relationships. Why? The blue sky was reflecting in the water, making it blue –- water and sky are my two biggest subjects and they are in the same color space. The rocks had some useful warm tones due to the late afternoon sun slipping through on them, but I wanted more. So, first I separated the sky and water using a Singh-Ray Gold-N-Blue polarizer, then added strong color back to the scene where I wanted it — in the water. The following raw-converted file, used in final production, shows warm tones and cool tones in the sky, as well as warm tones in the water. I can get good tonal separation in the sky without introducing a lot of noise in the blue channel. This is critical to understanding the approach. The blue channel has a lot of noise when converted to monochrome. The Gold-N-Blue allows me to shift the color pallet in favor of less noise. 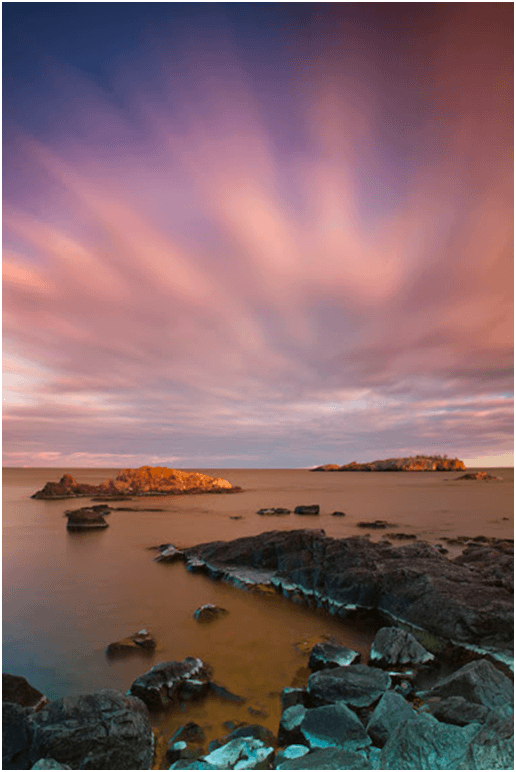 It was around 5:30 PM when this image was taken. I noticed the cloud movement and decided I wanted to slow things down to blur the relatively uninteresting cloud formations and see if I could put them more in favor with the composition. To do this I stacked a 3-stop and a 4-stop Singh-Ray 4×6 ND Grad in front of the Gold-N-Blue polarizer and after some experimentation I found that an exposure of about 1 minute was good for the cloud movement. I liked how the movement brought my eye into the island furthest from the camera. I hand held the grads to minimize the vignette effect created by stacking, but again that is personal preference.

I’ve pre-visualized the scene as black and white because it lacked any strong color relationships. I used my Gold-N-Blue Polarizer to add back some useful color relationships and used more filtering to slow the exposure enough to create blurred motion effects in the sky and water. These effects are intended to enhance the overall composition and soften the water. Essentially, I’ve created an image in the field heavily influenced by what I intend to develop in my post-production technique for black and white images. So, let’s move on to post production strategy.

The first step in the digital darkroom is to set up the relationships I want by stacking the two color versions into layers and using a layer mask to establish a difference between the sky and the water. This part came through experimentation. I was losing detail in the cloud movement, so I went back to the color corrected version for the sky and that met my needs for tonal contrast and preservation of detail. 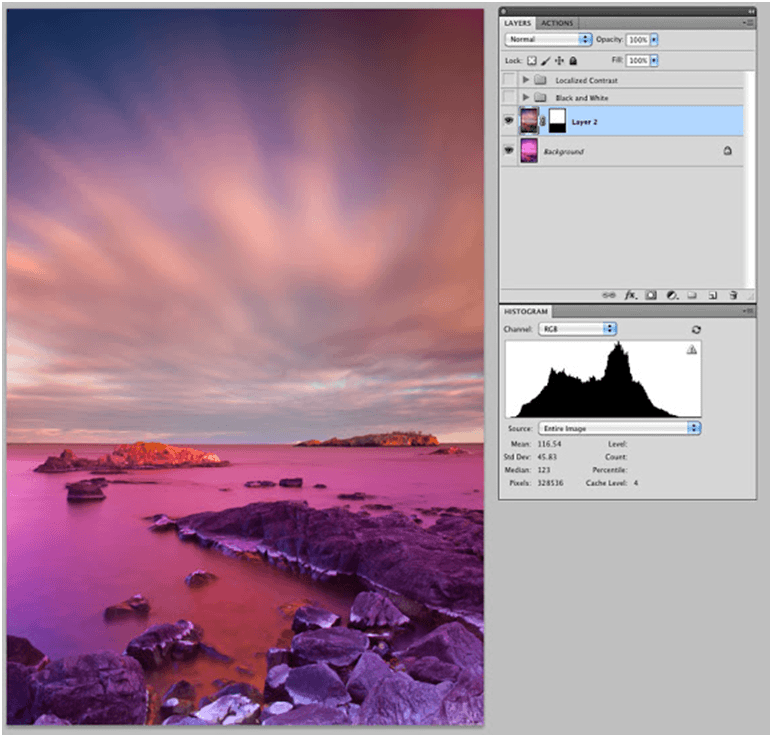 I’ll develop different, localized parts of an image differently in black and white using Black and White adjustment layers and careful, detailed masking. For me, this is essential work and is absolutely akin to the work done by the print masters in the darkroom. If you are unfamiliar with these techniques, then I highly recommend the “5 Essential Adjustment Layers Tutorials” produced by super Photoshop teacher, Mark Johnson.

For the sky I utilize 64 points of brightness on the magenta channel, but utilize 104 points on the water and rocks, hence the need for layers and masks. Likewise, I can manage the brightness relationships in other color channels, for different parts of the scene. This allows me significant control over tonality, which gives me control over where you move your eye through the image. Yes, essentially I’ve taken control of your brain. 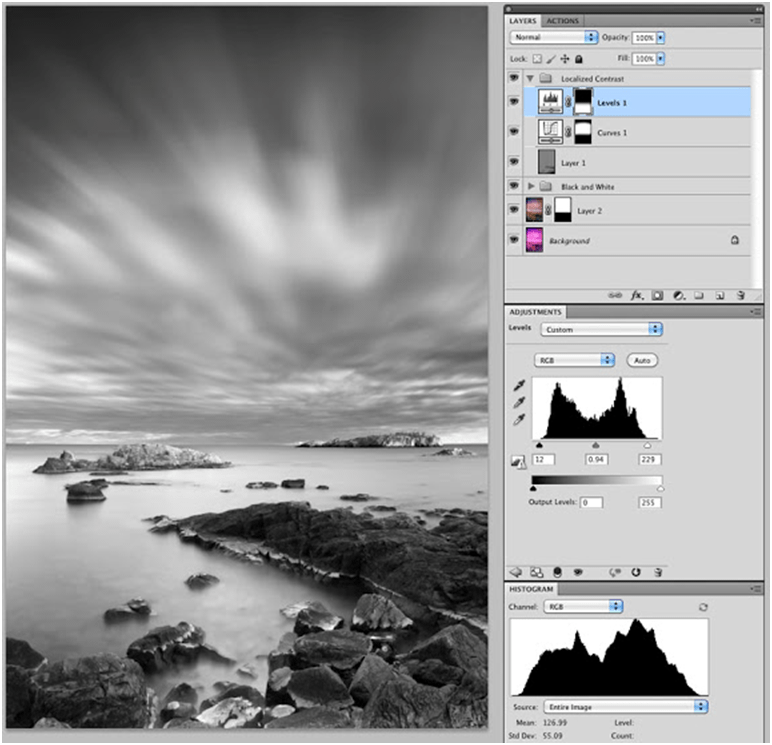 The Final Step To Brain Control

Well, it’s not the final step. I’m not giving you that today, but we’re close. Seldom does a digital image have the contrast I like after completing my work with Black and White adjustment layers. To really finish off the mind control, I like to enhance localized contrast as well as establish black and white points in a monochrome image. This is really a necessary step. It prevents the entire image from falling into the mud hole of tonality. How much of your image should be black? Personal preference. How much should be white? Personal preference. Nonetheless, there should always be some black and some white in your image. Your histogram will tell you if you have a black and white point. In this last step I performed some dodging on a neutral density gray fill layer (set to soft light blending mode), a Curves Adjustment Layer to fix some specific mid-tone areas in the sky and Levels Adjustment Layer to establish a desired level of tonality in the middle and foreground. 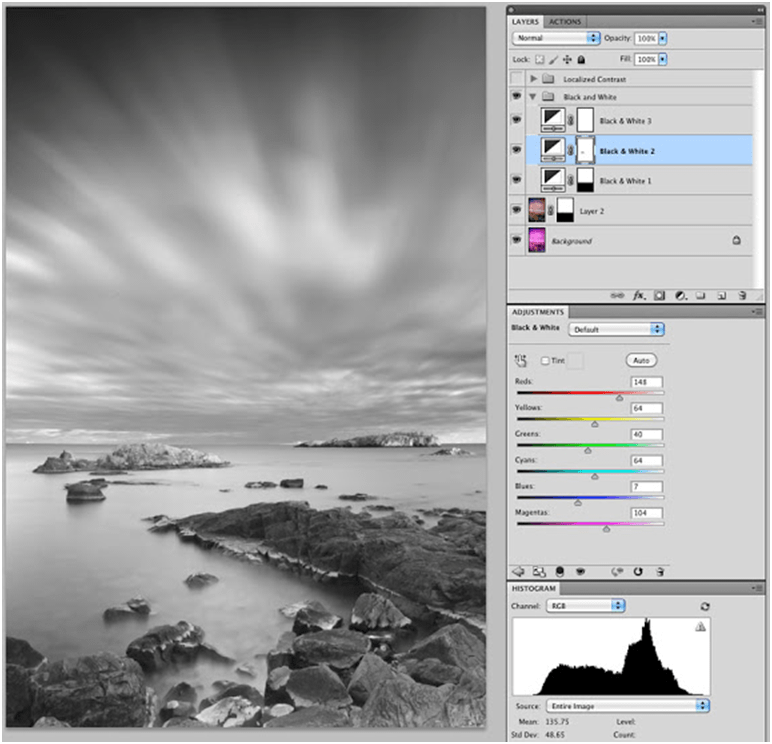 Perhaps the most important lesson here is this: This case history represents my approach, and you’ll soon discover your own personal approach to these issues. I would hope, however, that you might take a few nuggets from this case study to weave into your own workflow.