I’ve just visited two of my most favorite National Parks now that they are closer than ever, When I first moved to the deserts of Arizona ten years ago, I considered Page AZ but did not move there. Instead I went a couple of hundred miles south to the small town of Cottonwood, about 100 miles north of Phoenix. For more than a decade, Phoenix served as a terrific base for conducting my various photo workshops throughout the western states. I enjoyed great access to the south rim of The Grand Canyon with the Navajo nation and all of Utah’s parks close by.

Now that I have moved to Las Vegas, Nevada, I find myself halfway between my two most favorite national parks. Six hours to the north is the Grand Canyon. Yosemite is just six hours to the west. That means both are virtually right in my backyard. I first visited the North Rim, then I went west across the deserts of Nevada to Yosemite. Fall was in the air, but the color had not yet changed. The Canyon was mostly quiet after the tourist season and the weather was mild. In Yosemite we closed two of the High Sierra camps. Both visits were great opportunities to celebrate my relocation!

Photographing the Grand Canyon felt like visiting an old friend. It was a time to relax — knowing that whatever happens next will be enjoyable on several levels. I find tranquility in setting up an image where I’ve previously made some fine images. I’m seldom disappointed photographically and even when I walk away empty handed, I revel in the experience of just being there! The image above was taken from the north rim of the canyon which has an elevation that’s over a thousand feet higher than the south rim and the rock formations are so much closer. Nowhere are both rims more in play than here at Cape Royal. From this point above the dramatic setting, it is easy to set up an image that has converging lines that parallel the rim to the south. This gives a flow to the composition that is simply majestic to me! In the past I’ve been fortunate enough to capture two images from this location that I have framed to hang in my home. Maybe this one will be number three? I used a Singh-Ray Color Intensifier along with a 4-stop hard-step ND Grad.

This sunrise image from the north rim was an unexpected gift! I was out looking for first light on Mt. Hayden, but the cloud cover that morning prevented it. Over my shoulder I had been watching the changing colors in the sky for more than half an hour when suddenly the rising sun lifted into the cloud formation thus giving even light to the canyon below. Setting up my composition as fast as possible to show the ledges leading into the canyon, I was only able to capture two frames before this image was gone. The use of a 3-stop Reverse ND was the key to holding the exposure of the light rays below the clouds. I also used a ColorCombo and a 4-stop hard-step ND Grad. 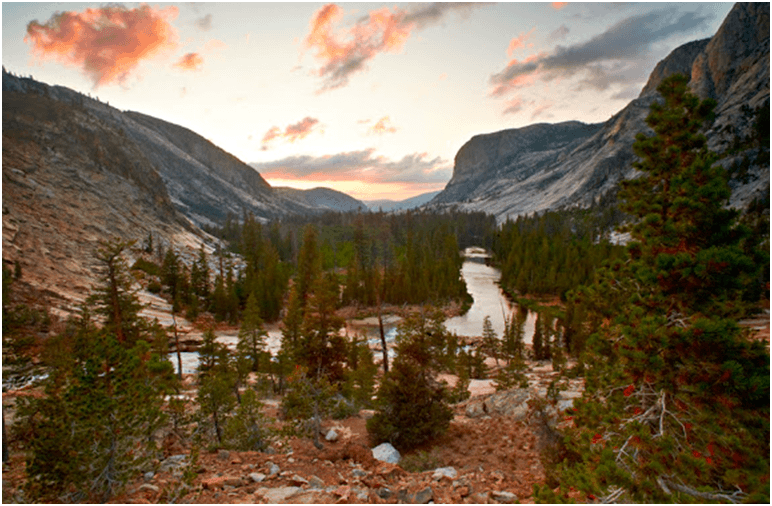 On my trip to Yosemite, I was able to make the last few days of the season at two of my favorite Sierra high camps. Both the Glen Aulin and the May Lake high camps offer different and unique photo opportunities. This view of Glen Aulen never disappoints me. It’s located at the mouth of the Grand Canyon of the Tuolumne River. This late in the season, the orientation of the light was much different and offered beautiful sidelight on the canyon rim. The magic light that appears in this image turned the clouds a crimson wonder. Using a ColorCombo and a 4-stop soft-step ND Grad, my exposure was for 10 seconds at f/16. With the future of the Glen Aulin high camp in jeopardy due to the drain field runoff into the river, each visit here becomes even more special. I happily add this image to my portfolio with hopes of capturing more in the future. 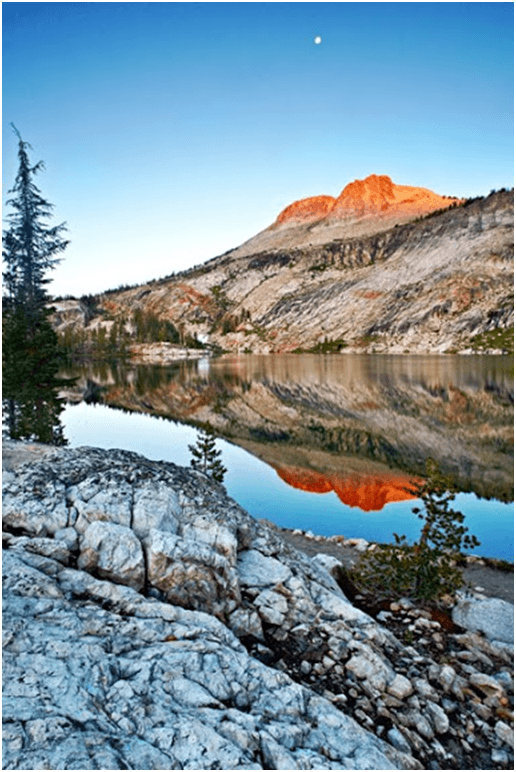 I’ve shot this scene at May Lake many times, but this was only the second opportunity I’ve had to photograph the scene with Mt. Hoffman reflected so clearly in the perfectly still water! The reflection was a rare treat but it presented a couple of problems. First and most important was the fact that I have, for years, considered my previous reflected image from this spot to be about as good as I know how to make — both compositionally and technically. But in my heart of hearts I always hope this is not true. But what to do now? I was also limited in what tools I had with me. Backpacking only allows for limited photo gear. If I wanted to take advantage of the three-quarter moon setting, I needed to widen the composition a lot. Including the reflection would help immensely here. The long 20-second shutter setting would render the moon oblong. It’s moving! I had two lenses in my pack. One of them was my Canon 20mm 2.8. Perfect! I used a 4-stop hard-step ND Grad to balance the exposure.