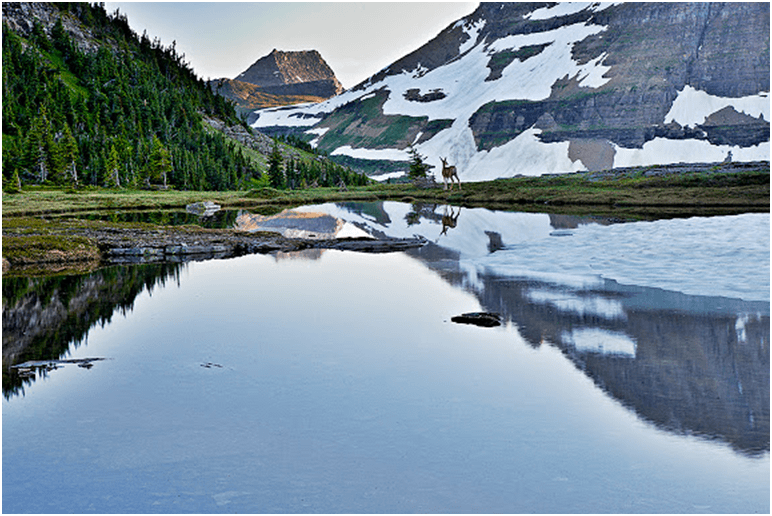 Sometimes I wonder whether success in any creative art is more dependent on the singer or the song? That is to say, is it really the photographer or the place? Over the years, I’ve come to realize excellent outdoor images can be made almost anywhere at any time. Nevertheless, that rationalization fades from memory when I find myself surrounded by the awesome grandeur of our nation’s National Parks, and one in particular.

Although it’s in a remote location, Glacier National Park on the Montana Canadian border is rich with photo opportunities for those who visit frequently. Nowhere — except for Alaska — are there primitive wilderness settings as easily accessible as here! By 2020, however, Glacier National Park will have no glaciers! The original estimate for their demise was 2030, but that date has since been revised and a current study may yet again move this date. What this means for those of us doing photography is unclear. Those visitors who have hiked to Jackson, Grinnell or Sperry glaciers in the park have witnessed over the years their decline and increasingly limited accessibility. It’s just tougher to get close to what’s left! This will certainly have an effect on the surrounding plant and animal life. It’s well worth noting that within its 1 million acres, this park still retains almost all its original endemic plant and animal species. It’s doubtful that a name change for the park will take place after the last of the glaciers have gone, however. Glacier National Park it will always be, with or without them! It’s a place where the hand of man has met the environment head on. Its drastically short summer season permits a short window into this hostile habitat with long days and very short nights. Especially so if one wants to sing its song with tripod and camera.

Yes, I would prefer that nature’s wildlife step into more of my frames! I’m not a wildlife photographer at all. That is a skill set unto itself. Here the final element presented one more challenge. As I was considering the possibilities for this landscape, I noticed the deer making its way into the scene. I quickly switched from my Singh-Ray LB ColorCombo to an LB Color Intensifier to gain a one-stop advantage in shutter speed. While I lost the advantage of a polarizer, I realized I’d need the extra speed if the deer did indeed enter the frame. I also chose my 3-stop soft-step Graduated ND filter to balance the distant sky. The deer would not cooperate by turning toward me, and I considered not opening the shutter at all. I’ve learned that shooting creatures from behind is not the angle of choice. Then I decided the deer was not my main focal point in this composition. I then waited for it to stop once again and raise its head. 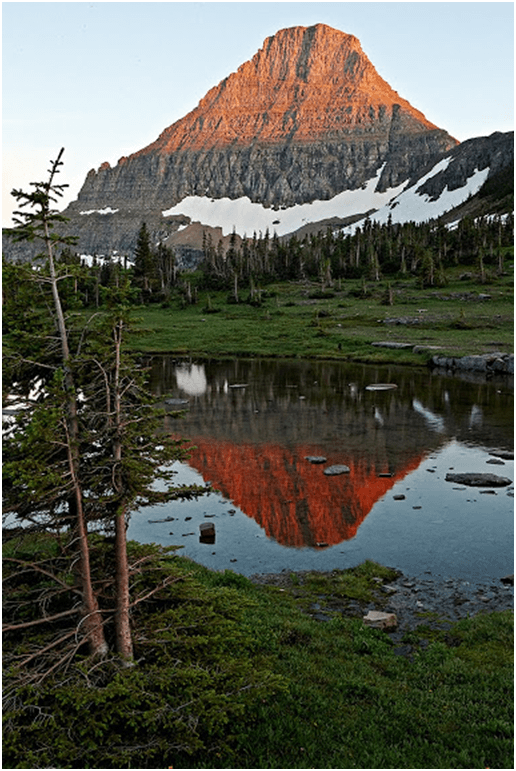 This image was made just after the one above. It’s a good example of my belief that nature never does anything just once. Repeated patterns, textures and shapes are usually found again in the surrounding area and this scene proved that point. Arriving with a reflection pattern fresh in my mind, I was immediately drawn to yet another. Here the reflection was the focal point and I ‘shortened up’ the composition with a longer lens. But this left less feeling of scale. The tree was the last element I needed for this shot and the exposure was set for the snow field at the base of the butte. My Singh-Ray LB ColorCombo was carefully set so that it did not negate the reflection or over-saturate the sky. A 4-stop soft-step ND Grad helped bring the reflection value closer to the exposure for the butte. 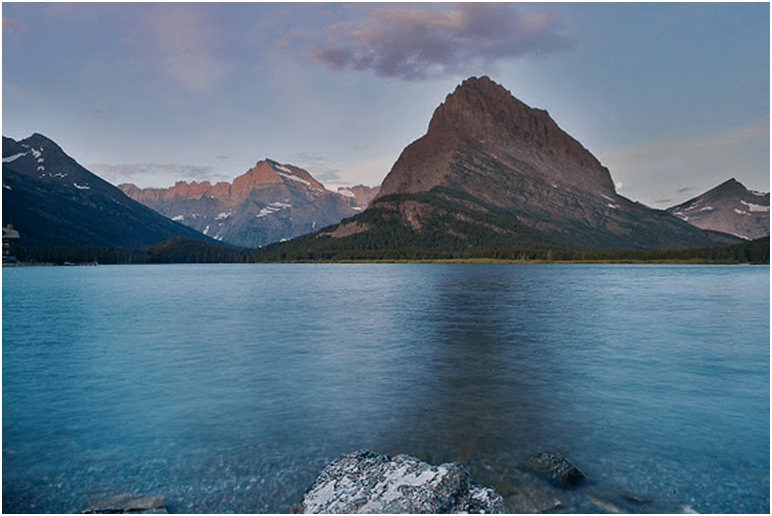 The eastern part of Glacier National Park is the windy side. It’s also the quiet side in terms of people. The lakes are the main attractions. Swiftcurrent Lake is one of the park’s jewels! In all the years I’ve been photographing these lakes, I’ve only seen a smooth, glass-like surface once! And it was obvious as we stood in the dark an hour before sunrise that this was not going to be the second time. In order to ‘create’ a smoother surface, I used my Vari-N-Trio. With the benefit of the that filter’s built-in warming polarizer and color intensifier all that was needed was to first set a shutter speed and aperture combination that would give a long exposure to blur the water and achieve enough depth of field to keep the foreground rock in sharp focus as well. The last step was to use a 2-stop soft-step ND Grad to hold back the exposure of the moon near the horizon. The exposure was 30 seconds at f/16 at 100 ISO. 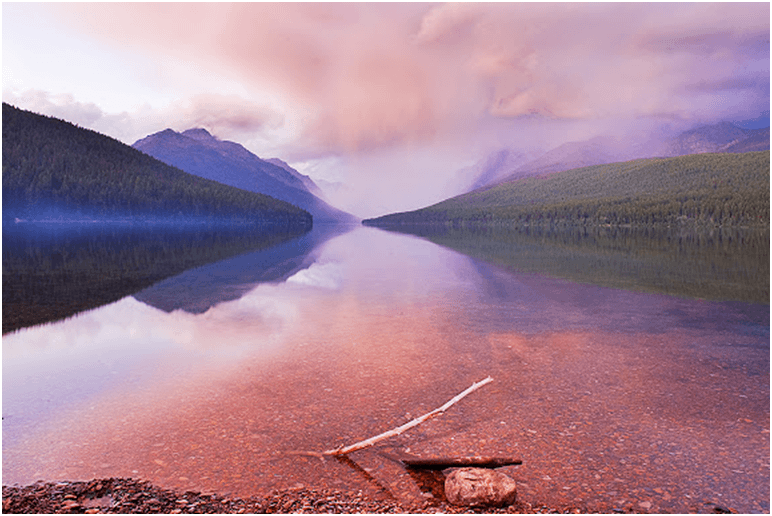 Low light and the drama of a passing storm is what we found as the sun was setting over the peaks. A thunderstorm had developed as our day came to an end, and with it came the challenge of composing and exposing this scene. The focal point is way out at the far horizon. Without the ability to change my camera position at the base of the lake, the only way to change my composition was by my choice of a 24mm tilt-shift lens. The reflected clouds were helpful but it was the branch and rock that seemed to anchor a foreground that made the decision for me. The LB ColorCombo was set to take advantage of its built-in polarizing feature to show the lake bottom merging with the cloud reflection. I also used a 3-stop soft-step ND Grad to balance the sky with the foreground. The trick was in the exposure of the foreground. I considered using fill flash but knew the bounce off the water would produce glare. My second thought was the reflector in my vest pocket but there just was not enough light to reflect. In the end I simply used my Petzel head lamps to “paint” the foreground during the 3 second exposure.

Watching the light glow and glaciers recede in this remote wilderness is both breathtaking and heartbreaking, sometimes at the same moment. Although this year’s summer season was no more than a few weeks, every moment spent here is a moment to be cherished. Especially in a viewfinder!