Not since my 45 RPM record collection dominated my life during the 50’s and 60’s have I been as interested in gathering information and experiencing a subject in as much detail as I now give to our National Parks system. The parks and the landscapes they present were the reason I returned to school in the 80’s to learn the art of photography, but I had no idea I would spend so much time in them. 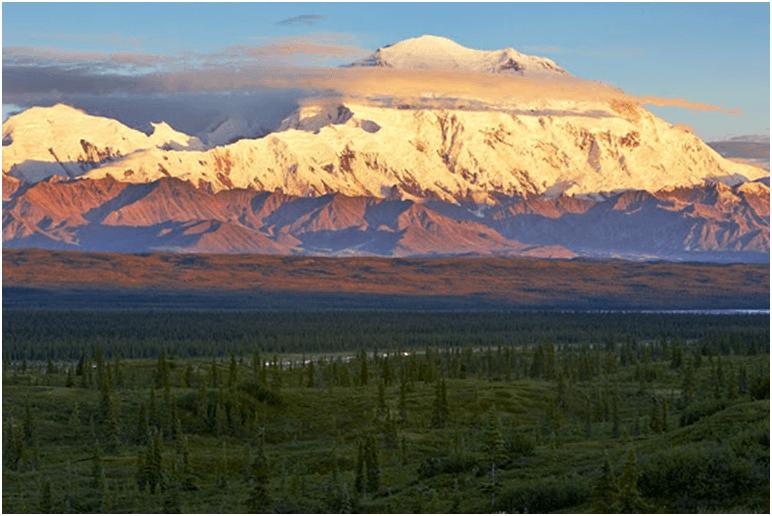 The green of the tundra is dark and light absorbing. The non-reflective effect would have been intensified by a polarizer with heightened contrast. I did consider using my warming polarizer but achieved better results by using the combination of the Singh-Ray Color Intensifier and 4-stop soft-step ND Grad. Denali Mountain is so grand in scope that scale is most difficult to show. This image was taken only 28 miles from the mountain’s base. The McKinley River is visible in the foreground.

A decade ago I was in Alaska. Yes, it was on my ‘someday’ list of places that I really never considered possible. I did some incredible things on that brief visit. I saw the bears salmon fishing in the falls at Brooks Camp, but in the few days we allotted for travel to Denali National Park the weather was our enemy and we never got there, let alone saw the mountain! Since then I’ve always prefaced the thought of a return visit with the sentence ‘I’d like to spend an entire summer there next time!’

The summer of 2013 became ‘Our Alaskan Adventure.’ For over a month we were on the road. Starting out from Las Vegas, NV, to Glacier National Park. We covered Banff and Jasper, two beautiful units of the Parks Canada system. Across beautiful British Columbia and the Yukon we did sightseeing in Dawson Creek and Whitehorse. We rode the world-famous White Pass and Yukon railroad to Skagway AK and braved the highways north that become worse the further we went. If you think the Mississippi is a big river you need to experience the Yukon River! In the end we covered over 8,500 miles of road even though we took the Alaska state ferry system from Haines, AK, though the inside passage all the way back to Washington state!

There were highlights each day and places of incredible beauty in every location. However the centerpiece of the trip from inception to completion was Denali, the area as a whole, the mountain in particular and the park. Founded in 1916, Denali Park was actually the first park added to the system after the National Park Service was instituted the year before. Until 1972 when the George Parks Highway was built between Anchorage and Fairbanks, the Alaska Highway known originally as the ALCAN, was the route to Denali. You left the Alaskan Highway at the Denali junction and traversed a gravel road across the tundra for over 120 miles to reach the park, thus heightening the wilderness experience considerably. Today this route is still passable in summer and I highly recommend it.

Denali was established as a wildlife preserve but soon suffered the consequences of its vast and breathtaking vistas. Since its founding in 1915, the population of Alaska has increased 5 fold, but it’s not the locals that have invaded nearly as much as the tourists. A 90-mile park road was built almost immediately and in the 30’s the fighting started over what form the park would take in its approach to visitors. The first 16 miles were paved before a halt was granted and today this stretch is open to private vehicles with the rest being left only to the park’s system of school-type buses. 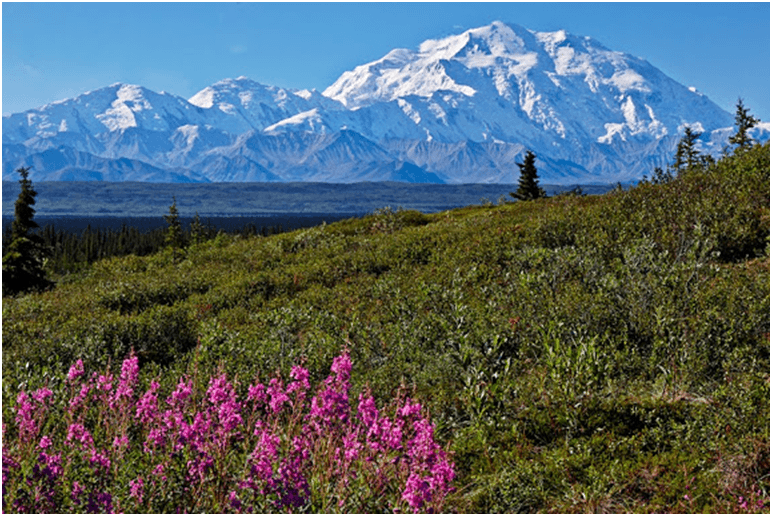 A plant called fireweed is almost everywhere in the Alaskan interior. It’s difficult not to let it become a cliché when setting up an image. I found myself all too often looking for it before even considering content elsewhere! In this image along the trail however I used it to show contrast of color at “noon o’clock” which can be as much as 10 hours on a cloudless day. The polarizing effect of the Singh-Ray ColorCombo filter helped just slightly to cut some of the haze brought about by the abnormally high temps. The saturated earth tone colors of both the fireweed and tundra that I knew would be produced with this filter had me reaching for it almost before I dropped the tripod!

For the park visitor there is something called the 30 percent club — based on the fact that 70 percent of those visitors to the park never get to see the actual mountain! At 20,320 ft. this mammoth peak, which is just a part of the Alaska Range, makes its own weather and is usually obscured partly or completely by clouds. With the park entrance being in a canyon setting and far from the mountain itself you must first enter and then drive or shuttle some 9 miles into the park to get your first glimpse. One evening covering the public portion of the park road looking for wildlife, I could have sold tickets to look at the mountain through the viewfinder of my 500 lens. Deceptive as it was, a white dot on a jagged horizon, even folks with high powered binoculars were hard pressed to find the mountain from 70 miles away under quickly changing conditions. The vistas are that grand! 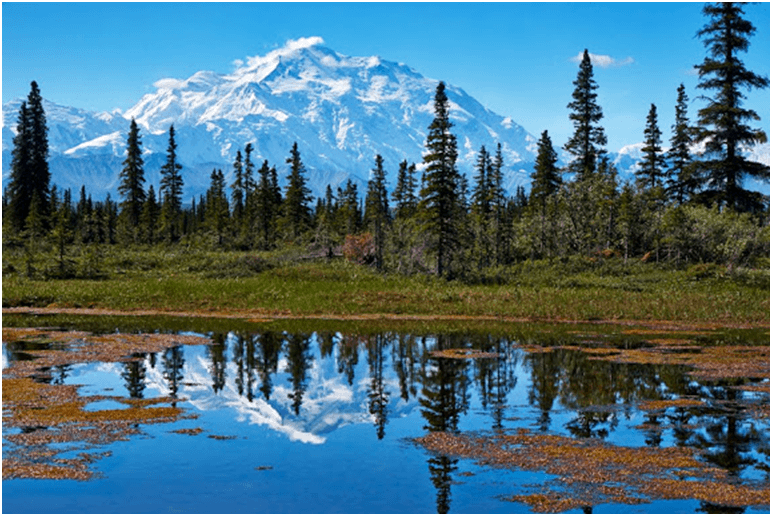 Trees that grow in the permafrost (at least 2 years constantly frozen ground) are smaller and only reach a fraction of the size of those not in permafrost. Thus, it is easy to tell which is which and they not only make a clearing in the open tundra but provide interest in formation. In this image, a polarizer again was out of the question with the constantly solid blue of the cloudless sky. Instead the problem of non-contrast mid-day light was solved by increasing the exposure a full stop and using a 3-stop soft-step ND grad.

Of the 6 days and 5 nights spent in the park, our visibility of Mt. McKinley — or Denali as most now refer to it  —  was more like 95%. In mid-Summer first direct light is about 4 AM and seems to last for hours. In the evenings good light starts about 9:30 PM with sunset around 11:45 PM. Mid-day provides the opportunity for stronger compositions and the clouds seem to come and go quickly, or stay in one shape or another for hours on end! After a few days of this uncommon experience, at least that is what the locals told me, I still found myself unable to look away from the mountain. I did not need to photograph continually, but I never stopped looking for the next opportunity! 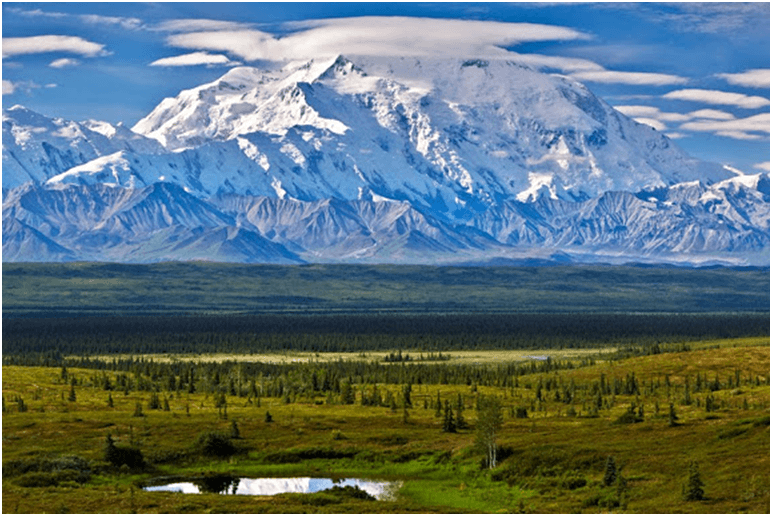 On the way to the reflection pond, while gaining altitude the tundra became more reflective and needed help from my LB Warming Polarizer which in turn cut down on the cold blue sky shadows. Since contrast was needed and the dividing line straight I used a 3-stop hard-step ND grad which provided a little more clarity of the mountain and darkened the foothills.

I have a wicker basket here at home that’s full of official National Park maps. It started a long time ago when I worked ski resorts and began collecting trail maps of mountains I’d skied. The rules for inclusion are the same. A map, and only the official NPS map, may be placed in this -place of honor- if I have personally visited the park. In recent years I have taken to the custom of stamping my NPS Passport at every visitor center and also stamping the park map designating the date and place. Even though there are only 52 parks that carry the designation of National Park, there are now hundreds in my collection. Multiple visits dictate multiple maps! Of the 52 units I’m now only a dozen or so short of my goal to grab them all.

In terms of its layout and feel, Denali National Park itself has everything I’d always imagined. This may be the only park where the vehicle is not king. A preserve of peace and tranquility. The interpretive exhibits honor some of my longtime heroes such as Charles Sheldon, the Kantishna native (the small former mining community at the end of the park road) whose vision it was in the first place for this preserve and later park. It seems that in the case of almost every one of our national parks there has been one person central to its creation. In other places, well placed exhibits pay homage to Adolph Murie, whose study and dedication to wildlife have preserved many species and saved the road from being paved and opened. At Wonder Lake, Ansel Adams and his story of the making of his famous photo of Mt. McKinley, Alaska, 1948, are displayed.

In the heart of the Alaskan wilderness, it all felt like coming home!

Denali National Park is very unique and different. Photography is not easily done there. If you are a professional you can enter the lottery system and if selected, you will be allowed to use a private vehicle on the park roads. Only the first 15 miles of Route.  90 are open to private vehicles. In order to achieve successful photographic results it takes both camping (the only way you can stay in the park) and hiking.