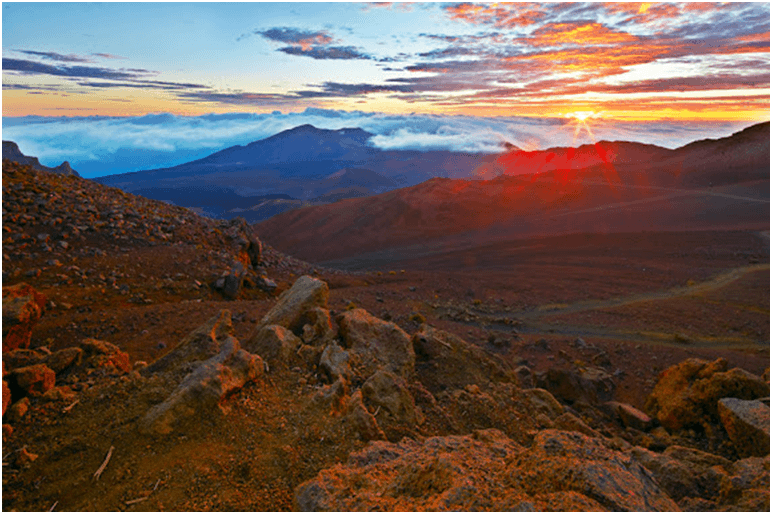 The wonderful thing about life is that we never know! We create this crazy illusion that we control our lives, yet when I think about it, I realize how little is planned and how much is serendipity. In my quest to see and photograph in all the National Parks, I find myself still twenty-one parks short. Out of the fifty-eight locations that carry the N.P. designation, I’ve now visited thirty-seven.

The Hawaiian Islands is about the last place I expected to have any chance to visit. My little rule has been that if I can’t drive there, I don’t need to go there! However it was easy to break that rule when the opportunity presented itself. Since I had never envisioned myself there, I had no preconceived ideas about what it would be like, other than I certainly wanted to see the two National Parks.

Booking a pre-dawn flight to Maui and picking up a rental car, I was atop the crater at Haleakala National Park by 10 am. A long switchback drive up the mountain was punctuated by heavy vehicle traffic coming down the mountain. The crater rim is just above 10,000 feet and of course I started from sea level. I’d often been told that sunrise was exquisite and I planned on photographing one, but I’d missed it this first morning and arrived at an almost empty visitor center parking lot. I was greeted inside by a lone park ranger behind a small desk. ‘Welcome to The House Of The Sun’ was the greeting. ‘That’s what the word Haleakala means,’ he continued. I was quickly off and running. The view of the crater from the window (above) made me want to leap through it! 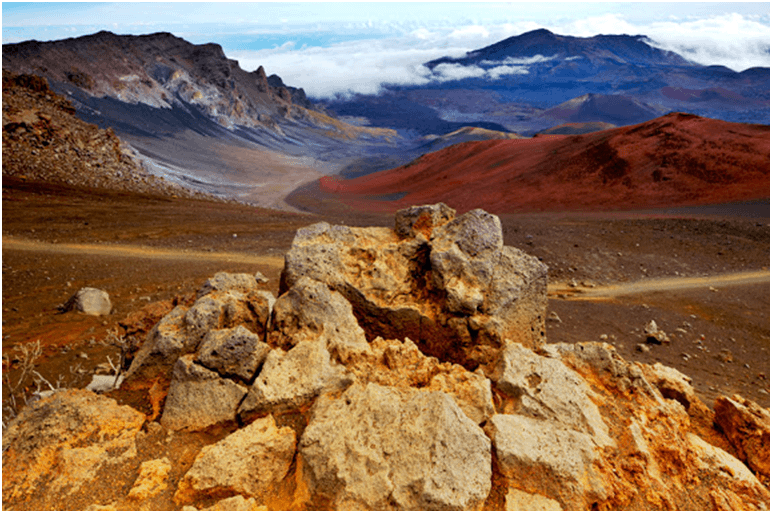 Headlong, I plunged three miles down into the Haleakala crater. The trails were deceptive in the same way the distances, scale and scope were to photograph. As a tourist on foot I was overwhelmed and began to mostly document what I saw. Everywhere I stepped there was evidence of volcanic upheaval. The silence was deafening in effect. I could easily see how explosive this place must have been. Noise and heat. Steam and flame! But today it was cold and sometimes damp. I let the clouds substitute for steam. I was afloat in space and time. The rock foreground gave the feeling of a barrier separating safety from the unknown of the inner crater. The three miles back out was proof that I was hiking an inverted mountain. It took twice as long to get out as it did to go in. As I rested often, I was amazed at how much the scale changed. With the blue sky making cold shadows, I used the LB Warming Polarizer and two-stop soft-step ND Grad to hold detail in the clouds. 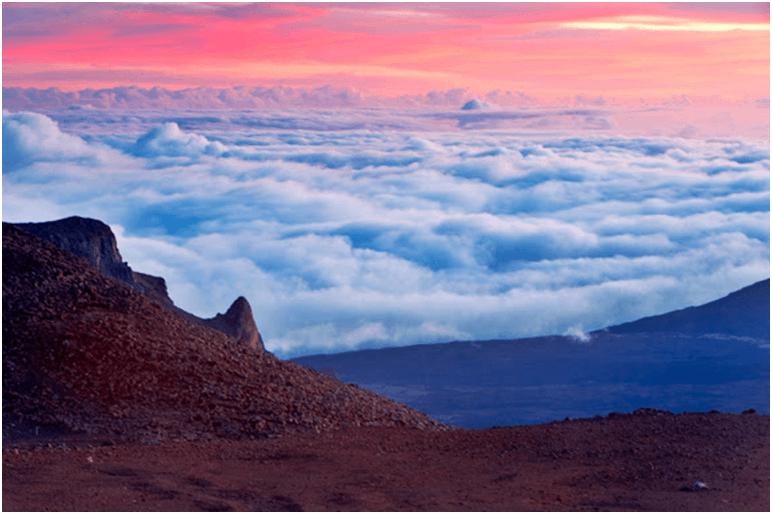 Pre-dawn set-up is simply a circus. A deserted park during the day becomes a Disney-like carnival well before first light. People arrive as early as 4 AM and the park rangers become parking lot attendants stacking cars in deep rows in the dark. People coming from the tropical warmth down below were unprepared for the cool air and wrapped themselves in towels and blankets. They took on the look of pilgrims stumbling to the rim for sunrise. Within moments after the main event that is sunrise, the reverse happens. As soon as enough people return and untangle enough vehicles to move, it starts what looks like a line of ants descending down the mountain. I was fortunate enough to experience two sunrises both at around 30 degrees F. I got the feeling that no two mornings would be the same here. I’d like to spend considerable time finding out if this is correct! Made on different mornings, the lead image (top) was taken with a 4-stop hard step ND Grad and this heart stopping one was made with a ColorCombo and 3-stop soft-step ND Grad. It was like flying without an airplane! 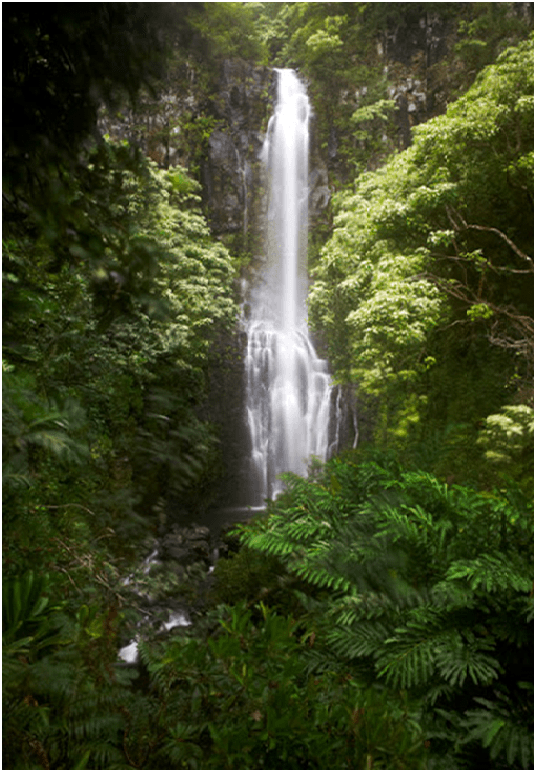 The rain forests were something I was not prepared for. They give direct and immediate meaning to the phrase, ‘you can’t see the forest for the trees!’ The clutter and disarray was at once both beautiful and daunting. Finding detail everywhere made the seemingly easy job of composition almost impossible. The deeper I went into the forests, the more difficult it got. I set this task aside until the end of every shoot in hopes the answer would appear. I thought of Ansel Adams as he described his affinity for Southwestern landscapes that were naked and exposed rather than here where they were camouflaged everywhere. There was simply too much of everything. My answer was to step back! Starting at the base of this waterfall was fun but cluttered. Climbing to a vantage point above proved more productive but it felt sterile in the sense that it looked for all the world like every ad photo in the magazines I saw on the flight coming over.

Photographically, it presented big problems. In the gentle but constant breeze, I realized that all the surrounding foliage was moving and would be impossible to stop. Even if it were possible, it would look like a hand grenade had gone off! My answer was a great new tool from Singh-Ray. The 10-Stop Mor-Slo Neutral Density filter. Quick and easy to use, I took note of the existing shutter speed, placed the filter on the lens and added 10 stops of exposure time to my shutter setting… and fired! The light gathered during the 50-second exposure produced the glow. Note that NOTHING in this image is sharp! 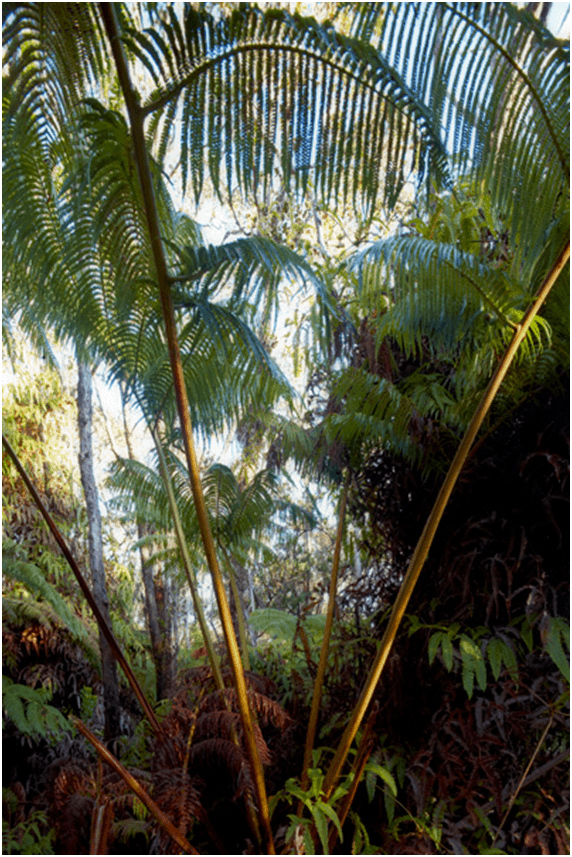 My best solution for the chaos of the rainforests was to go wide and low angle. This afforded the feel of being engulfed and surrounded, as I was in reality. The overhead canopy was even more engaging than the dense growth on the floor but it was very difficult to find lines that didn’t intersect or deep shadow that did not hide important detail.

This dilemma eventually led me to choose my Canon 17mm Tllt/Shift lens and many different exposure combinations. As I always do in this situation, I made two exposures of each shot — one for the shadows and the other for highlights — just in case a composite was necessary. In the end I was successful with a 4-stop soft-step ND Grad. I took care to block both the reflection and reflected light from behind using my filter pouch just behind the filter and above the lens. This is a lesson I’ve learned when using this extremely wide angle lens with my ND Grads. 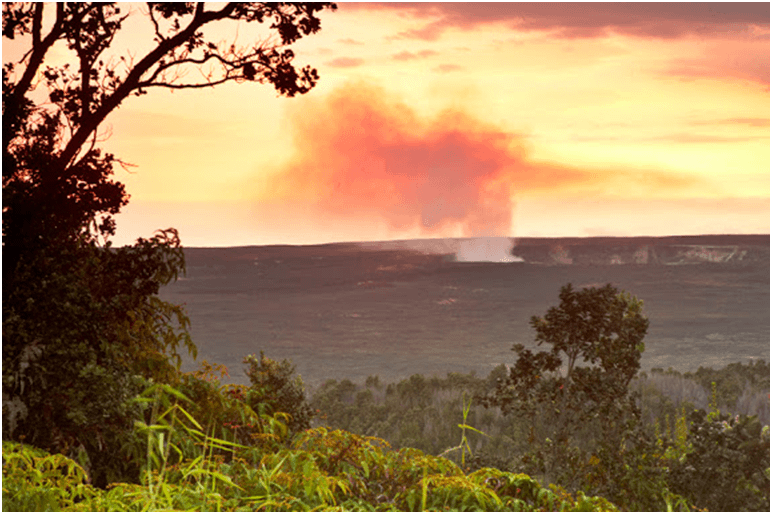 On the ‘Big Island’ of Hawaii, the renowned volcanoes of Kilauea and Mauna Loa are found in Hawaii Volcanoes National Park. This is a small park in comparison and is just off the main highway that circles the island. Unlike most of our national parks that feature driving as the main way to see the highlights, this park has only a small area available to the automobile. Since its eruption of 2008, the Kilauea crater road is only partially open. Instead the many foot trails in the park provide different views and access to the different areas. The thrill of emerging from deep rainforest on the sheer cliff edges of craters and then back again was most inspiring and at the same time almost impossible to photograph! Here at sunset, the phenomena that sees the rainforest getting over 200 inches of rain because of the volcano became the story. To tell it, I found myself behind the old Volcano House Hotel, which was closed for renovation, making the area quiet and deserted. Knowing that Mark Twain (of Tom Sawyer and Huckleberry Finn fame), wrote of this very same location in his novel Roughing It, made me even more aware of the history here. I came very close to just watching this lovely sunset. Photographing it almost interrupted the event. I used my Color Intensifier and 3-stop Reverse ND Grad since the brightest area was just above the horizon. 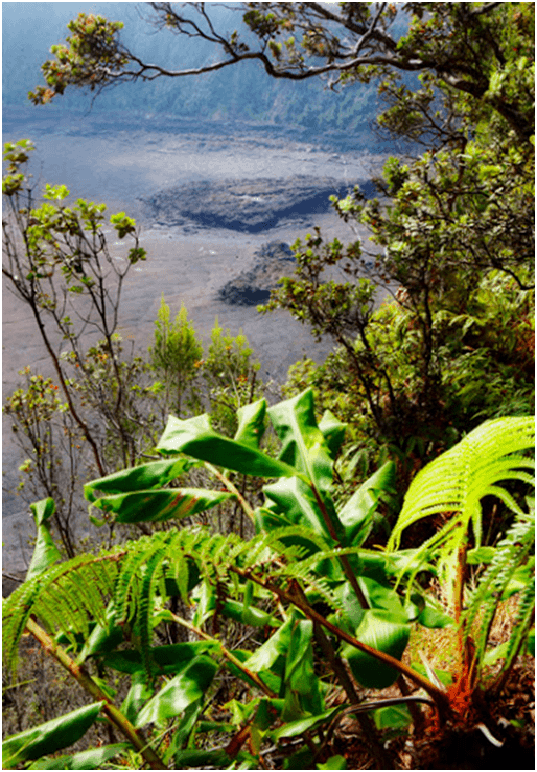 I found myself constantly trying to tell the story of both the rainforest and the active craters. Here at Kilauea lki Crater, you can witness a cooling lava lake with steam vents and the fountain eruption location from 2004 visible from the rainforest on the rim and then travel by foot trail down to the lake itself. Although this area gets high foot traffic, it still seemed as if I were alone most of the time. As in all our great parks, I’m always taken by the expressions of joy and wonder as I pass visitors. Here I was tempted to ask strangers if they could take a picture of me before they could ask the same of me!

This last image called for using my ColorCombo to cut the glare off the foliage and saturate the greens.

Experiencing these two national parks far outweighed the photography. I’ll need much more time and many trips to begin to know what images I should capture, as well as how to capture the best images of these wondrous parks. I’m happy to leave this matter for another time. On this trip, being there was everything. I had to remind myself constantly that I was actually there. In many ways it now seems like some sort of south pacific dream. The warm trade winds with the glow of the setting sun still remain. To the Islands and its people I say a warm Mahalo and Aloha.

You can always get more information about Steve’s photography, travels and upcoming workshops by visiting his website.