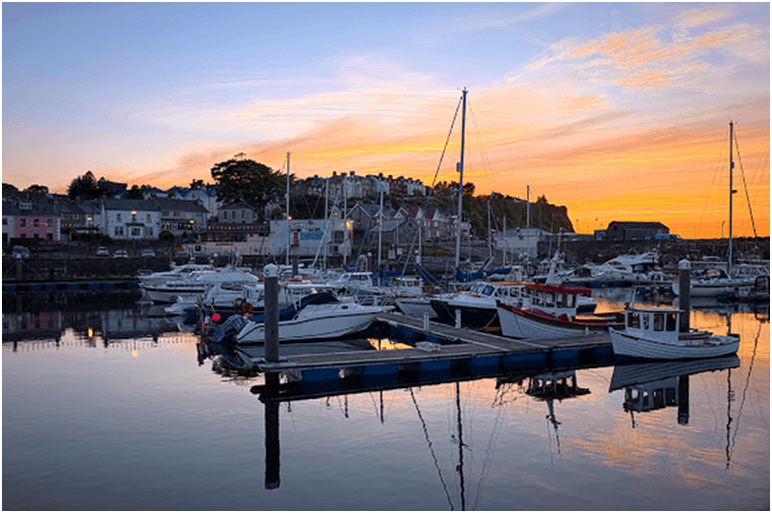 After a couple of days in Dublin we rented a car and drove to Northern Ireland, which is part of the United Kingdom. Our plan was to head straight to the scenic northern coast of the island and then swing back through the Republic of Ireland following its western edge as we made our way back to Dublin and our plane back to the States.

In the early afternoon we arrived in the beautiful little town of Ballycastle which was the ideal starting point to explore County Antrim since most of the historic and scenic areas are within easy driving distance. After checking in at our bed and breakfast we headed to the town center and Ballycastle harbor to sample the Irish way of life. In this first shot I was able to get a colorful sunset over the harbor by using a Singh-Ray 3-stop soft-step Graduated ND filter to balance the tones in the fiery sky with the shadowy harbor. I chose the soft-step grad for a very specific reason — the irregular horizon line created by the tree tops and the masts of the sailboats sticking up into the sky. This situation prevented the use of a hard edge filter and filter holder particularly because the masts would show the filter transition. Handholding the soft transition ND grad and dodging it up and down during the exposure helped avoid any sign of a transition. 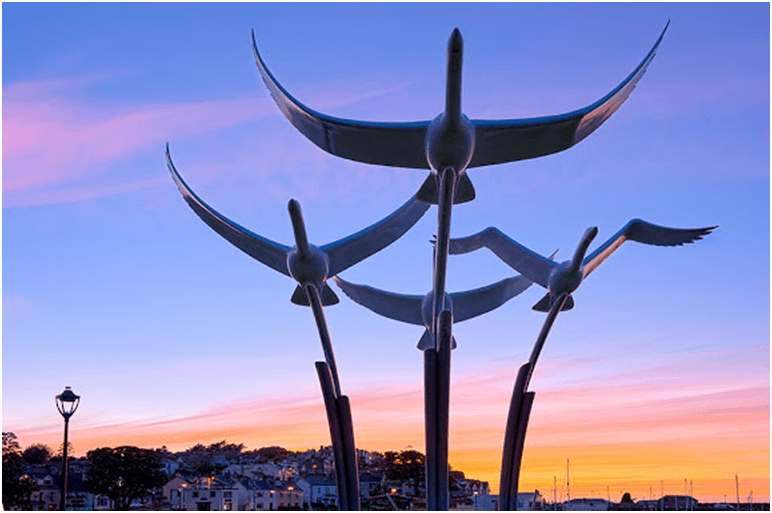 As I continued to explore the harbor, I came across this graceful sculpture of four swans in flight high above a children’s playground. I wondered about the significance of this artwork while I walked around it several times trying to find a good camera angle. While the sculpture itself is a worthy subject I wanted to include the delicate pastel hues developing across the sky. I settled on this upward angle to emphasize the flight of birds and capture the ethereal light above. I selected my 1-stop hard-step ND Grad to help achieve my vision. I placed it at a slight angle to best cover the entirety of the sky and again dodged it slightly during the exposure. This is a difficult shot to get right and no amount of filter use, no matter how creatively used, is likely to give you a perfect exposure. I knew at that moment I would have to optimize it back home in post process. By the way, I later looked up the sculpture and found that it represents the Celtic legend of the Children of Lir who were the four children of a once-widower king who were transformed into swans by a magic spell cast upon them by a wicked and jealous stepmother. 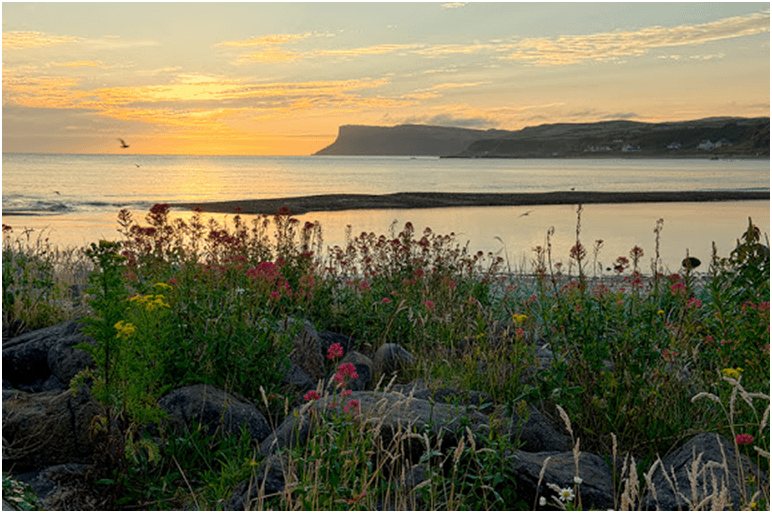 The next morning I was out the door well before dawn, intent upon photographing a ruined abbey and cemetery just a mile or so from our bed and breakfast. After a somewhat disappointing sunrise at the abbey, I drove back into town and saw the sun finally providing some inspirational light. I parked near the Ballycastle harbor where I had spent the previous afternoon and set up to take this shot of the bay with the 600 foot rocky headland in the distance called Fair Head. Near the shore I found this small patch of wildflowers and set up my shot using a 3-stop, hard-step ND Grad. I took a few test shots and found that the early sun was overpowering the scene making it nearly impossible to hold back the sky while bringing the flowers out of deep shadow. So I waited a while until the sun was blocked behind the clouds. The decision to wait paid off. For a brief time, I was able to get much softer light. The detail of the flowers was now clearly visible and the background light was soft, warm, and inviting. 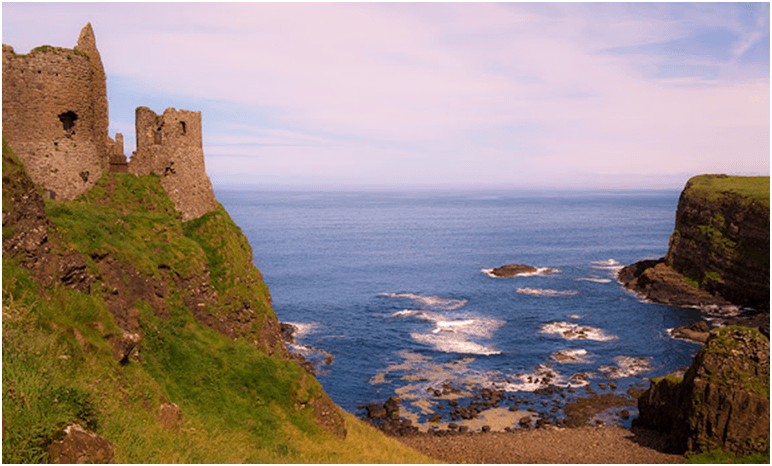 Over the next two days we visited many interesting locations in the county of Antrim. Here is the famous Dunluce Castle, one of the great 13th century medieval fortresses perched on the seaside cliffs of the north Atlantic. While I could envision in my mind’s eye a fantastic image photographed at sunrise or sunset we simply would not have the time to return during the golden hours. All the more reason to always bring your Singh-Ray filters with you. While I wasn’t able to return during a better time of day, I did try the make the most of the flat midday light. Above is the scene taken with no filters. Although quite nice the light lacks interest. I opted to not take a straight-on shot of the castle because that would only add more mediocrity to an already mediocre scene. By including the rocky shore and the churning and dangerous tides, I think it emphasizes the impenetrable nature of this castle. 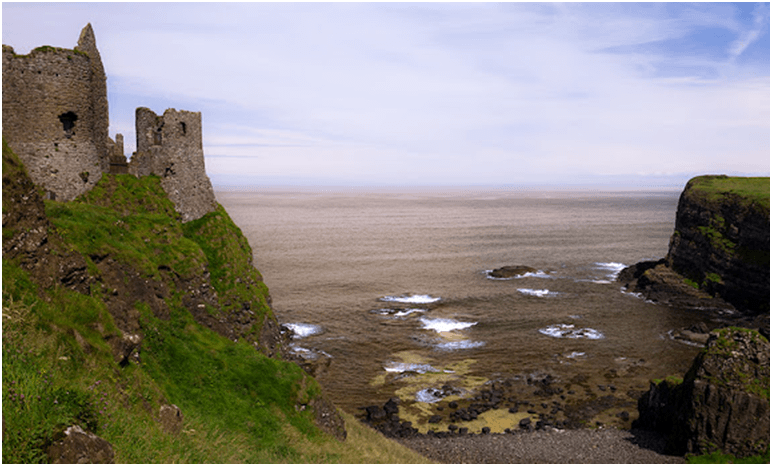 Now take a look at this image. I used my Singh-Ray Gold-N-Blue polarizer to completely change the color palette and (hopefully) the mood of the photograph. By turning the filter ring toward gold polarization it de-saturated the color while actually boosting the greens and yellows. The effect is that of antiquity, almost like looking into the past. 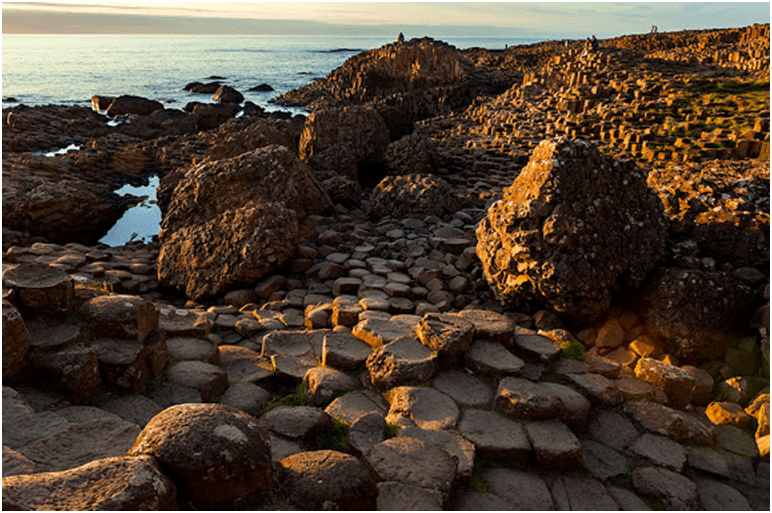 At the top of our list of sites to see on this trip was the incredible Giant’s Causeway. Situated on the northeast coast it is a windy and barren strip of volcanic basalt extending into the sea. The polygonal lava tubes solidified millions of years ago to create a fantastical causeway of stepping stones tightly interlocked to one another with repeating geometric patterns. In this image I found a good high point giving the perspective of a naturally paved walkway. As the sun was beginning to set to my left I used my LB Warming Polarizer to enhance the golden hues and eliminate any blue cast in the shadows. I also hand held a 2-stop ND Grad at an angle allowing me to increase the exposure to ensure the basalt tubes in the shadows contained detail. 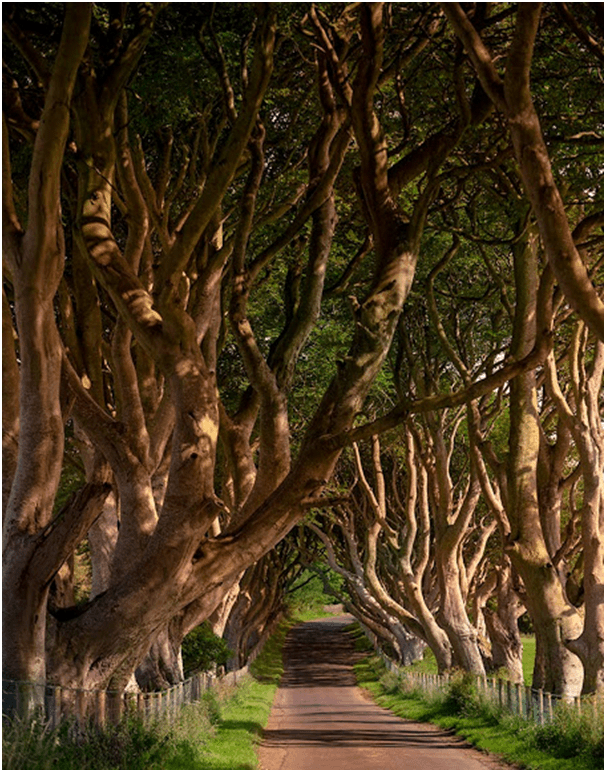 In this last image I used my Gold-N-Blue Polarizer once again to bring life to another image taken in flat lighting. I was hoping to get some fog or moody overcast light when we set out to visit the Dark Hedges, a double row of beech trees planted long ago by the owners of Gracehill House. Unfortunately, it was a rare sunny day and the light was rather harsh and flat. If it had not been for the Gold-N-Blue, I probably would have just moved on to the next location, but a little experimenting with my Singh-Ray filters saved the day. Proof again that Singh-Ray filters can often take a so-so image to newer heights.

Our trip to Northern Ireland was filled with scenic beauty at every turn. It is definitely a premier photographer’s destination. With six days left we plugged in our next stop in the GPS — Galway, Republic of Ireland — and headed south. Now that we got a taste of the Irish scenery our expectations were running sky-high again.