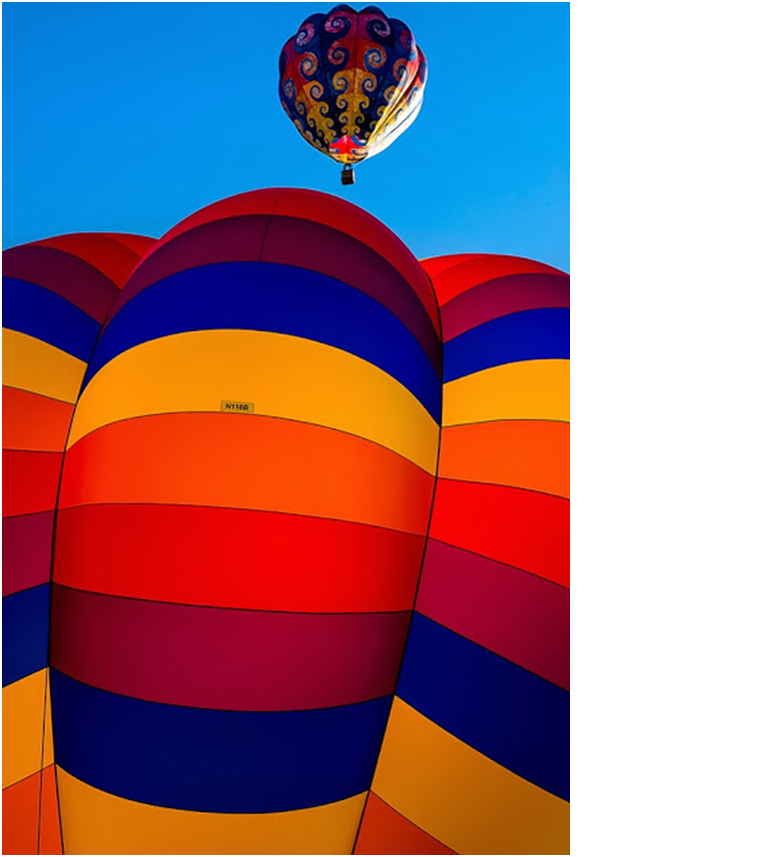 There is no doubt that New Mexico is blessed with a multitude of dramatic natural areas and inspiring historical architecture, but what really stirs the soul of this photographer is the magnificent light to be found in the state. This is particularly true of the northern areas around the Sangre de Cristo and Sandia mountain ranges.

During this most recent visit, I found all the national parks to be closed, but nobody had been able to turn off the light. I promptly decided to go after some great color images at the annual Albuquerque Hot Air Balloon Fiesta.

Although I was equipped with my full collection of Singh-Ray filters, I felt this would be a somewhat different kind of photographic challenge.

Having never been around even one hot air balloon, much less attempting to photograph a sea of them, I wasn’t sure what to expect. I figured I would need to work without a tripod because of the large crowds (each day over 100,000 people from around the world attended), I’d probably have to set my cameras to shoot at a relatively high ISO and with focus tracking active to make hand-held shooting easier, and I would want to accentuate the bright blue skies and the eye-candy colors of the balloons. These shooting criteria certainly would call for the capabilities of the Singh-Ray LB Warming Polarizer and LB ColorCombo to provide excellent polarization while minimizing the effect of increased exposure times with their low filter factor. In my estimation, shutter speed would be the primary consideration and I planned to bump up the ISO first before deciding to change my base minimum shutter speed of 1/250 of a second and an aperture range between f/4 and f/11. I wasn’t too concerned that I could achieve motion-freezing shutter speeds during the latter part of the morning launch of the balloons, but I wasn’t sure how well I would fare in the low pre-dawn light.

With all these considerations swirling inside my head I decided to couple my Nikon D4 with a mid-range zoom (24-70 mm), and my D800 with a short telephoto zoom (70-200 mm) to isolate the balloons aloft. In the photo above I shot this launching balloon coupled with one that was being inflated on the ground as a strong foreground element. I used the LB ColorCombo to really boost the color and bring the sky into a rich early-dawn blue. 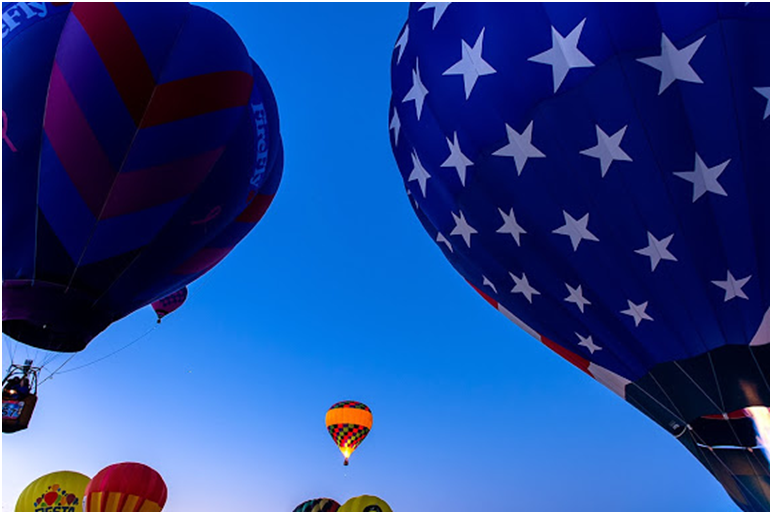 Here is an excellent example of the shooting challenges I encountered during what is referred to at the Fiesta as the ‘Dawn Patrol.’ Each morning before dawn the Fiesta officials determine whether the morning weather will be suitable for balloon flight. A few designated balloons are launched to test the winds and this is one of the best opportunities to get some incredible light in your shots. As you can see in this image the light is still low and the sky is just starting to change as the sun is just coming up in the east. The low filter factor of the LB ColorCombo still allowed me to get a motion-freezing shot. While I did have to increase the camera ISO to 1,600, I was forced to shoot at 1/60 of a second. Because I zoomed out to 24 mm I could get away with a lower shutter speed and a relatively open aperture of f/4. 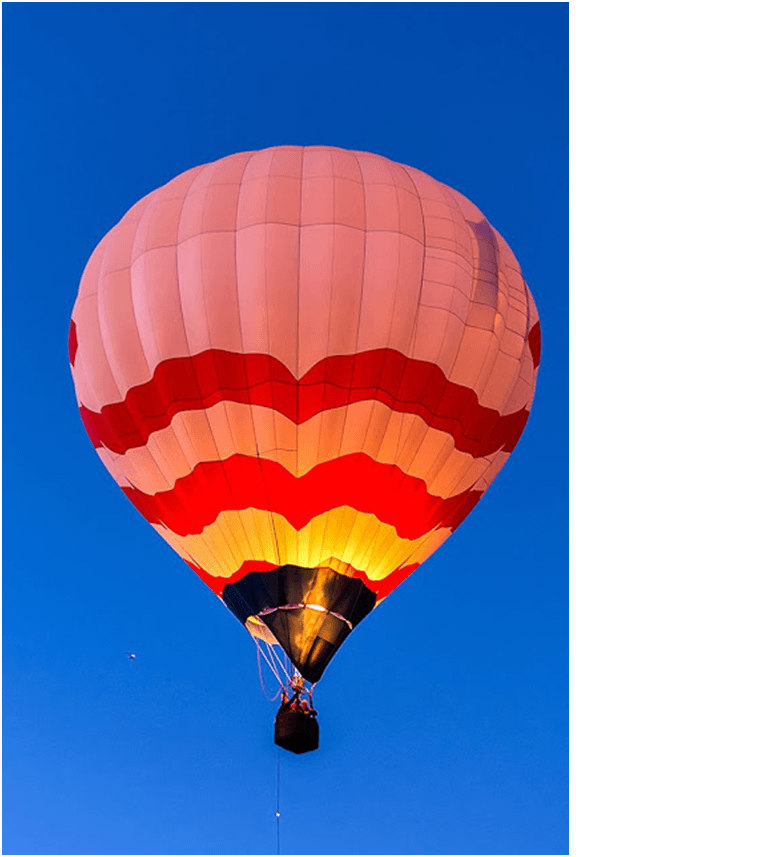 I alternated between the two cameras all morning; one with a mid-range zoom and the other with a short telephoto zoom. One camera had the ColorCombo attached and the other had the Singh-Ray Warming Polarizer screwed onto the lens. There were many opportunities to get abstract studies of color as the balloons lay sideways on the ground while they were being inflated by the launch crews. And alternately, all I had to do was look up to the sky and there were floating targets of super rich color, shape, and design. It was a blast of a time and I kept busy all morning. The following images show a few of my favorites. This balloon above, which I caught as the pilot ignited the propane burners, was shot using the LB ColorCombo. I think the glow of the flame inside the balloon really adds to the image. 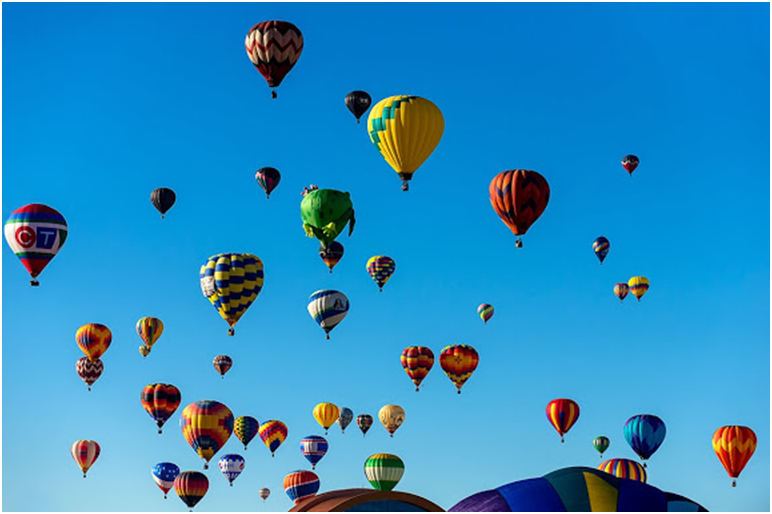 In this cluster you can see the variety of designs and how well they’re enhanced using the LB Warming Polarizer. The lighter, brighter characteristics of the Singh-Ray polarizers are a big advantage in situations like this. While the balloons float slowly and serenely across the sky they are moving objects nonetheless, and it is assuring to know that I can add a filter to my lens and not be concerned with a significant loss of light. Slow shutter speeds would force me to boost ISO to a point where introduced digital noise may affect the beautiful skies. Or worse, if the shutter speed were too slow, the balloons will look soft upon close inspection of the images. 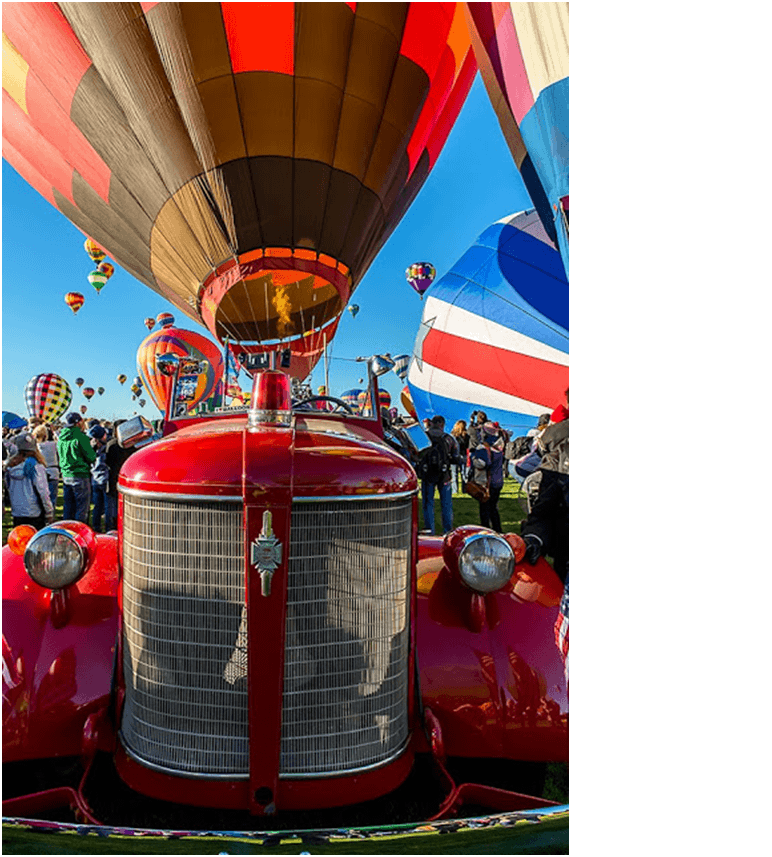 Not all of the fun at the Balloon Fiesta is concentrated in the sky. Back on terra firma, the launch/recovery crews are having a great time – as you would expect at any festival. Here the LB ColorCombo brings out the fiery red of a fire truck I came across parked next to one of the crews as they worked to inflate another balloon. 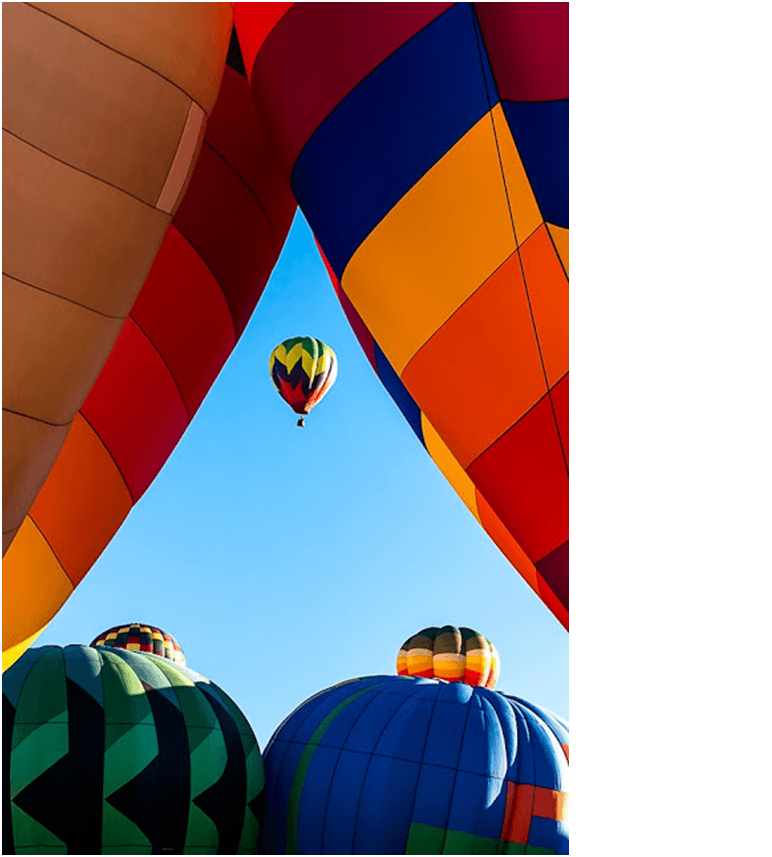 The LB Warming Polarizer is used here to bring a warm glow to the framing balloons. Shooting the balloons at the Fiesta was a great exercise. There was opportunity-after-opportunity for capturing  interesting shots. With a little imagination and creativity it is pretty easy to use the surrounding balloons to create eye-catching abstract color compositions. 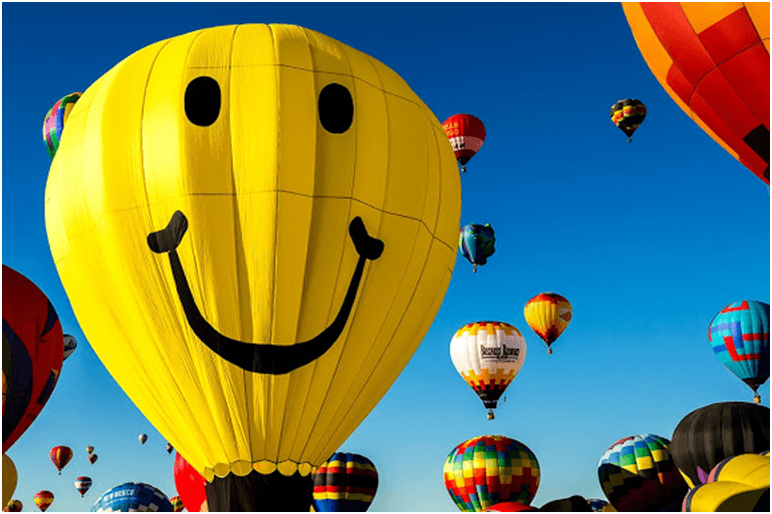 And finally, I got a big smile from this guy when I took his picture using the LB ColorCombo. I think he pretty much reflects my own feelings that morning. The Albuquerque Hot Air Balloon Fiesta is a great event for the photographer. The colors, the whimsy of the designs, the playful atmosphere, and the crisp clear air of the fall season in the high desert all come together for, shall I say, an “uplifting” experience – all within the backdrop of the incredible New Mexico skies.