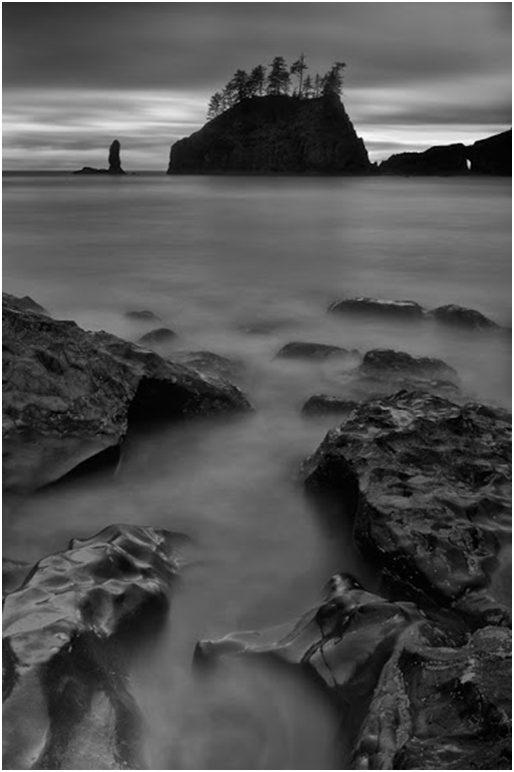 From the time I started taking landscape images, there’s been something mysteriously drawing me to Olympic National Park, but it wasn’t the vampires and werewolves described in the Twilight books. The rugged Washington coastline with its craggy sea stacks and rough seas looked like just the place to make dramatic images. The only issue was the weather.

When author Stephenie Meyer wrote the Twilight books, she picked the part of the lower 48 states with the highest annual rainfall. She could’ve just asked me. I could’ve told her. For the past six years I’ve been trying to take time to get to this national park, and every time the weather reports have turned me away. I’ve come to expect some type of meteorological challenges whenever I go out to photograph. However, traveling a great distance and investing the money necessary to shoot a location with an 80% chance of showers during my stay are odds I don’t find encouraging. I can live with 40-50% chance of rain as most weathermen err on the high side…but 80% means it’s going to rain on us the entire time.

Then I got lucky. The forecast for this trip had a 30% chance of rain for a 3-day window, followed by periods of, get this, showers. Though it wasn’t a guarantee, there seemed to be a small chance that we could get some kind of weather that would be worth photographing.

Two days and seventeen hours in the car later, we arrived in Forks, Washington, which is the gateway to Olympic National Park and the fictitious home to teen vampires and the people who love them. We checked into a hotel that had cardboard cut outs of the cast from the movies standing in the lobby. Most hotels in the area had some kind of Twilight theme to them to try to draw in extra tourist dollars.

The area didn’t seem as dark and dreary as I imagined, and the sky held white streaky clouds and pockets of blue sky as far as the eye could see. This area doesn’t get many days like this… and I for one was going to make the most of it. We loaded our gear and set off for Second Beach, an iconic location tucked away on a half-mile trail through the lush rainforest.

Giant logs lay strewn about the shore, the skeletons of massive trees that once stood watch over the land. We searched the area for our shots, and while the explosive sunset we had hoped for never materialized, we had some nice streaks in the clouds, and I found a spot with some really wonderful foreground rocks. With my waders on, I walked through the waves to find a perch looking out to some of the more iconic sea stacks just off the shore. I knew I wanted to make a longer exposure to get some blur to the water and make a more minimalistic image. I used the Singh-Ray Vari-N-Duo filter to stop down and give myself an almost 3 minute exposure. I used the 4-stop soft-step Graduated ND filter to hold back some of the light from the upper portion of the sky. Though there wasn’t any extreme color, there were some gaps, and those gaps were quite bright due to the setting sun.

We walked the coast until well after the sun had vanished, smelling the fresh air, and making exposures similar to this that utilized not only the filters, but also the beautiful scenery at hand. We hiked back to the car in the dark, and I’ll be honest; I thought about those vampires again, just a little. 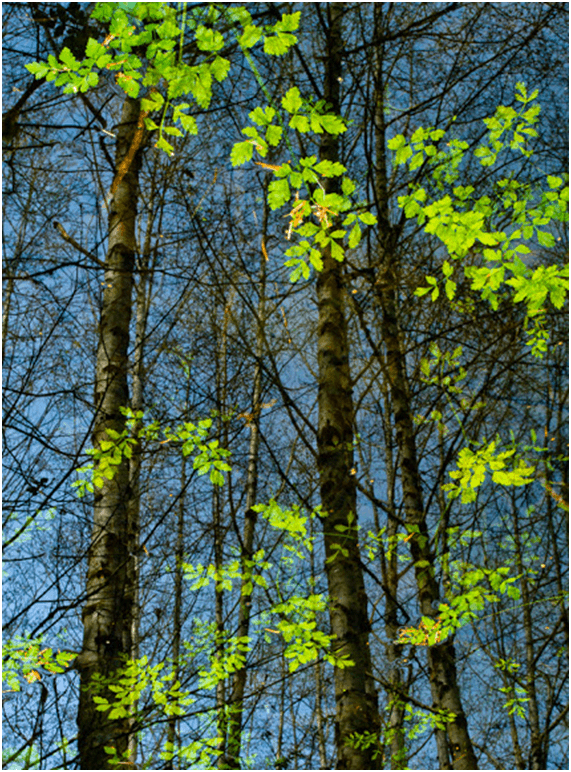 This next shot won’t be for everyone. We drove around the Hoh rain forest for the afternoon, and had bright sun to deal with, which is not common for this area. While we drove I found this great pond with reflections of the trees that surrounded it. There were lots of lovely green leaves floating throughout the pond.

I love abstractions that play with the viewers’ eye. I put the Singh-Ray LB Warming Polarizer on, and then turned it to find just the right amount to see the trees clearly reflected in the water, and also see the green leaves floating on the surface of the water — thus creating the illusion that the leaves might be on the trees. The sun is rare here, but it made for great reflections, and the filter made it possible to make the most of them. 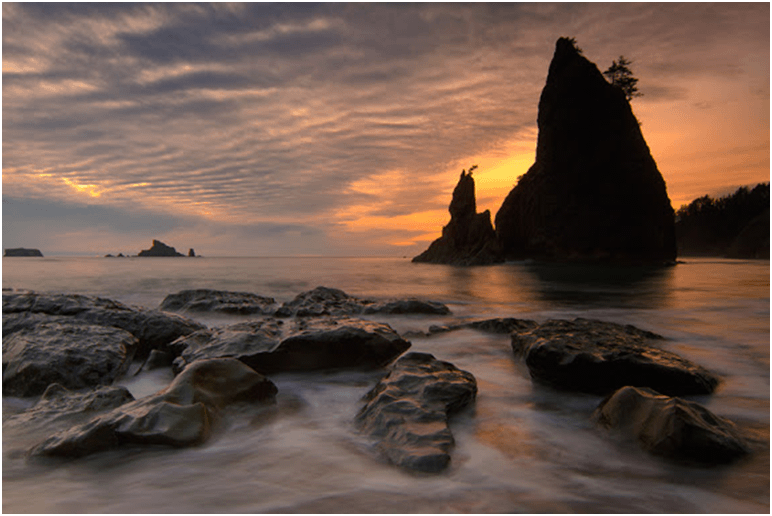 The next night we walked out to Rialto Beach, my favorite among the beaches we visited. We had about a mile hike along the shore and a stream to cross before we could set up to shoot the sea stacks. The tide was perfect, and the sky looked far more promising than it had the night before. There was no breeze, so the notorious sea spray wasn’t even a problem. This was as perfect a night as we could hope for.

While we set up and waited for sunset, I counted nearly 50 seals bobbing just off shore watching us. Three bald eagles were sitting in the nearby snags watching the sea for the slightest movement of their evening meal. The sunset that night was perfect, a warm glow began that lit up the sky. Once again I had found the perfect rocks for foreground, I set up, waders on my feet and dug my tripod in for the duration. I used the LB Warming Polarizer to maximize the evening glow and a 3-stop ND Grad filter to hold back the brighter sections of the sky. 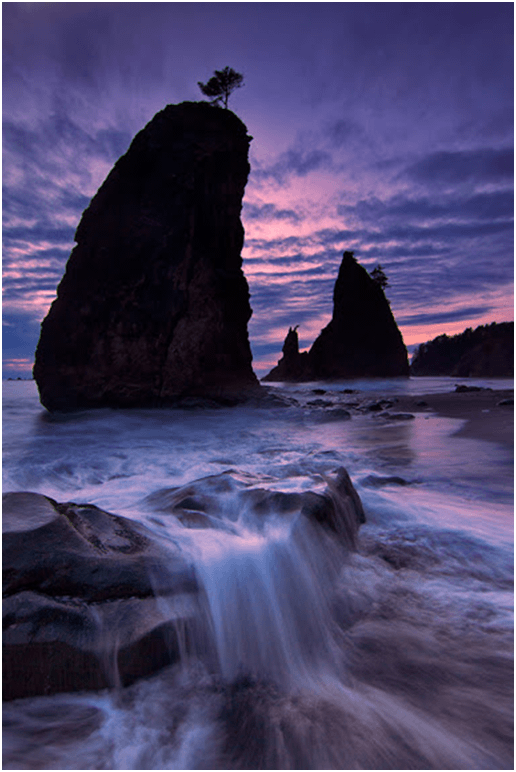 The sun eventually faded, and I found a different set of rocks that aroused my interest. I loved the water that rushed in and cascaded over this particular rock, but the fading light was making it difficult to get the exposure time I needed. I removed the polarizer and used only the 3-stop soft-step ND Grad filter to hold back the brighter sky. Then I bumped up my ISO to 640 so I could get a nice 1-second exposure, which was perfect to capture the whole cascade and reveal my little waterfall. I took three or four shots of this setup to get it just right and have the water look the way I wanted. I loved the way the whole scene played out, and this image became one of my favorites from the trip.

We went back to the hotel that night giddy with the prospect of processing our images, and looking forward to possibly another day in this prehistoric looking coastline.

Light is fleeting for nature photographers — it’s what makes getting the right exposure such a challenging job. It’s also what makes certain images special. Knowing you are in an amazing location, seeing perfect light, and having the tools necessary to capture the best images possible is what we as landscape photographers live for. The results create a magic that you don’t have to be a vampire to enjoy.