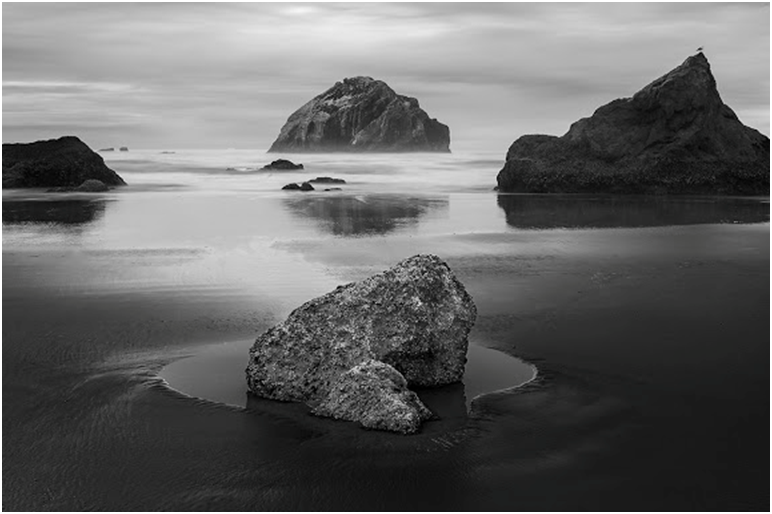 What an incredible landscape; the sea stacks are of course the highlight, but I had a 7-foot high tide to contend with and… you guessed it… plenty of clouds. Two of the most popular sea stacks on the beach are known as ‘Wizard’s Hat’ and ‘Face Rock’ seen in the image above.

Beaches can be beautiful places to sunbathe, but they can also be visually mundane. Bandon’s unusual sea stacks provide plenty of visual interest and story for a landscape photographer. The sea stacks are erosional, carved from sandstone and marking former positions of the coastline. The sandstone is part of the Otter Point Formation — a belt of rock running along the southern Oregon coast formed somewhere offshore and later added to the continent through a number of geologic processes.

Bandon’s high tides provided a constantly changing compositional puzzle. At high tide that day, around 1:30 pm, many of the typical foreground elements disappeared below the water level and the area of surf became quite large. That’s when I would use my longer 24-70mm lens fitted with my Singh-Ray Gold-N-Blue Polarizer plus 7 additional stops of Singh-Ray ND Filters to slow the shutter speeds down to nearly a minute and create surreal mid-day motion blur. 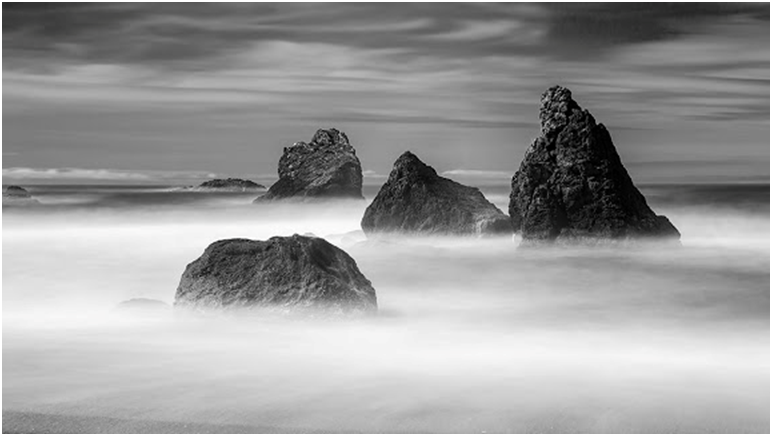 When color is an important feature of the subject, I shoot the subject in color. However, when heavy clouds soften the light and create a nearly monochrome landscape like Bandon Beach, then I immediately begin to shoot for black and white. The Singh-Ray Gold-N-Blue Polarizer works much like the color filters that photogtaphers once used with their black and white film. One of the magical results produced by this filter is the additional depth and dimensionality it gives my subject matter. As I view the image above, I can really feel a three-dimensional quality to the twin stacks that I am able to achieve only when using the Gold-N-Blue. 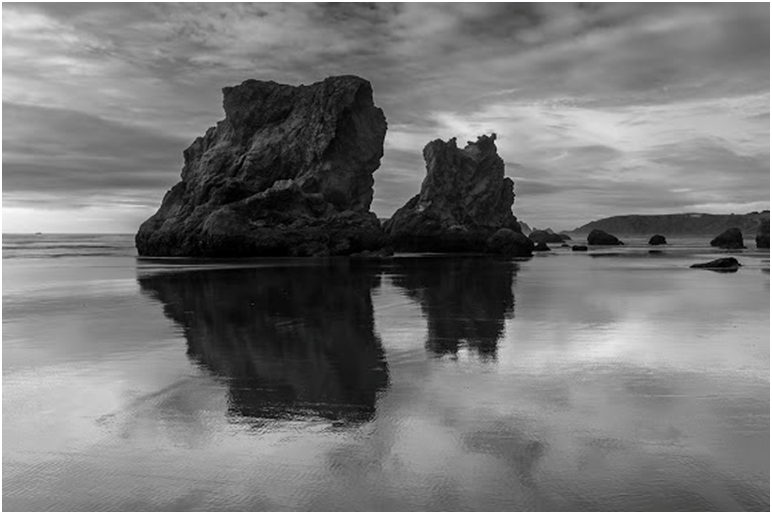 Bandon Beach offers many compositional choices. I find that I can continue to shoot through soft light and dull skies if I can recognize the potential impact that black and white brings to these scenes. To capture the intricacy and detail of the stacks which has formed over the millennium, I used the Gold-N-Blue to give my raw images a heavy bias toward magenta and red, with a hint of blue for the sky. This enables me to achieve a greater richness in tonality without introducing unwanted noise in the blue color channel. 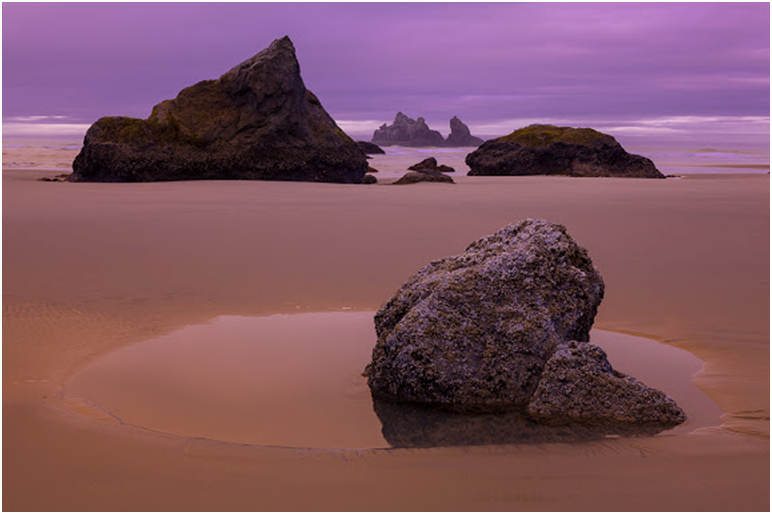 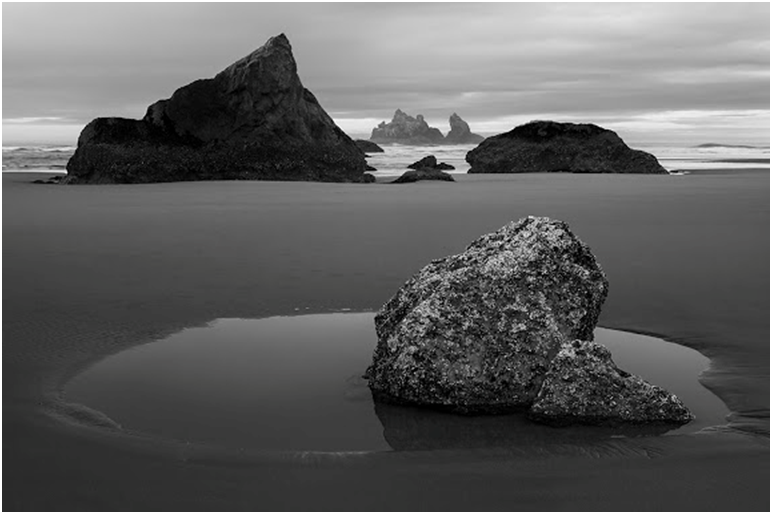 As can be seen in most of these images, the landscape opportunities at Bandon Beach involve working with repeated shapes and strong lines. Lines provide movement and rhythm. The repeating shapes provide a way to tie together various spaces in the image, in essence creating visual continuity throughout the frame. Bandon Beach, like so many landscapes, reveals repetition of shape as a result of the geologic forces in play. 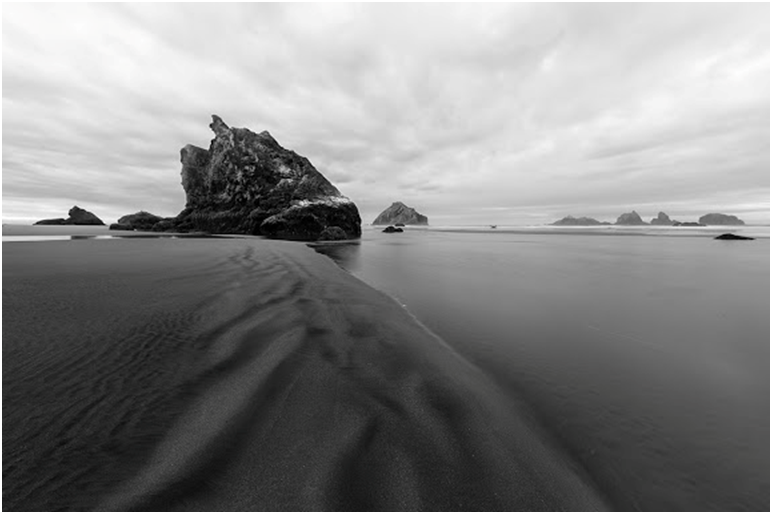 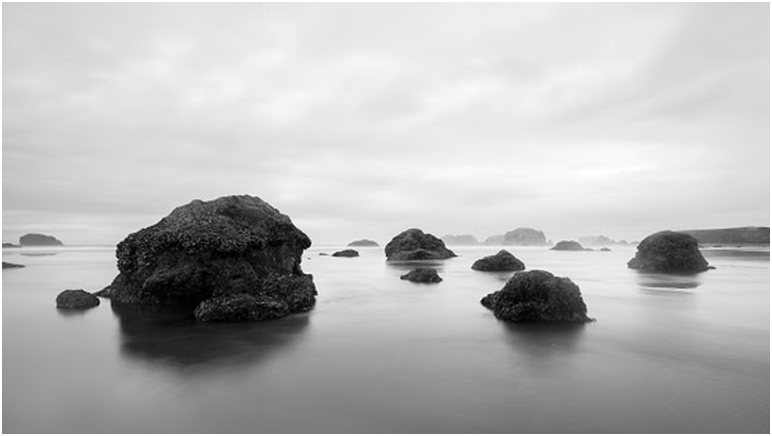 You’ll want to get into the surf for more dynamic compositions, so be sure to bring your rubber boots. Two and a half days was not nearly enough time at Bandon Beach, but I was grateful to have that much time and to be able to make the best use of the existing conditions to shoot dynamic, rich black and white photography – thanks to my Gold-N-Blue Polarizer.

Alec Johnson is a commercial and fine art photographer based in Saint Paul, MN.