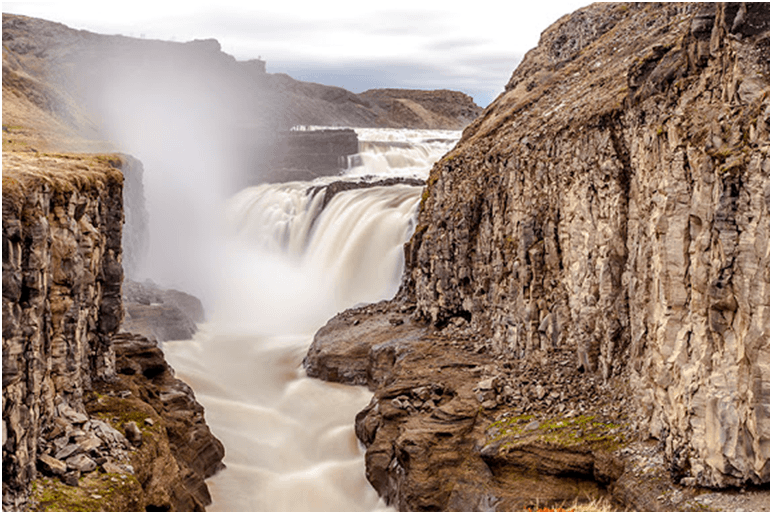 As a professional video producer/editor based in Boston, Scott Fisher has also taken on landscape photography as a serious hobby to help him learn more about framing and exposure. “I realized a few years ago how using filters would step up my game as a landscape photographer. I have always used neutral density filters in my video work so I was a bit embarrassed that it took me so long to start using them in my still photography.

“I currently use a Canon 5D Mark II with a Cokin Z-Pro filter holder. The great thing about the filter holder is that I can not only stack several filters at a time, but I can also buy one sprocket mounted LB Warming Polarizer that will fit any lens I have an adapter for. It is a very cost effective way to get the same polarizer to fit all my 77,  82, and 72mm lenses.

“At the beginning of June, I got a chance to take a quick trip to Iceland. I was based out of Reykjavik for the duration of the short trip, which limited how far I could travel each day. Along with distance issues, the weather really didn’t co-operate very much, but I made the most  of my opportunities. After all, it was my first trip to Iceland.

“This shot is of Strokkur, which is a geyser in Southwest Iceland in a geothermal area near the Hvítá River. We had a quick stop here. Luckily, this geyser erupts every 4-8 minutes, so I was able to get a lot of angles and compositions of this geyser. This image is my favorite as the clouds finally broke for once during the trip and it shows the height this geyser can actually reach.

“I used my Canon 24-105 f/4L lens which is my favorite for landscapes due to its versatility. The settings for this shot were an aperture of f/4 and an ISO setting of 3200. I upped the ISO and opened the aperture to increase my shutter speed to freeze the geyser. At f/4 I wasn’t really concerned with the depth of field in this shot. To make the blue sky pop, I used the Singh-Ray LB Warming Polarizer. To balance my exposure of the bright sky and the darker foreground, I decided to use the Galen Rowell 3-stop soft-step ND grad. I angled it slightly up on the right side as the left of my image was pretty dark with the clouds. 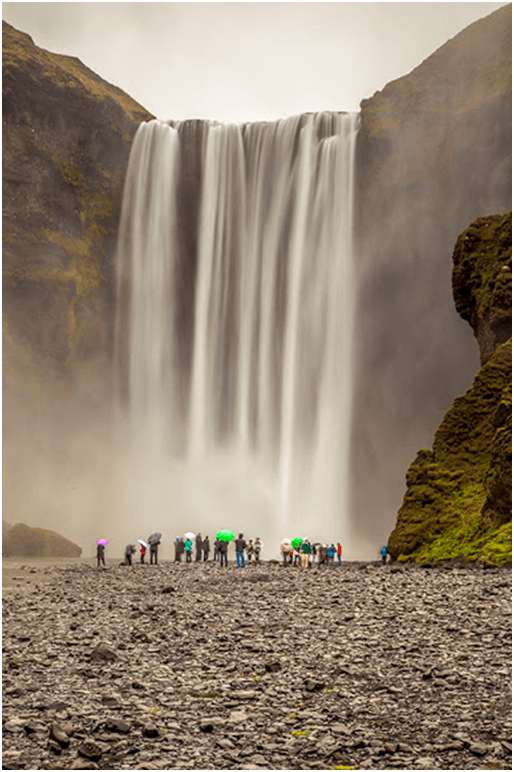 “This second image shows Skógafoss in the South of Iceland which is one of the biggest waterfalls in the country. As with most popular tourist spots, I would have had to be in the right place at just the right time to get the shot without people in the photo. On a truncated timeframe I didn’t have the luxury of waiting. With this shot, I really appreciated the tourists in the scene. Their brightly colored umbrellas really added color and they help show the scale of the falls very nicely.

“Again with the 24-105 mm lens, I ended up shooting at a very small aperture of f/22, an ISO of 50 and a shutter speed of 1 second. I did this because of the rain. I wanted a long enough exposure to get a nice blur on the falls but not so long that rain accumulated on my filters. I also wanted to get the tourists as sharp as I could and a long exposure wouldn’t have worked here. I used my LB Warming Polarizer and 3-stop Soft-Step ND grad. Even on such a dark rainy day, the sky is just so much brighter than the rest of the scene it would be completely over exposed without an ND Grad.

“The image at the top of this story features the famous Gullfoss waterfall in the canyon of the Hvítá River in southwest Iceland. This is a view of the falls most people don’t get because the trail to this viewpoint was permanently closed and had no safety rail along the edge of the cliff.  I had to really watch my step in the soft muddy grass while getting close to the edge. I ended up slipping with all my gear down a very muddy hill and had to spend the rest of the day in a muddy jacket and pants.

“I couldn’t have captured this shot without the 10-stop Mor-Slo ND. This image was shot at f/8, ISO 50 with a 20-second shutter speed. I try to shoot the lowest ISO possible and if I can, shoot at f/8 with the 24-105 lens. My lens seems to be sharpest when it’s set at f/8. This allowed me to shoot at a low ISO, my optimal aperture, and really leave that shutter open longer to get a brilliant blur of the water over the falls and down the river. Along with the Mor-Slo, I also used the LB Warming Polarizer and 3-stop soft-step ND grad.

“This is a shot of Reykjavik city from the top of Hallgrímskirkja Church. This was taken with my Canon 17-40 f/4 lens. It was shot with an aperture of f/8 which gives me greater depth of field and great sharpness, The ISO was set at 200 and the shutter at 1/125. Even though the camera was on a tripod, I increased my ISO 2 stops so I could increase my shutter speed slightly. I wasn’t worried much about camera shake. I was more concerned about any car that might make it into the shot and the fast moving clouds. My Warming Polarizer helped get the wonderful colors of the rooftops to come alive. I used a 3-stop soft-step ND Grad to balance the exposure of the sky with the scene in the foreground. The soft-step really helped so I didn’t need to darken the mountains in the background.

“I find that nature photography provides a very soothing and inspirational experience. I can be by myself. I don’t need models to pose just so. I don’t need assistants. There’s nothing more I need. It’s just me and my pack, plus a nice trail to hike. In Iceland, I found that such a short trip may have limited my options, but it gave me a number of useful learning experiences as I worked at turning bad situations into real opportunities. Those experiences will prove helpful in my future career.”