Editor’s note: We’ve been huge fans of Cole’s tremendous black & white work for years – and have often wondered what his images looked like out of the camera, before he applied his unique conversion and processing vision. So we were delighted when Cole sent us this post.

I’ve had a number of people ask if I’d do some more “before” and “after” shots. So here are five from my recent Oregon trip. All are long exposures created with my newly created “Perfect ND Filter Kit”. 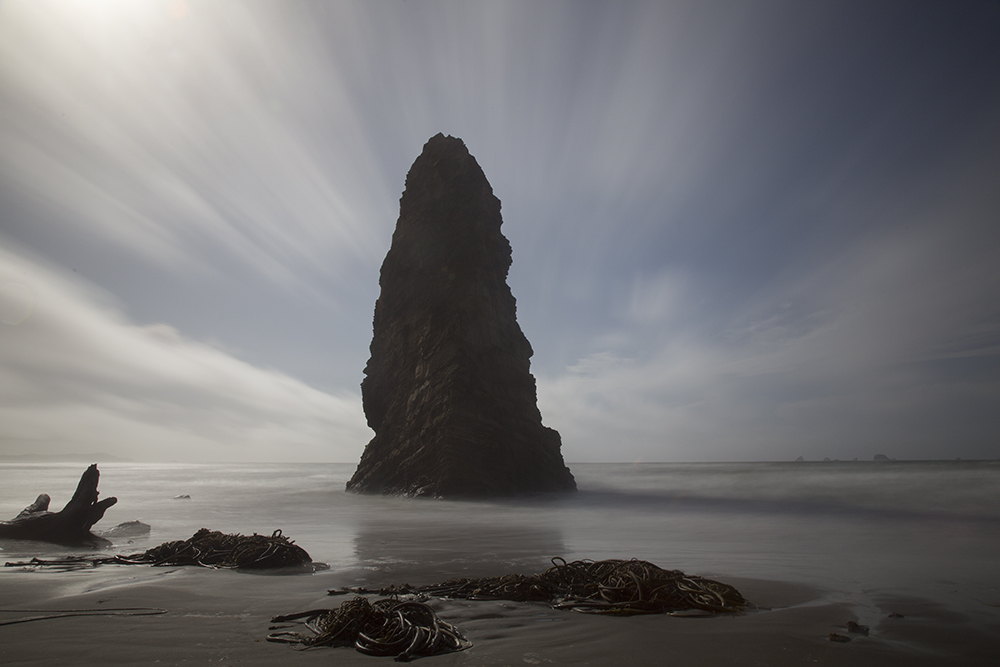 I’ve had my eye on this Monolith by Cape Blanco for several years, but I had never found an easy way to get down to the beach. On this trip I found one.

At the hour I get there (never early!) the monolith is backlit and so it’s a difficult shot. I was fortunate to have these great delicate clouds that streak well with a long exposure and I envisioned them becoming an important part of the image, if I could deal with the backlight.

Because this was a very wide angle shot I knew that vignetting would be a problem and so I chose to use my 15 stop Mor-Slo. By using a single filter in 82 mm, I eliminated all vignetting.

The sun was in the upper left corner and it was washing out the clouds and giving me a big flare. I used my hand as a sunshade for the 30-second exposure, properly placing it by watching where my hand’s shadow fell on the lens. I knew that later in Photoshop I’d have to even out the sky, because it was bright on the left and darker on the right.

Then there was the debris on the beach from the last few days of big storms and high tides, but I knew that I could deal with that in post processing. 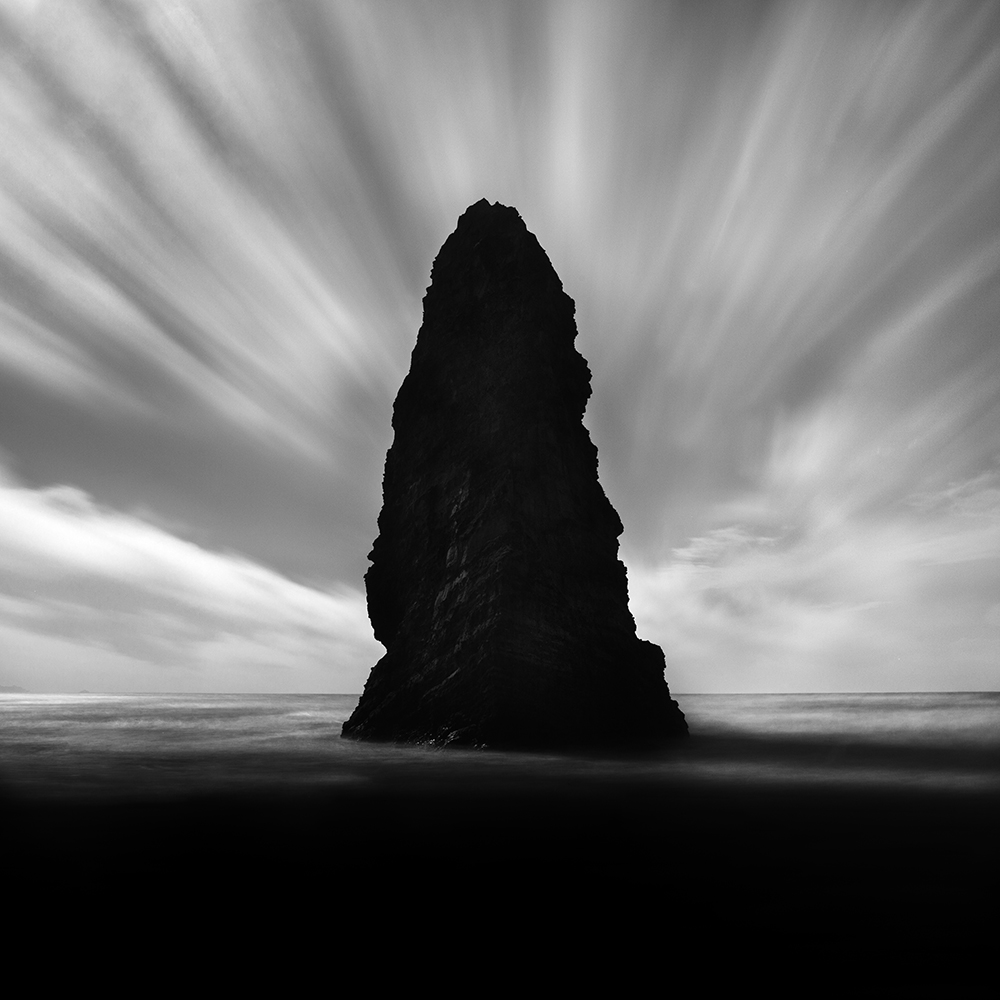 To deal with the debris I cloned out the tree stump and burned down the foreground to remove the rest. I don’t like anything that distracts from the main subject.

For the sky I burned down the upper left corner to bring out detail in the clouds, then I dodged up the right to balance the sky out.  I also used a very small dodging brush to follow the cloud streaks to bring them out more. Adding contrast also helped the clouds stand out against the sky.

The backlighting didn’t hurt me as much as I feared it would. There’s not much shadow detail in the Monolith, but I generally don’t prefer a lot anyway. 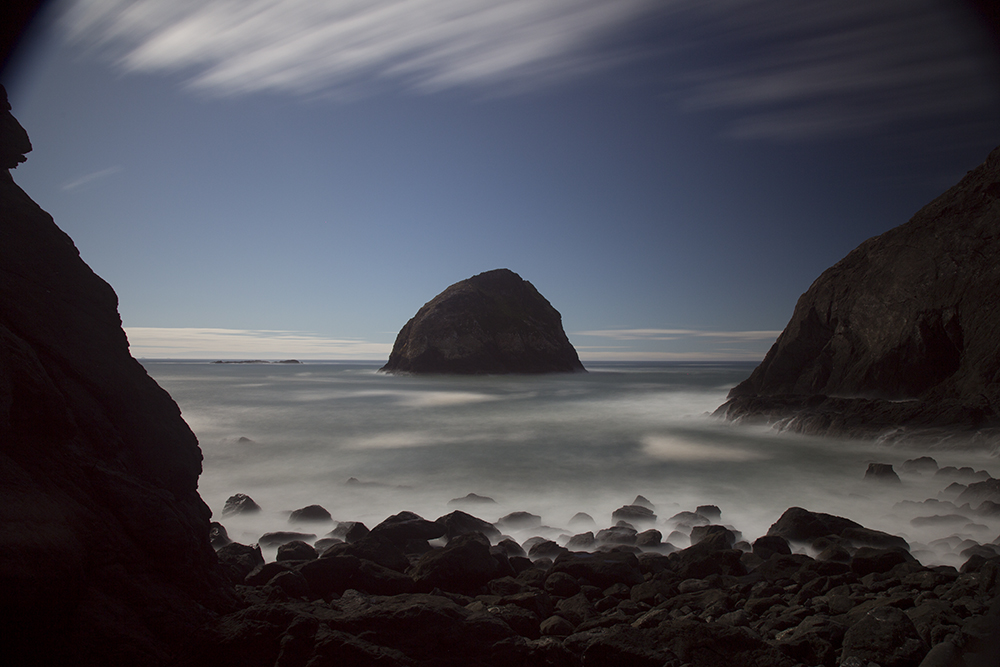 This is one of my favorite images from this trip. I envisioned this Monolith framed by the very dark hills on the sides, the rocks below and the clouds above.

This was a pretty simple image and an easy one…I thought…until I got home and found out that my Vari-ND was doing the dark pattern thing on me. It’s one of the quirks of all variable ND filters, sometimes at wide angles and when the sun angle is just right, you get these weird patterns across the image.

And here’s a heads up: the cheaper the variable ND filter the more it will do this. That’s why I use the Singh-Ray Vari-ND, it happens much less frequently and when it does, there are a couple of workarounds.

If I had noticed the patterning in the field I could have switched lens and probably have avoided it.  This was shot with my 24-105 at 24 mm, which is where the problem can happen, when you’re shooting at the wide end of your lens. If I had switched to the 16-35 and used 24 mm the pattern probably would have gone away, because 24 mm is mid focal length for that lens. And of course another option would have been to simply switch to my 15 stop Mor-Slo filter for this shot.

This image also had some vignetting in the corners and I didn’t like how the clouds were thin on the right side of the image.

You might notice that I underexpose my images, usually by about 1 stop. I do this for a couple of reasons. First, I like the look of a dark image with pronounced highlights.  Second, it makes it easier to deal with the wide dynamic range in these types of scenes where the sky is important to the image.  If I had opened up another stop, that sky would have easily washed out and I’d have lost the cloud detail. Shadow detail is not very important to my images, so underexposing works for me. 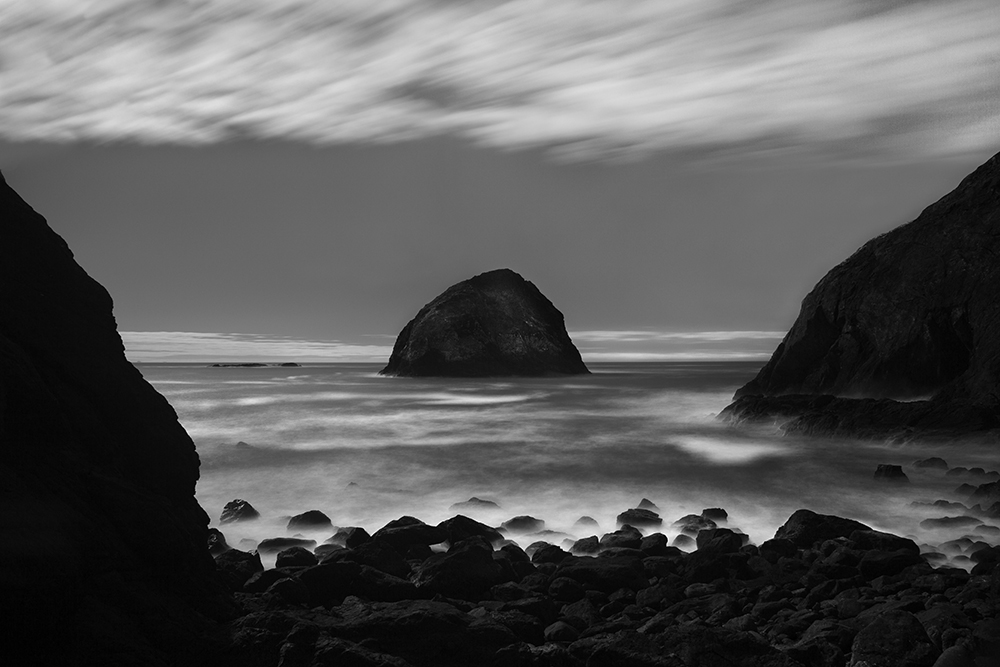 I fixed the dark pattern in the sky with some very careful and slow dodging (it’s easy for a sky to look blotchy if you use a small or hard brush or you work too quickly) I’m typically dodging and burning between 1-3% strength and for skies I’m generally using 1%. I used the clone tool to fix the vignetting and I also cloned in some clouds from the left to the right for a more balanced look.

I also used dodging and burning to bring out the water detail. I call it local contrast enhancement when I go back and forth between burning and dodging to increase the contrast in just one area.

I was happy with how this image turned out, especially after finding out about the dark pattern in the sky. 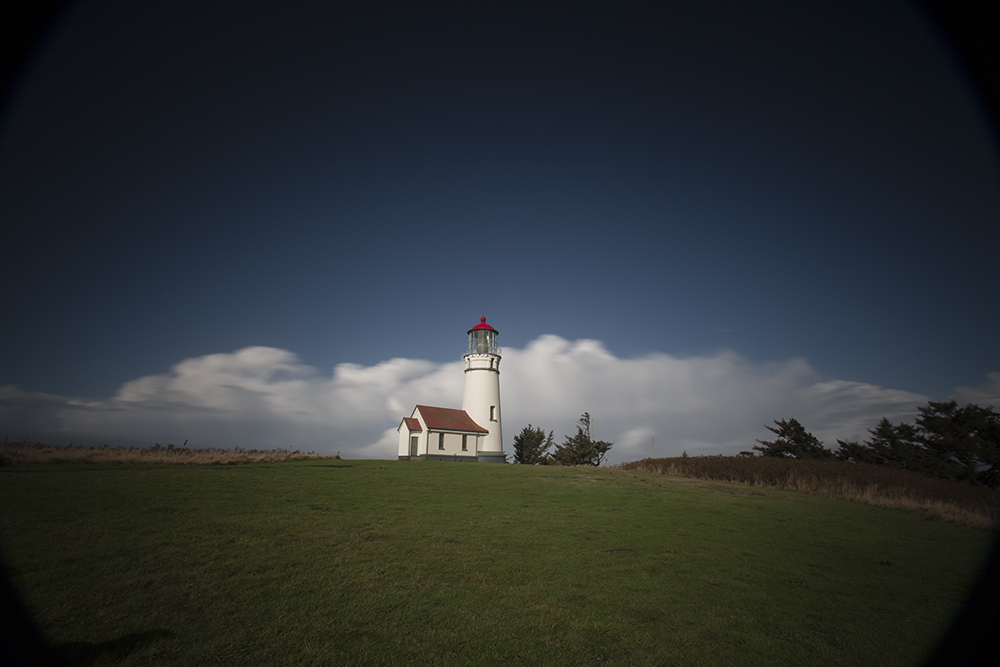 People are naturally drawn to lighthouses, as are photographers. But the lighthouse shot is soooooo overdone that I almost didn’t create this one. But I thought I’d see if I could put my twist on it.  I love to put the subject small in a large frame and then added a long exposure for a bit of movement.  I underexposed and used a polarizer because I wanted black skies. 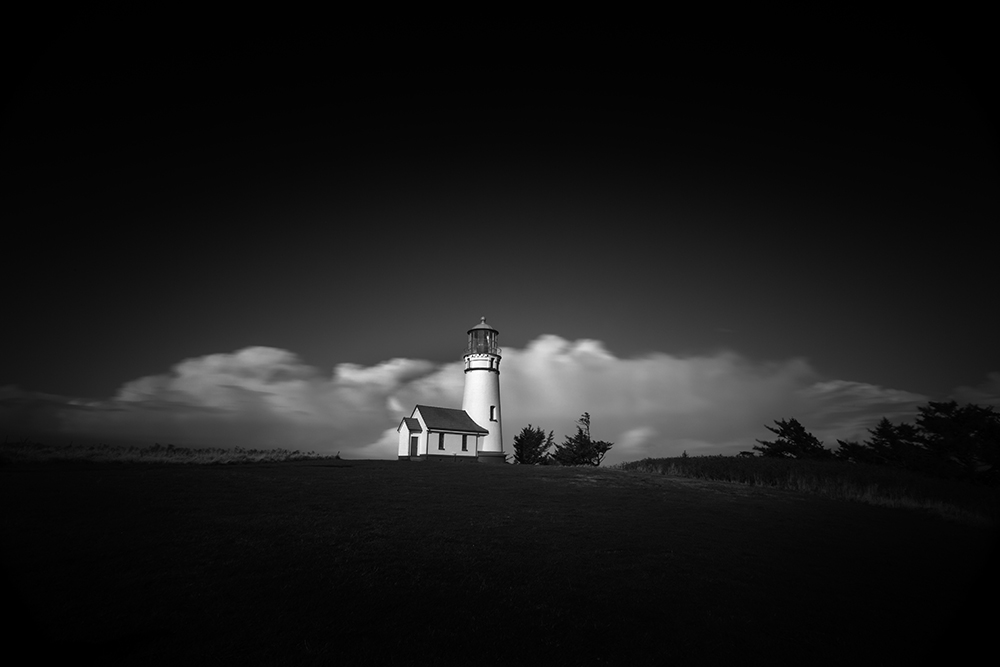 In the final image, I further isolated the lighthouse by burning down the foreground and the sky.  Looking at this image now, a few weeks after I last worked on it, I think I’ll remove those trees on the far right because I find them distracting. 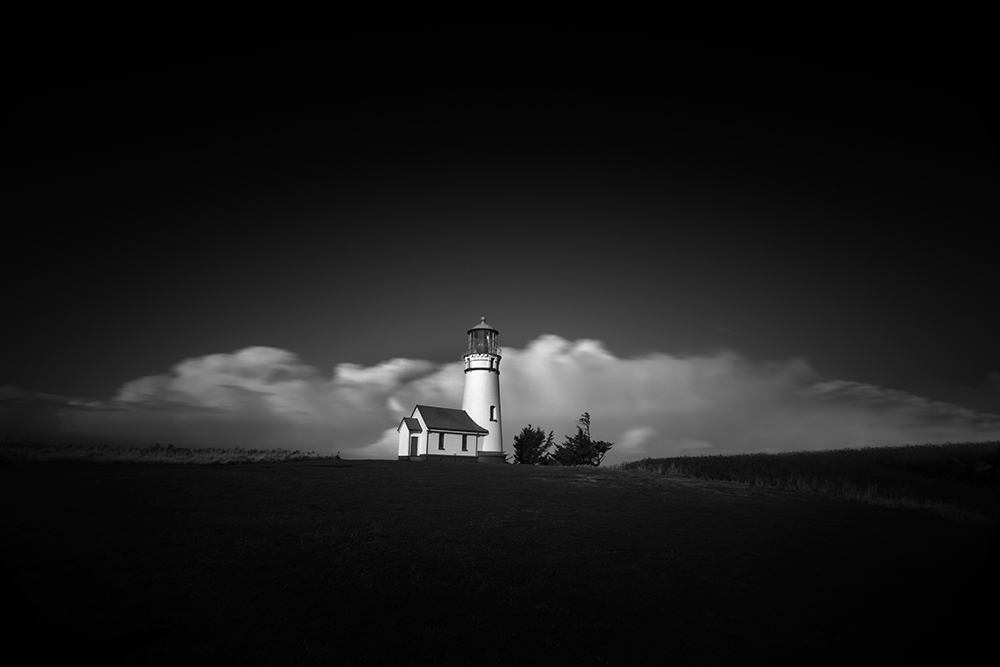 This illustrates how I work to refine an image.  I’ll let it sit for a few weeks and then look at it with fresher eyes.  I’ll then perhaps modify it again and then put it to bed for a few weeks more before I review it again.

Now that I’ve removed those trees, I’ll come back in a week to see if I want to keep this change or not. 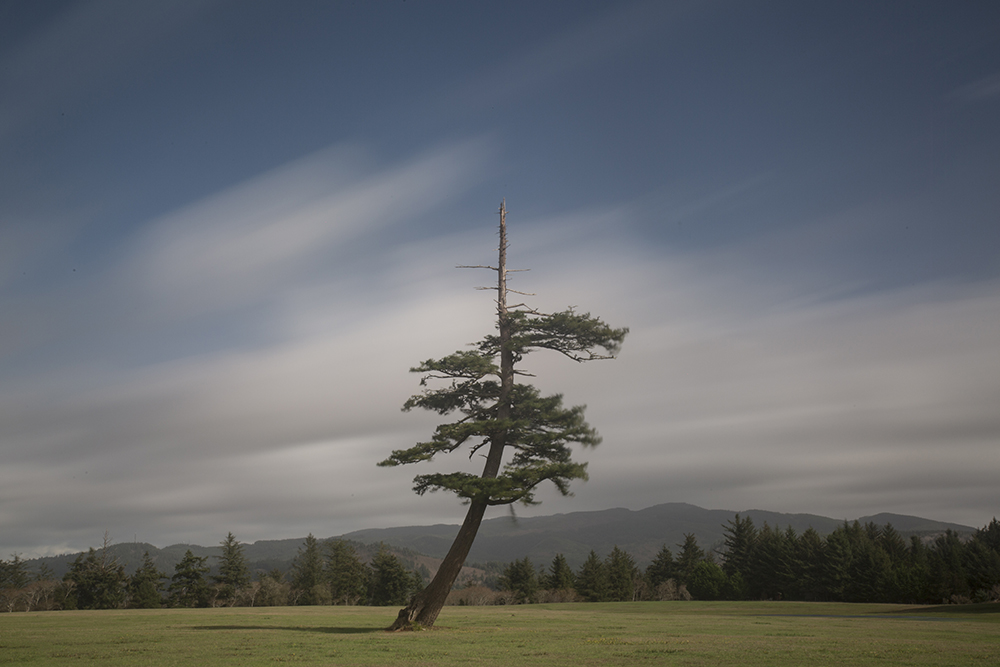 I was driving on the road to Cape Blanco when this tree just jumped out at me! I love centered images and struggled if I should center the tree where it hits the ground or the upright of the tree.  Centering the upright portion of the tree looked more centered and that’s what I went with.

It was a windy and hazy day which made the shot a little challenging.  I took about 20 long exposures of varying lengths (30 seconds to 4 minutes) trying to get the clouds just right and ended up using this one. One of the great advantages of the 15 stop Mor-Slo is that I can get from 30 seconds to 2 minutes exposure in bright sunlight with this one filter, it’s very versatile.

I didn’t underexpose as I usually do, because I didn’t want to lose the tree detail. It was still a processing challenge and I started over 4 times before I got it right. 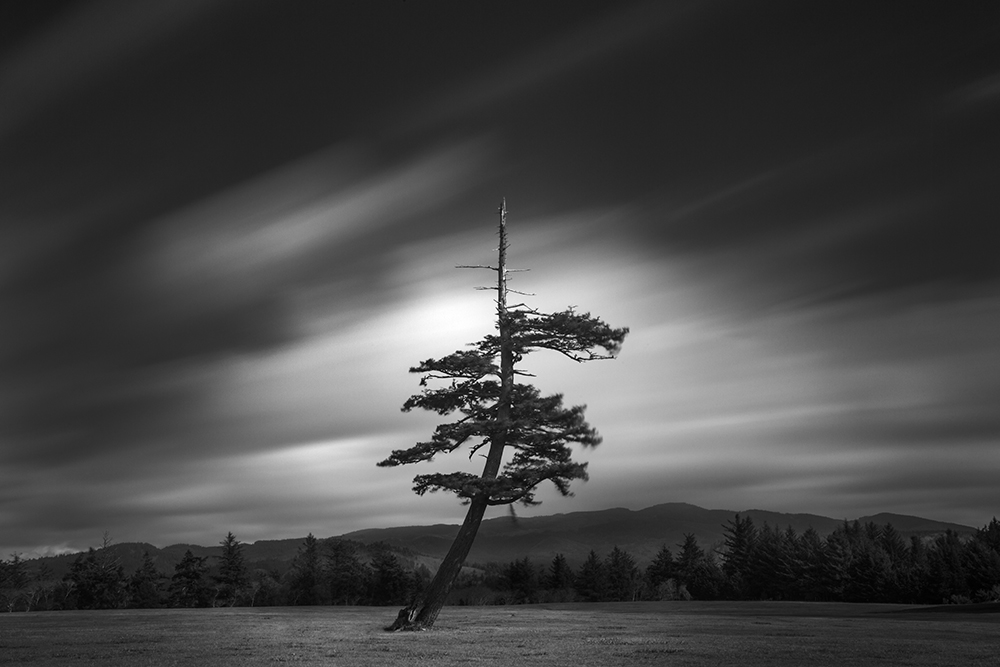 Again, I did a lot of dodging and burning on this image. Many people feel that they can do this with a mouse, but I certain cannot! I use a pen and tablet and the control is so much better than with a mouse. I never like to be adamant, but you cannot do what I do with a mouse.  Period.

I got rid of the shadow of the tree, that bothered me for some reason, and left a highlight around the tree.  I darkened the sky and left it bright behind the tree. As I look at the image today, I think that I may go back and open up the trees a bit on the right side.

As I make decisions about my images, it reminds me of how I’ve seen some others make those decisions. They will show the image to someone and say: What do you think I should do to this image? I am very opposed to that approach, I think one should have a Vision and not adulterate it with someone else’s opinion. 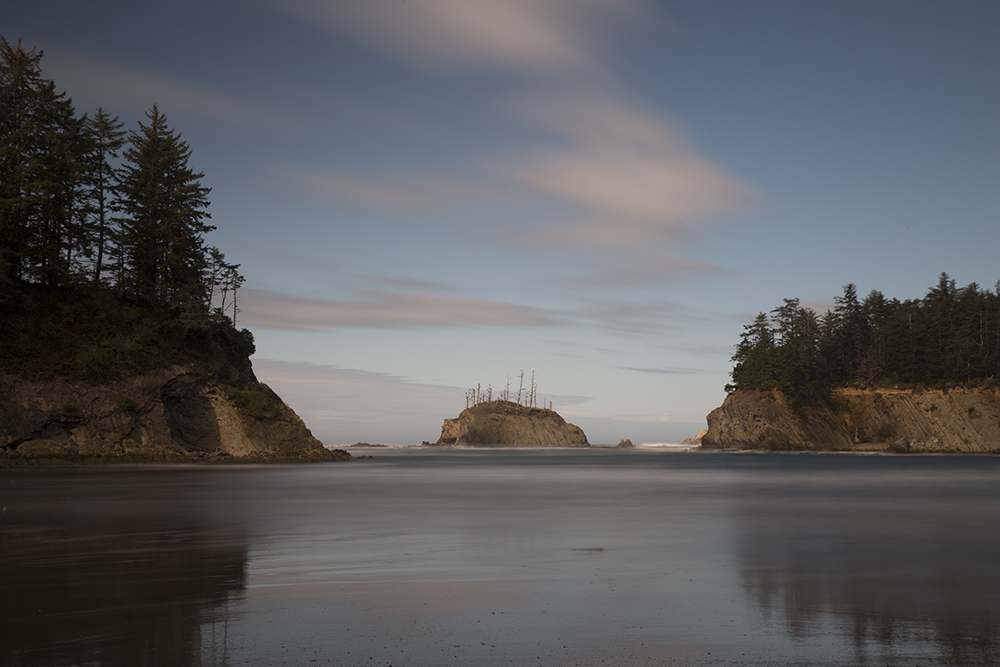 I was here for several hours trying to get the clouds and lighting just right. Sometimes the clouds were perfect, but not the foreground. At other times I’d get the shadowing how I wanted it but the clouds were no good.

I didn’t get exactly what I wanted in the shot, but I was confident that I’d be able to create the effect I was looking for in post processing. 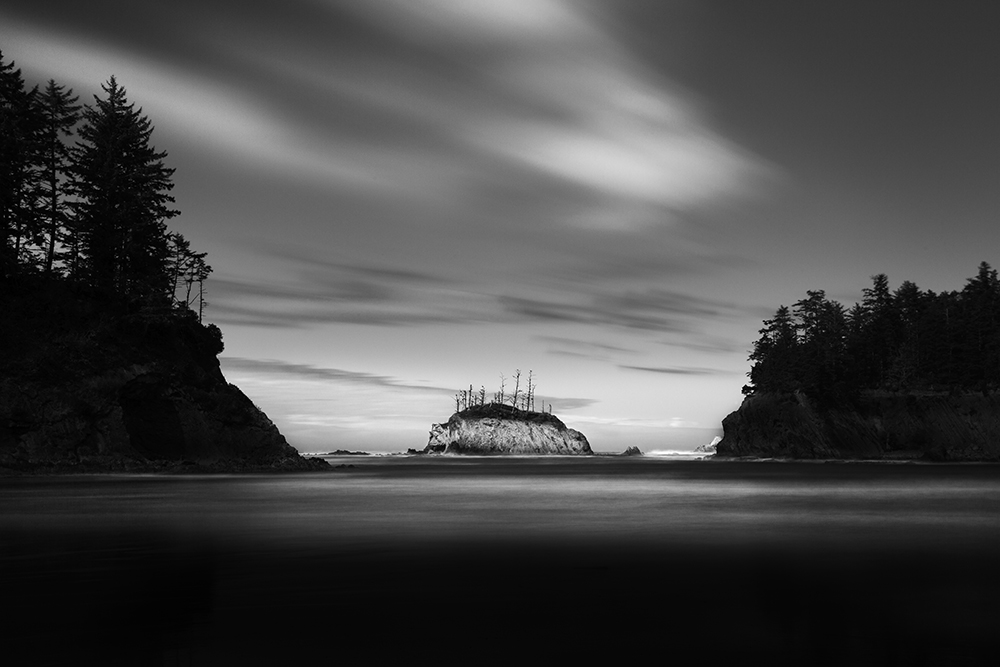 I burned the land down on the left and right to put the focus on the island. Then I dodged up the island to make it brighter. Then I went to work on the clouds, lightening the upper ones and darkening the smaller ones just above the island. Then I darkened the foreground to hide the detail and to bring the eye to the island.

So after seeing these “before and after” shots, I hope that you’ll not conclude that you need to learn more about Photoshop. It is not my intent to focus on post processing as the key to an image because that is exactly what I don’t believe.

Instead my approach is to have a Vision of the image and then let that drive the processing. When you have Vision, your processing then has purpose: to bring the image into compliance with that Vision.

And armed with that Vision, you don’t need to ask others what to do with your image, you already know in your head how it’s going to look!

Cole’s gallery on this site