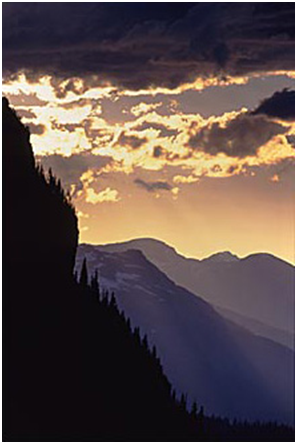 It’s still difficult to believe that our friend Galen Rowell and his wife Barbara are gone, since his work continues to live on in so many books, magazines, calendars and in our mind’s eye, and he still is such a presence in the lives of his friends, family and photographers everywhere.

Galen wrote this column for Outdoor Photographer in 1992 when not many photographers were familiar with Graduated Neutral Density filters, and it provides an interesting perspective and insight into the use of these filters. We worked with Galen to design the filters that still bear his name, and he did a great deal to promote their use and make ND Grads among today’s most widely used photographic tools. We direct your attention to the last few paragraphs especially…

Few photographers who own graduated neutral density filters know how to properly use them. These deceptively simple gadgets shift across their field from clear to neutral density, but often fail to deliver the desired exposure control within a color slide. It’s a lot riskier to alter density on an original color slide before the shutter is released than to experiment later by burning and dodging prints in the darkroom, as black-and-white photographers have been doing for generations.

The brief design history of ND grads reminds me of the barriers that kept computers out of the home and small office before 1980. The raw computing power for writers to move words around existed, but hardly anyone bothered until a better interface between human and invention was worked out. The original ND grads were about as user friendly as a 1960 IBM card. Accessing their potential was so fraught with hassles that most early users gave up.

My success rate has gone up at least a thousand percent since I first bought an ND grad in the seventies to more closely record the colors and tones I naturally saw. The range of usable detail on fine-grained Kodak or Fuji slide films is about a stop and a half in either direction. These three stops equate to a brightness range of about eight to one that can be increased to 64 to 1 with a three-stop ND grad. Although this opens whole new possibilities in color photography, it pales beside the eye’s range of about 2,000 to 1.

As with all good things in life, there is no free lunch. That twenty-dollar screw-in grad from a popular after-market filter company is likely to give you garish off-color, a split down the middle where you don’t want it, and vignetting of the corners with that 20mm lens you like to use to get full depth of field from shadowed flowers to sunlit mountains – a typical situation that calls for a graduated filter. ND grads are normally sold in only one or two-stop shifts, but three stops are often necessary to balance deep shadow gradation through the viewfinder, but when you put it over your lens, only the barest hint appears. This also happens because your eyes see such a great dynamic range.

The position of the gradation over the lens can give a false impression. The percentage of shading over the front element does not necessarily equate to your slide. At f22 on certain lenses an apparent one-third gradation may not show at all on the final image. Only the part of the filter in line with the image coming through the diaphragm opening counts. Original designers of screw-in grads gave them a 50-50 split so they would work to some degree with any focal length or aperture.

A further complication is that when you hold these filters up they appear to be split at the light end of the gradation, but the edge you see on your film is near the dark end. What looks like a 50-50 split in the hand could be a 40-60 or even 35-65 split on your slide. This has dire consequences where the gradation is intended to hold down a bright background above your subject. If the edge ends above where you thought you put it, you’ll have an unnaturally bright band that draws attention away from the intended subject.

Whether using the set gradation of a screw-in filter that can be turned sideways but not adjusted up and down, or the more adjustable edge of a square filter in a special holder, the position of the gradation and its effect can be best visualized through an SLR camera with a depth-of-field preview control (missing on cheaper SLRs these days). Here’s my method:

Set your aperture for your final exposure if it is f8 or higher (as is normally the case for landscapes to achieve good depth-of-field as well as lens sharpness). Hold the depth-of-field preview button down while turning the filter slightly back and forth on the lens with your other hand. With motion the gradation will become far more visible. If you still can’t see it well, aim the camera temporarily at a continuous tone area such as grass or sky. In the rare event you want to use a grad with a wide aperture below f8 (a moving wild animal or human figure, for example), first stop down the lens to where you clearly see the gradation, then gradually open the aperture and watch how the line of gradation recedes rapidly. You’ll see where it falls far more easily as it changes position. On a typical wide angle lens, a setting for a 50-50 split at f16 darkens less than 10% of the frame at f2.8.

Color fidelity is poor on the most commonly used graduated filters. Many, such as Cokin squares or screw-ins, are not labeled ND filters. Sold as graduated gray, they have a magenta or brown shift that becomes severe with high saturation films such as Fuji Velvia. Every one of the dozen brands of gray or ND grads I have tried in the price range below $50 is simply not acceptable for my work in terms of color fidelity.

My solution is to only use somewhat more expensive filters with carefully controlled spectral response. My choice are Singh-Ray grads because of their true color, fine optical quality, and availability in custom configurations. Most major companies offer only the few filters listed in their catalogs, but Bob Singh told me on my first call to his Venice, Florida shop, “Just tell me what you want and we’ll make it for you. We do that for anyone. You photographers know what your needs are better than we do.” For me, this makes the key difference over other quality grads in the same $100 range as Singh-Ray. I doubt I could have succeeded in making the tricky photo that accompanies this column with any off-the-shelf filter. (Note: the photo above is one of Galen’s ND Grad shots, just not the one that appeared with this column originally.)

I no longer carry any screw-in grads. They’re far too limiting. I pack either two or four Singh-Ray rectangular filters custom sized 84mm wide by 120mm in length to fit a Cokin “P” holder. The extra length permits unusual 90-10 or 10-90 situations, such as a field of flowers with only an edge of brightly lit mountains in the background, or a range of mountains with a vital subject in a narrow strip of shadow.

Each of my four filters serves a different purpose. When I go light and carry just two, I choose one that has a soft, gradual shift from clear to a two-stop gradation (especially useful where the boundary between light and dark is not straight, as in increased sky detail on a cloudy day beside a waterfall). My second filter abruptly changes from zero to three stops across only five percent of its area for use in sunrise or sunset situations with hard-edged shadows. This filter adjusts the light values between discreet zones without the unnatural shift across an even sky that would take place with a soft-edged filter.

On a serious photo trip I feel naked without four grads. A three-stop filter with a soft gradation is harder to use without the edge being noticeable than a two-stop, but invaluable where strong shadows fall alongside rough lines of rocks or trees. The fourth filter is a two-stop hard edge for use with sharply defined but more open shadows where the lighting contrast is less than three stops. Pound for pound and dollar for dollar, these four one-ounce filters have given me a greater return in both dollars and otherwise impossible images than any equipment I own.