Editor’s note: Robert Clark is a master of waterfall photography. He is a graphic designer, architect, landscape photographer and teacher – and works as a media designer, manager and frequent photographer for the National Park Service. This post is loaded with Bob’s great waterfall shots and tips!

Waterfall photography is a very popular among landscape photographers. Of all the landscape images I make, I find that shooting waterfalls remains my favorite in terms of subject matter. Capturing the very real sense of movement of water makes for a truly dynamic photographic experience.

Producing powerful images of waterfalls requires some basic techniques and filter use that anyone can master. In this post I will present a few of the filter techniques I use. 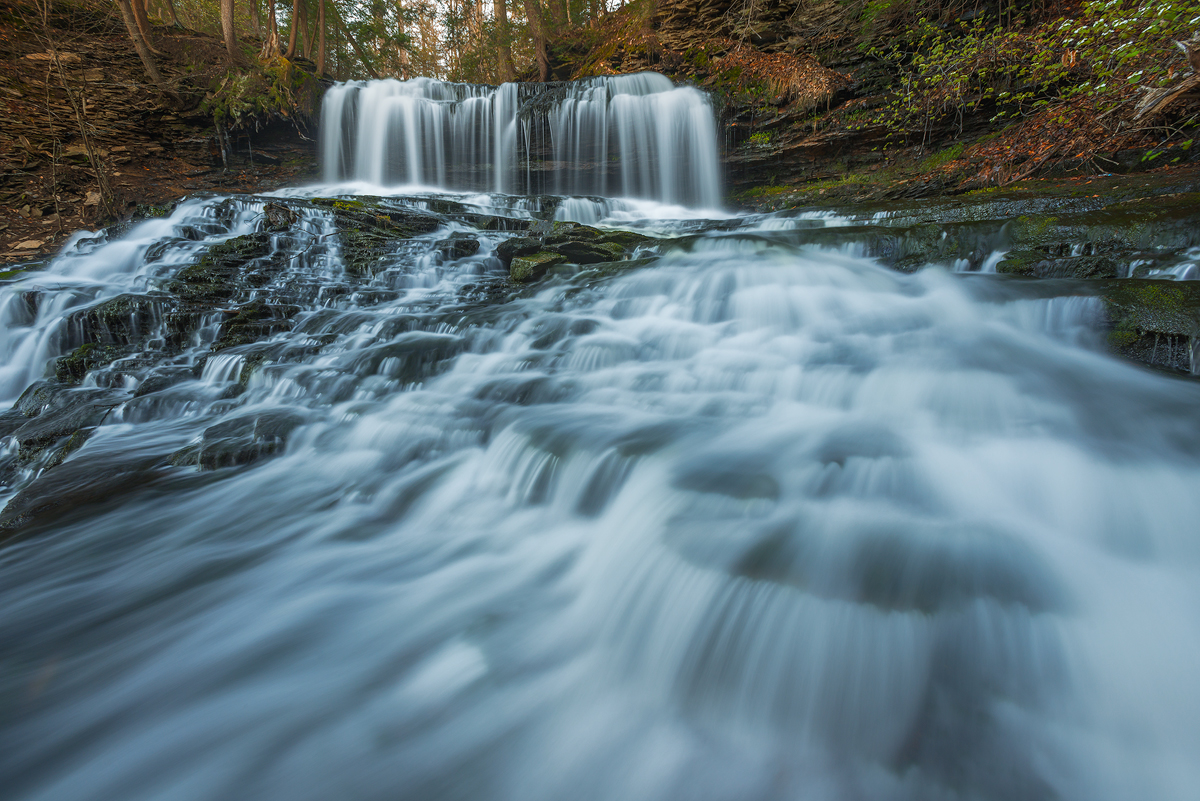 A long exposure of six seconds really helped accentuate the silky flow of water over a stair step of rocks. Even with the long exposure, a certain amount of texture is apparent where the water drops over the stones. This was shot using a Singh-Ray 105mm LB Warming Polarizer and a 3-Stop George Lepp Solid ND.

My own personal approach to photographing waterfalls is to capture the silky look of the water in contrast to the solidity of the surrounding landscape. To do so requires shooting with longer exposures, generally in the 1 to 8 second range. In some instances, I have utilized exposures longer than a minute. The amount of blur achieved in a waterfall shot is ultimately determined by the shutter speed you choose. But the shutter speed you choose is largely dependent on the flow of the water and the overall effect you are looking for.

I do not have standard shutter speeds for waterfalls because it is a variable based on several conditions, such as the weather, time of day, direction of the water and the water’s volume and speed. 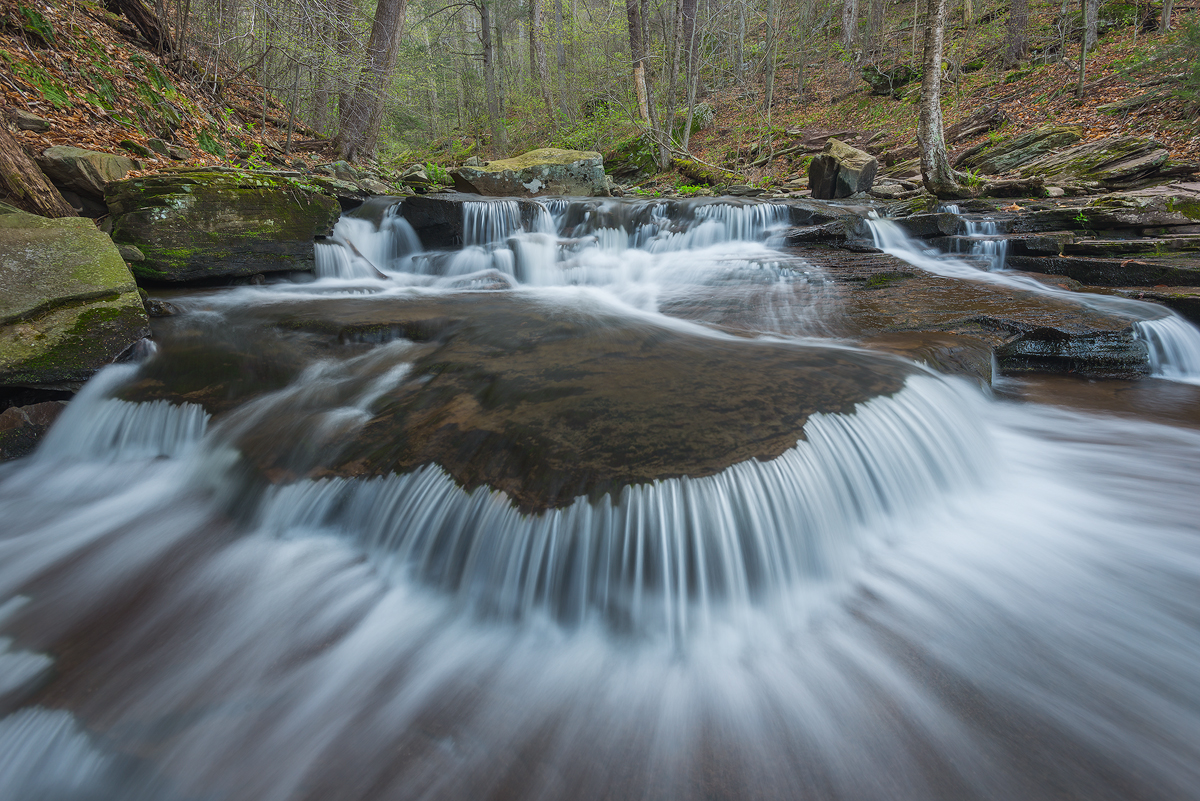 The water was moving pretty quickly over this feature and a longer exposure would have blurred the textual features. Here I used a shutter speed of two seconds, which gave me the right amount of blur while retaining the delicate lines of the water. This was shot using a Singh-Ray 105mm LB Warming Polarizer and a 3-Stop George Lepp Solid ND.

Of these conditions, the two I focus on the most are the time of day and the volume and speed of the water. Knowing that I am already going to shoot for the “silky flow” look simplifies my process a bit. The biggest concern at that point is ensuring that I retain some amount of detail in the water and do not blow out the highlights.

I shoot a lot of my waterfall images in the early morning or late afternoon and, in many instances, in twilight. So even before I have applied any filters, I’m already working with longer exposure times. I choose these shooting times as a matter of deliberate practice. I prefer lower contrast light to higher contrast light for the simple fact that it makes for a better image. High contrast light and especially bright sunlit highlights can be very difficult to deal with and in most cases cannot be recovered in post processing. A softer, more uniform ambient lighting is the best. This is one of the reasons shooting in twilight, foggy and overcast conditions will make for better waterfall shots.

This is a silky flow taken to extremes. Everything around this waterfall was frozen and the water was moving very fast. I decided on a long, 10-second exposure, to make the water appear like a frozen slushy. This was shot using a Singh-Ray 105mm LB Warming Polarizer and a 5-Stop Mor-Slo Solid ND.

I never shoot waterfalls without my polarizer, regardless of the conditions. Even in lower contrast conditions, water, water droplets and dew on plants, rocks and in the actual flow of the water can produce a specular highlight that affects the image. The polarizer will reduce these specular highlights and in addition allow hidden elements under the water to be revealed for more detail. For 90% of my shots the polarizer suffices. In situations where I still need some added exposure time I will slot in one of the 4×4 solid ND filters or use the Vari-N-Duo. 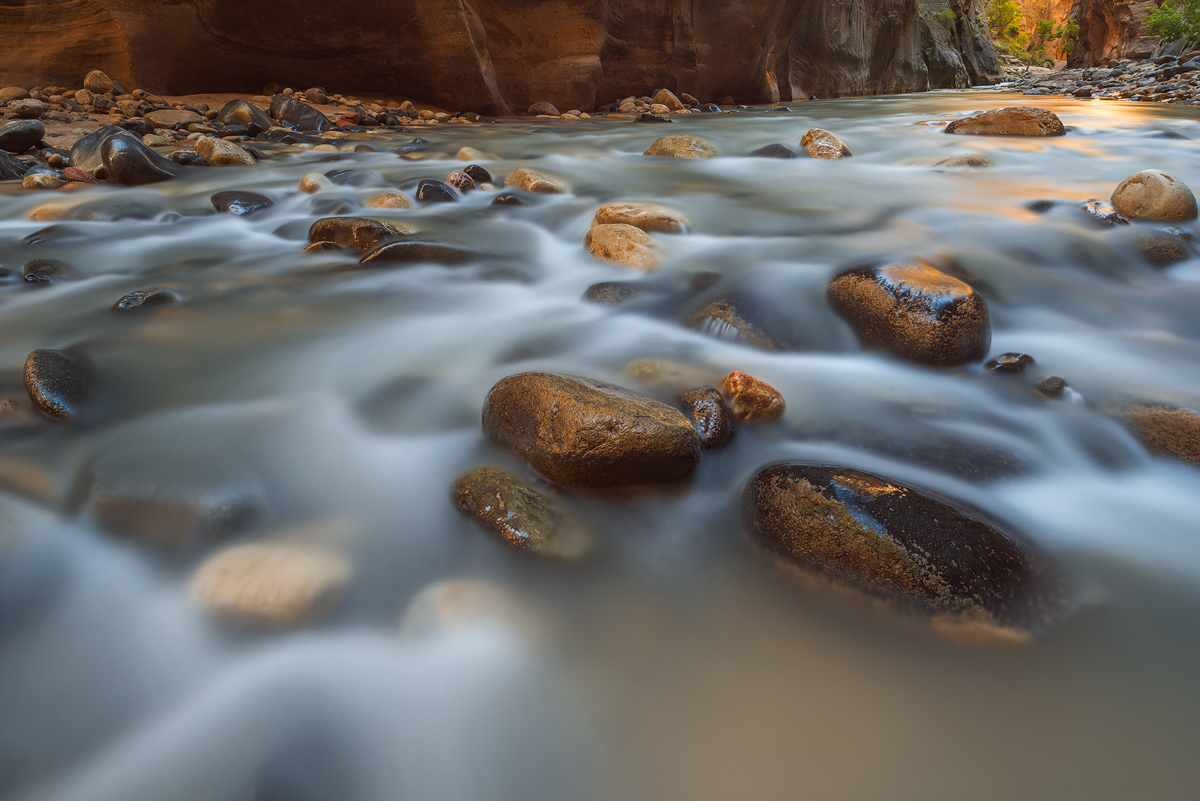 This flat water scene in The Narrows at Zion was shot with a long 30-second exposure. The beautiful reflected light from the canyon walls can be seen in the water. The smooth flow of the water works well with the rocks and canyon walls and aids in accentuating the reflections in the water. These shots work best with reflected light. This was shot usinga Singh-Ray 105mm LB Warming Polarizer and a 5-Stop Mor-Slo Solid ND.

For my general camera settings, I always shoot in manual mode with Matrix Metering. ISO is set to L0.5 (equivalent to ISO 71), exposure brackets set at ½ stop intervals, mirror lock-up is on and I use an electronic shutter release. White balance is typically set to Auto, although I might alter it depending on the light. Oh, and last but not least, I never shoot a waterfall without my tripod. Never. It may seem obvious, but it’s impossible, at the long exposure times I use, to achieve a good image without a solid base of support for the camera. 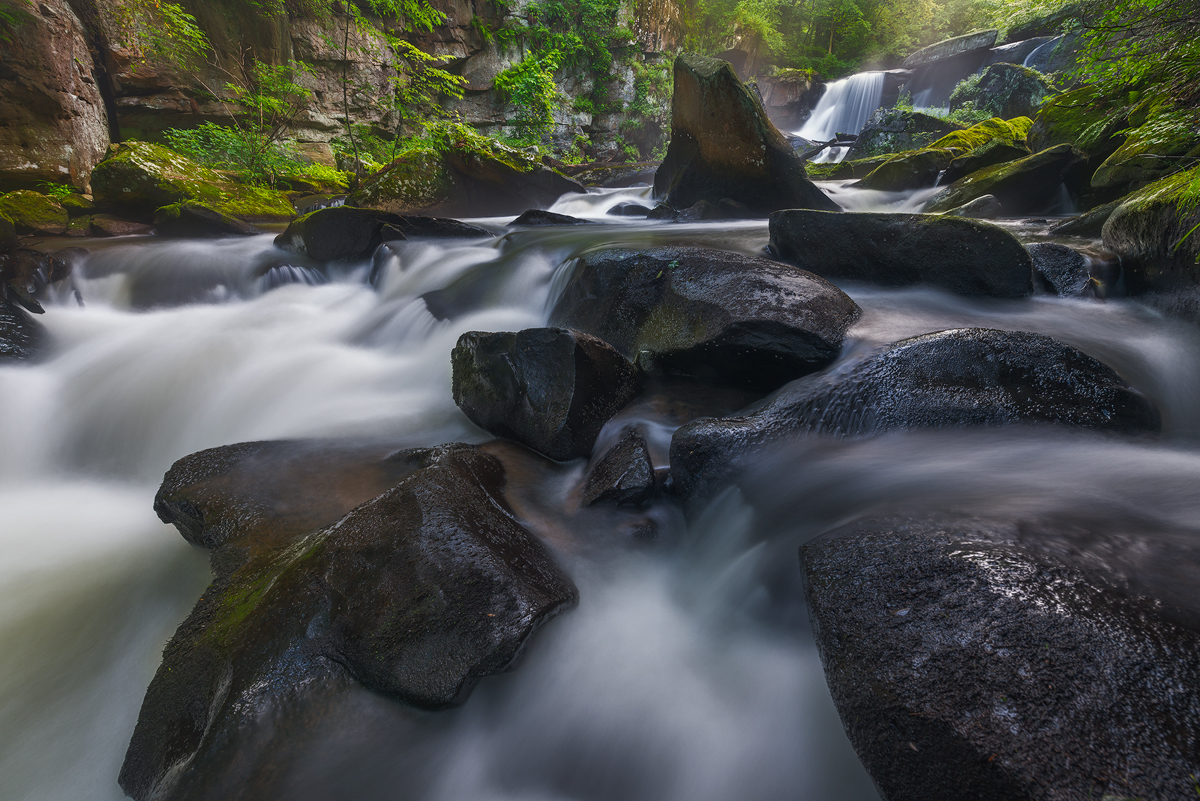 In this image I was really “in the flow” and up close. Shooting tight on foreground elements can really produce a dynamic composition. Adding the soft flowy look to the water creates a nice contrast to the solidity of the rocks. This is a 2-second exposure and was shot using a Singh-Ray 105mm LB Warming Polarizer.

I do bracket my exposures, but I do not auto bracket. What I choose to bracket depends again on conditions and the effect I am going for. Brackets for exposure are generally 1-stop apart but I will go in ½-stop increments as well, based on what I am seeing in the histogram. This is one of the reasons I like to use manual and be able to control stop increments.

When going for maximum depth of field, I will also add in focus brackets. The last potential bracket would be one with a faster shutter speed to capture lost texture in the water or to compensate for movement caused by wind or other air or water circulation that causes movement in plants. I can easily shorten my exposure time by changing to a higher ISO, such as 200 or 400. While that may seem like a lot of captures, digital storage is cheap these days, and I would rather have all the information I need to prepare the final master file. 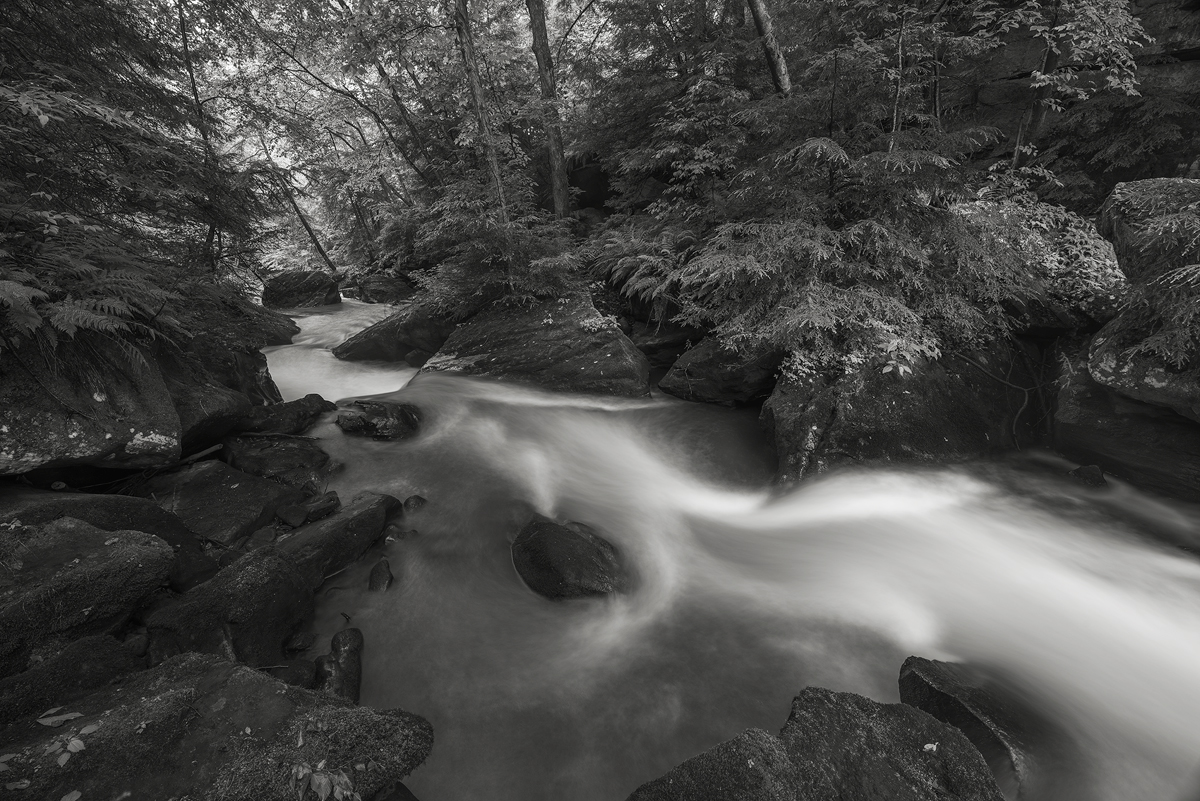 When shooting rivers and creeks it often pays off to look downstream and find the line of the water. The line can create a dynamic sense of movement and help lead the viewers eye into your image. This is a 4-second exposure and was shot using a Singh-Ray 105mm LB Warming Polarizer and a 3-Stop George Lepp Solid Neutral Density filter.

The basic information I have discussed may seem like a lot to take in. With practice this kind of thing becomes second nature. I also suggest that you spend time scouting your shots. You need to spend time watching the flow of the water and understanding the light. Use your camera’s live view and histogram to fine-tune your compositions and understand the exposures. If you do not have any filters now, I strongly suggest you start with a Singh-Ray circular warming polarizer. As you get more proficient you can add some neutral density filters to your kit or use a Singh-Ray Vari-N-Duo.

Lastly, shooting in and around waterfalls can be extremely hazardous. Fast moving water conditions, the potential for debris, not being able to see the bottom, and slippery surfaces can lead to disaster for yourself and equipment. I personally “get into the flow” of my locations, but I do so after assessing the risks including checking the flow rate of the water, scouting my shot locations, checking water depth and footing, looking for unforeseen hazards and wearing the proper gear for wet wading. 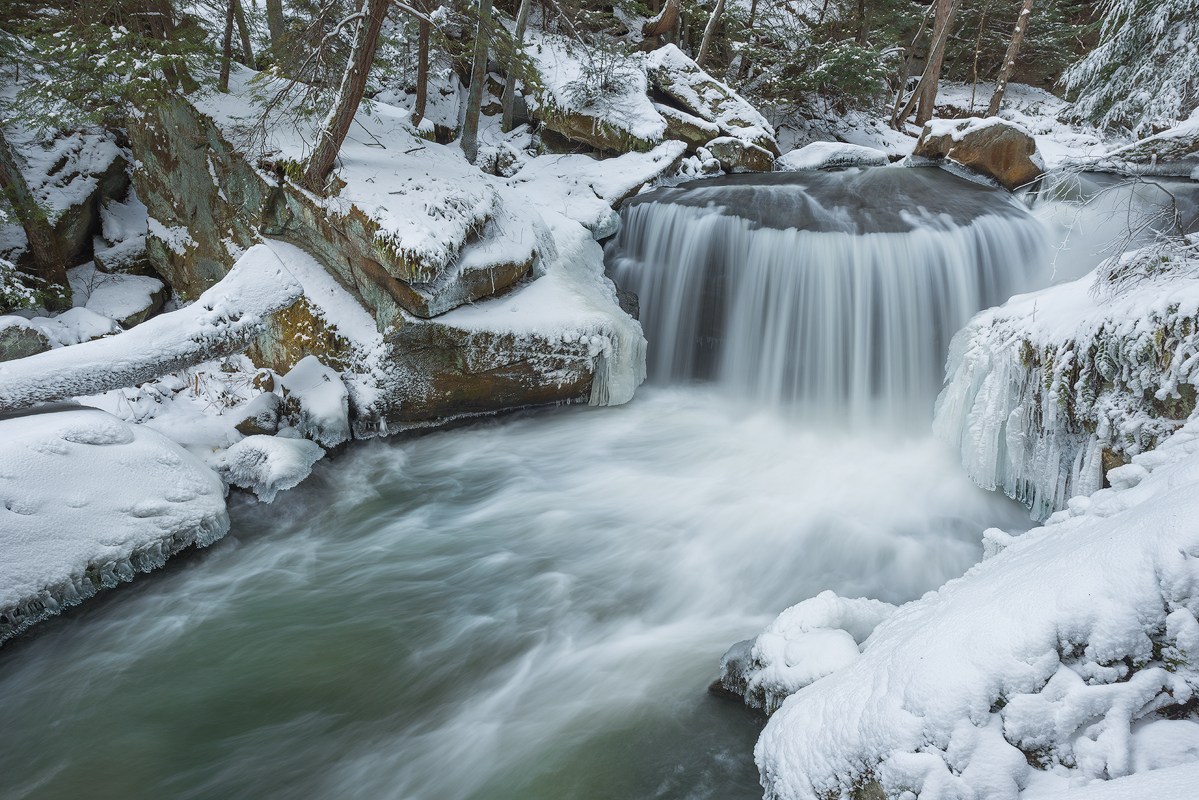 This is another situation with a lot of fast moving water. I needed the right shutter speed to accentuate the feeling of the flow, but not so much where I lost the sense of texture. After some trial and error I determined that anywhere from ½ to 1 second was the right amount. This is a 1-second exposure and was shot using a Singh-Ray 105mm LB Warming Polarizer.

Strong water flow and slippery conditions can sweep you off your feet quickly. I strongly encourage you to scout your shots and locations. You must know your own limits and be safe. Whenever possible you should shoot with another person and never get into a situation where you can’t extract yourself. No shot is worth sacrificing equipment, a severe injury or even worse! 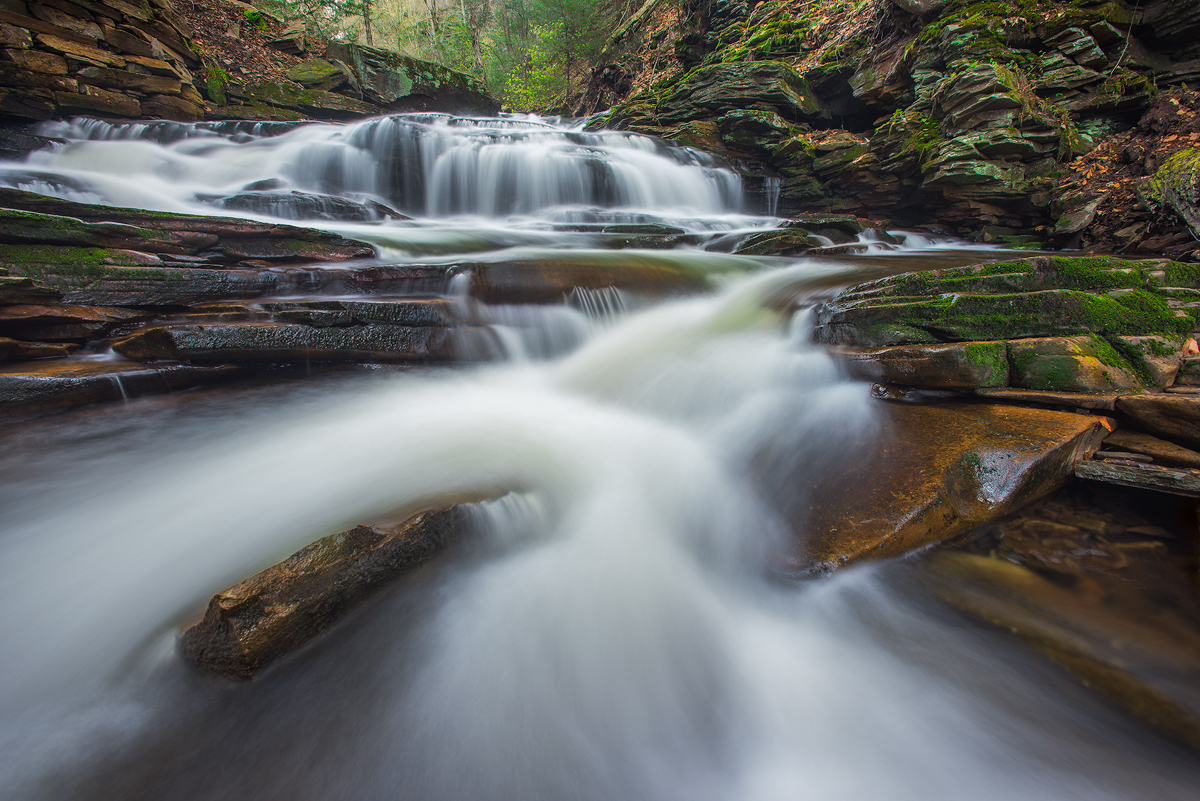 I often look for dynamic angles in my compositions. Here the placement of the rocks all work together with the flowing water. This effect of creating soft and hard components in your images adds for visual interest and allows the viewer a way to wander through your image. This was shot using a Singh-Ray 105mm LB Warming Polarizer and a 3-Stop George Lepp Solid ND.

So now that you are armed with some basic techniques, let’s get out and get into the flow!

His pro gallery on this site