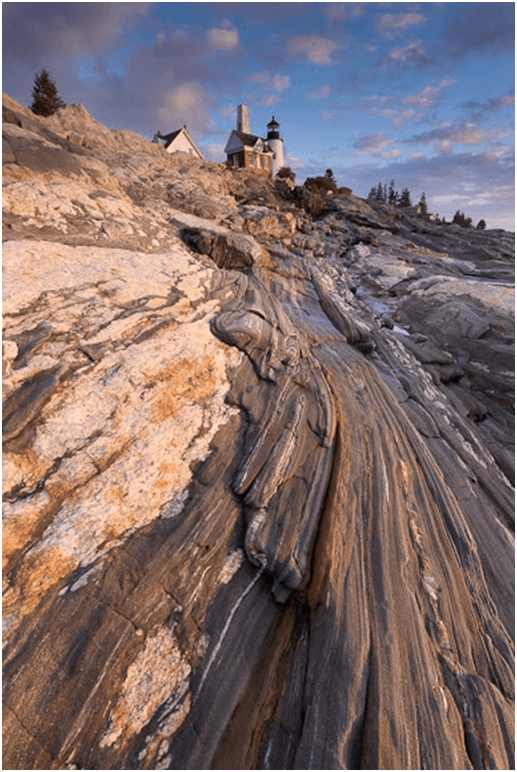 Living on the rugged coast of Maine provides a nearly endless coastline dotted with thousands of islands, inlets, and waterways to be explored and photographed in every season of the year. How could any serious outdoor photographer wish for more?

But there is plenty more to appreciate about the Maine Coast… like the four distinct seasons we have. Each brings its own weather, its own colors, and its own nature. Winters can be harsh — freezing cold and wet. Spring and summer bring the fog and wildflowers. And fall brings a new world of changing colors that attracts countless visitors from everywhere else in the world.

Many people who visit Maine make the detour to visit Pemaquid Point Light Station in Bristol — and for good reason. It offers a widely held image of Maine: the pounding surf, the sound of the fog horn, the omnipresent seagulls, and the smell of salt water. All of these elements come together at Pemaquid to create an iconic image of Maine. I had visited Pemaquid a few times before I created the image above. While exploring the area beforehand, I came away really impressed by the graphic quality of the exposed bedrock that surrounds the lighthouse. I decided to use that as my foreground. Even though the lighthouse is one of the most photographed scenes on Maine’s coast, I had never seen this composition before. I’m not a big fan of repeating what others have already done. Nevertheless, with my personal composition in mind, I now was hoping for the right lighting conditions to make it happen.

Leaving my home at 3:30 am, I arrived at Pemaquid Point before sunrise. At the time, I was shooting with a Nikon D80 and a Sigma 10-20 mm lens. To emphasize the textures and lines of the rock, I focused really close — just inches away from the rock. I set the focal length of my zoom lens to 10mm and stopped down to f/22. As the sun rose over the ocean and the first rays of light warmed the scene, I was anxious to press the shutter. First, however, I needed to decide on the right Graduated ND filter to balance the exposure level of the sky with that of the rocky foreground. After I had spot-metered both the foreground and the sky, I calculated a three f/stop difference in the light levels. I picked out my Singh-Ray 3-stop hard-step Graduated ND filter and placed it over my lens, lining up the gradient line where the foreground and sky met. The filter effectively reduced the intensity of the brighter areas of the sky, so that my exposure was very well balanced. This image would not have been possible without using the ND Grad. While I could have bracketed several exposures and then combined them later in Photoshop to achieve a similar result, I chose to avoid creating more work for myself at the computer. 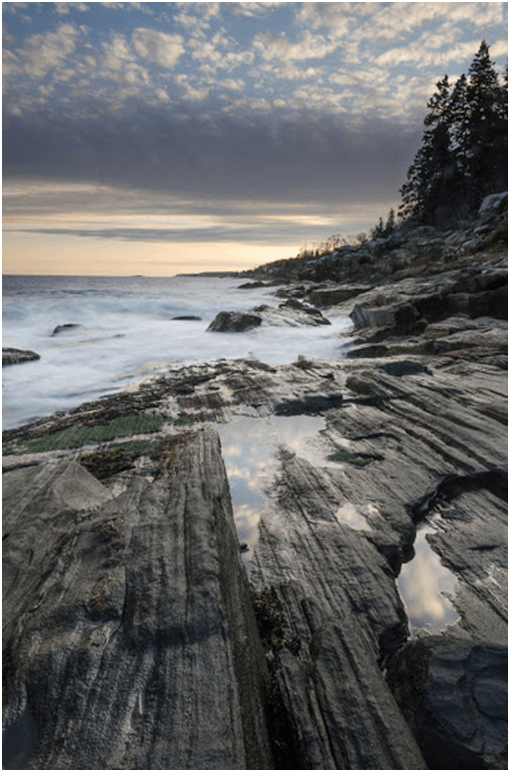 Just a short drive from Pemaquid on Rt. 32 south of the village of Round Pond, we arrive at La Verna Nature Preserve — home to an impressive section of Maine coastline. With a more wild feeling than many of Maine’s coastal attractions, La Verna’s shoreline is characterized by unusual and varied bedrock; the various layers of stone are literally folding over each other, creating a Jurassic-like experience. Untouched by development, the boom of the Atlantic surf can be heard on the approach when a good swell is running. The evening I took this photograph I was fortunate to have good weather conditions — interesting clouds, pools of water, and calm winds allowed for a still reflection. I particularly liked how the trees complemented the scene and quickly set up my tripod. I knew the lighting on this image would be a challenge — the brightest part of the image, the horizon, was next to the darkest part of the image, the trees. I wanted to balance the light somehow, without overexposing the highlights and losing too much detail in the darker areas of the image. This would be a great place to use a Reverse ND grad, but I only had the 2 and 3-stop ND Grads with me. I mounted my Singh-Ray Vari-N-Duo on my Nikkor 17-55 f/2.8 lens, adjusting the polarization so I reduced the glare coming from the rocky foreground. I did not intensify the neutral density in this instance, simply adjusting the ND dial to ‘minimum.’ After stacking my 2 and 3-stop ND Grads together and handholding them in front of my lens, I took some exposures, noting the results in the histogram. I ultimately placed one of the filters diagonally on top of the other to achieve the final exposure as seen above. The image was then processed in Lightroom 4 where I was able to bring out more detail in the shadow areas. Without the help of the Singh-Ray filters, capturing this scene would not have been possible. 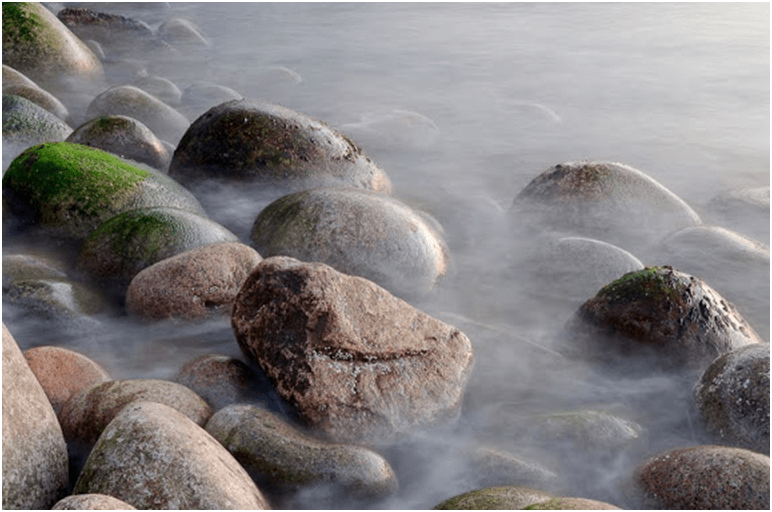 At least once a year I make the trek to Acadia National Park. This well-known venue for photographers is unique to the east coast for its combination of both a rugged coastline and mountains — all in a compact and easily accessible area. One of the things I like about it most is the variety of boulders and stones you find there. Combined with the movement of the ocean surf, this can lead to some interesting and unique images.

To create this particular image I was in position early as the sun was rising directly to the east. I had scouted this beach the day before, and had a vision in mind for the composition I wanted. I set up my tripod with the Nikon D7000 in the boulder field, and framed a series of stones using my Nikkor 17-55 f/2.8 lens. With my camera set to matrix metering, I mounted my Singh-Ray Vari-N-Duo filter and began to experiment with varying levels of neutral density and polarization. I was looking for a milky, ethereal effect, created by water moving around the boulders. To achieve this I needed to lengthen my exposure time (8 seconds in this case). Equally important, I wanted to reduce the glare on the boulders so the colors and textures were fully visible. In this instance, the Vari-N-Duo helped me overcome two challenges — neutral density and polarization — in one filter. If I had to choose one filter to always have with me, this would be it! 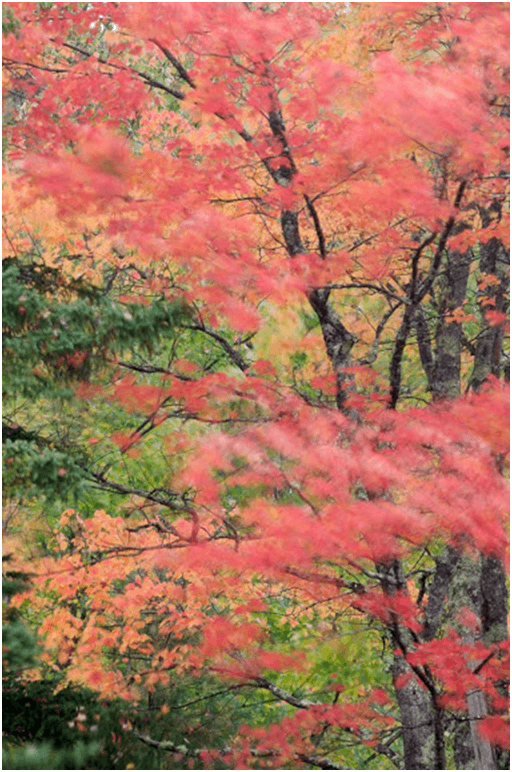 On the same trip to Acadia I set out one morning to photograph the vibrant fall foliage. The lighting conditions that morning were ideal for shooting in the forest with an overcast, cloudy sky. In this type of situation, the cloud cover creates uniform lighting that eliminates extreme contrasts and shadows.

After visiting a few locations in Acadia that morning, I found a pond surrounded by trees that were popping with color. I walked around the pond, trying out different compositions with my Nikkor 70-200 f/2.8 lens. I was using a telephoto lens because I was shooting from a distance, and wanted to compress the elements of the scene from front to back. Once I found a composition that worked for me I knew I needed to add a polarizer to remove the glare from the leaves. I screwed on my trusty Singh-Ray Vari-N-Duo and adjusted the polarization to my liking. My initial intent had been to capture a sharp rendition of the scene. As much as I tried, however, I could not get the leaves in focus; a breeze had kicked up, making this next to impossible given the low light. It was time to change gears and use my secret weapon. I tuned in more neutral density on the Vari-N-Duo and created a blurry, impressionistic rendition of the scene. After experimenting with different apertures and levels of neutral density, I eventually settled on f/16 and tuned in as much density as the filter allowed — the exposure above ended up being 13 seconds! This illustrates the versatility of the Vari-N-Duo and why I consider it my most essential filter.