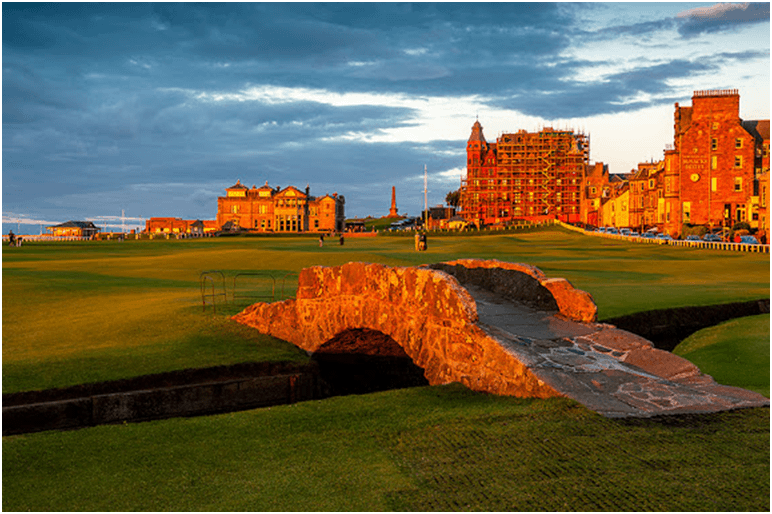 While I was anticipating beautiful scenery, I did not expect it to be so overwhelming. There was some rain, but what would the Scottish Highlands be without the rain, fog, and dramatic clouds?

After a few days in Edinburgh to get over the jet lag, we rented a car and sped off to the town of St. Andrews. For those of you who are not avid golfers, St. Andrews is the birthplace of the sport and home to the greatest golf links in the world, The Old Course at St. Andrews. In the image above you are looking across 700-year-old Swilcan Bridge onto the 18th green and the Royal and Ancient Golf Club. To get this photograph I had to dodge a few incoming golf balls while attaching my Singh-Ray Warming Polarizer to enhance the warm light of the setting sun. I also hand held my Singh-Ray 3-stop, soft-step ND Grad to hold back the sky. By “dodging” the ND Grad up and down repeatedly while the shutter is open, I was able to futher conceal the filter’s transition line in the exposed image. 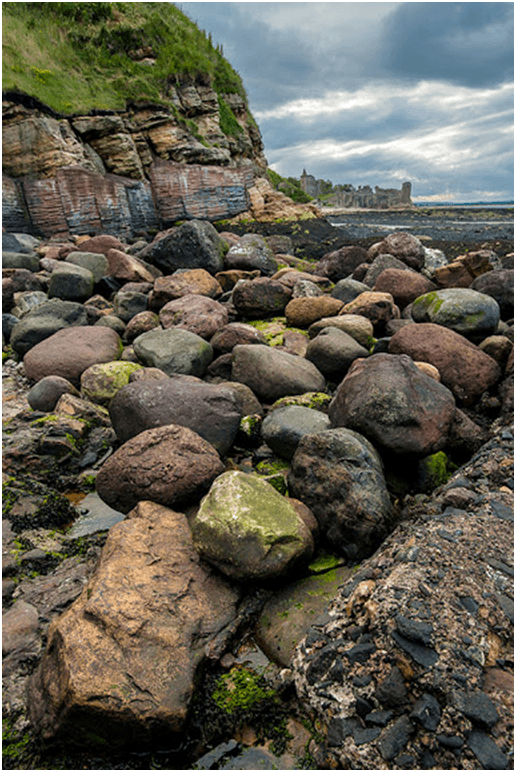 While St. Andrews is known the world over for its golfing heritage, it also has a very picturesque seacoast. The city’s other claim to fame is the fact that the beach east of town is where the memorable opening scene of the Academy Award winning film ‘Chariots of Fire’ was shot. While we didn’t see the 2012 British Olympic team running on the beach (they were busy competing in London) we did come across this view of the coast with the ruins of an ancient cathedral far in the distance. Here I once again used my LB Warming Polarizer to reduce the glare and get a pleasing warm tone on the rocky shore. 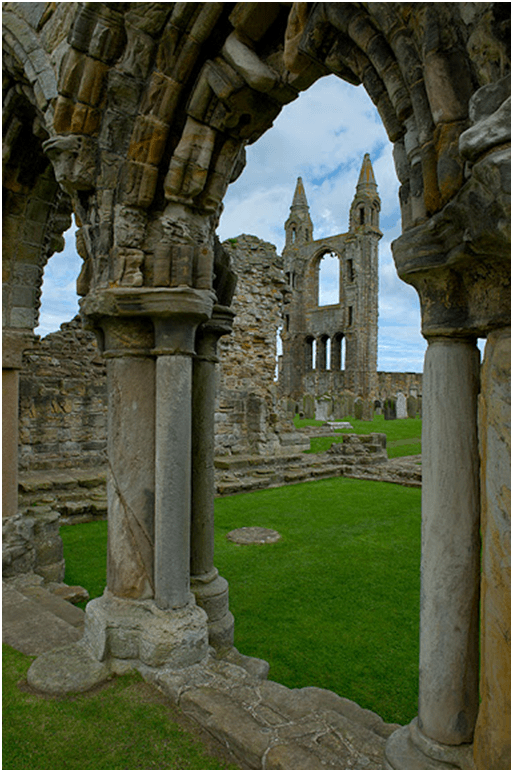 These are the impressive ruins of the St. Andrews Cathedral in the heart of the city. Built in the 12th century this medieval structure was once the largest church in Scotland. To capture this image I used my Singh-Ray ColorCombo and took two exposures. I first set the polarizer to accentuate the bright green grass and the ruddy brown masonry while setting my exposure meter to give me a good representation of the framed area (church spires and sky). I then selected a longer shutter speed to add 1 1/2 stops of exposure to bring the arches out of the deeper shadows and record the details. Back home, I blended the two images in Photoshop by using a layer mask and a soft brush at varying levels of opacity to get a good blend between the background and foreground elements.

After a splendid four days in St. Andrews, we moved on to the city of Inverness on the banks of the mysterious Loch Ness. We were met with what the locals told us was more typical Scottish weather, cold, dank, and wet. Nonetheless, I was not to be deterred. Besides, while I might spend the day out in nasty weather I knew a warm and friendly pub would be nearby when I got back to the hotel. 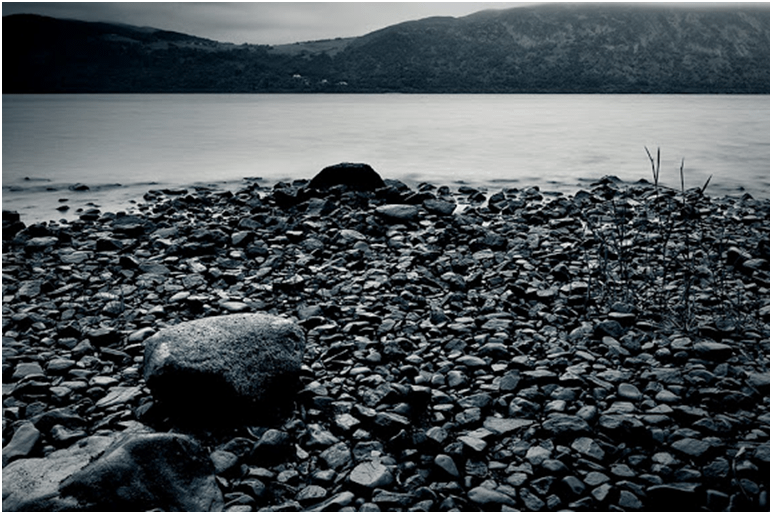 As we drove the A96 Road skirting the banks of the Loch we came across an opening in the thick forest to find this beach strewn with stones and pebbles. It was windy and raining while I focused intently trying to compose an image in my mind’s eye. Desperately protecting my camera and lens from the elements I thought it through for a while. There was no color, the sky was a gray blanket, and visibility was low. Then I noticed that the water’s surface was a little choppy. That is when I decided to employ my Singh-Ray Vari-N-Duo and set an exposure level that would benefit a black and white image by giving the water a misty effect. Now, I thought, that would add to the mystery of this lake. I set my tripod low to the ground and selected my 16-35 mm zoom; setting it to about 24 mm. I then added some polarization with the Vari-N-Duo to take the sheen off the stones before cranking the neutral density to just short of maximum. Back home I processed the image as a black-and-white selenium-toned image. 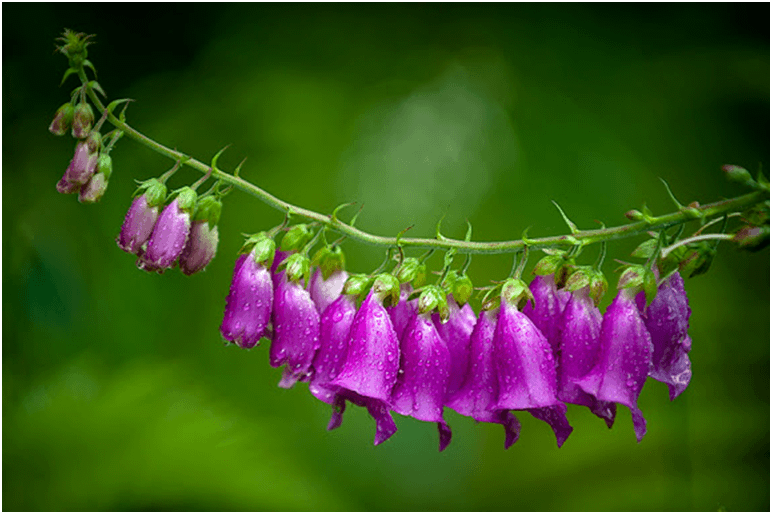 Once I was done shooting from the banks of Loch Ness, I hiked through the surrounding forest. Everywhere I looked were these beautiful blossoms shooting straight up into the sky like rockets. I later found out they are called Foxglove, a biennial shrub common to western Europe, Asia, and northwest Africa. They were difficult to photograph since they grow in an upward direction. In order to isolate the blooms you had to shoot skyward giving an unpleasant, blown-out background of a gray sky. Then I came across this specimen that was growing horizontally. The super saturated greenery in the background was the perfect foil for the bright purple flowers. I pulled out my LB ColorCombo Polarizer again to boost the colors and remove the sheen on the surface of the petals and the delicate water droplets. The elegant upward curve of the stem made it easy to arrange a pleasing composition.

Finally, I must mention all the lovely images we found in the city of Edinburgh. This was taken near our hotel in the churchyard of St. John’s Church which is home to an 18th century cemetery. I put together a digital panorama using my Warming Polarizer to saturate the deep greens and control the reflections from the wet surroundings. A word of caution when shooting panorama images with a polarizer: I avoid using one when the panorama includes the sky since I will have a very difficult time blending the overlapped edges of sky due to the panning effect changing the orientation of the filter to the sun. This results in changing tones at the edges from frame to frame. In this case I was very careful to use the filter judiciously and use just enough polarization to remove reflections but taking care not to set the filter to maximum effect.

Scotland is a wonderful place for photography. It is steeped in ancient history, the countryside is rugged and majestic, and the people are very friendly. While I will now check off this country from my short list, I’m afraid ten days was not nearly enough time to get it all in. Maybe a second trip is in order, especially since I finally got the hang of driving on the ‘wrong’ side of the road.