I can not adequately describe how mind-blowing my visit was with these adorable king penguins. After spending a week sailing in horrendous seas with terrible weather, I finally arrived at my dream photography destination. Upon landing, most of the king penguins were somewhat skittish, but these guys walked right up to greet me! Oh, boy. It was cold, too. The fresh snow on the normally rocky beach, however, helped make this already dramatic scene even more photogenic.

In order to photograph this spectacle, I got down on my knees and used a wide-angle lens as these curious penguins inspected me. I created this image above using my Canon 5DmkIII, Canon 17-40mm f4 lens, with a Singh-Ray LB Warming Polarizer and 2-stop hard-step Graduated Neutral Density filter. 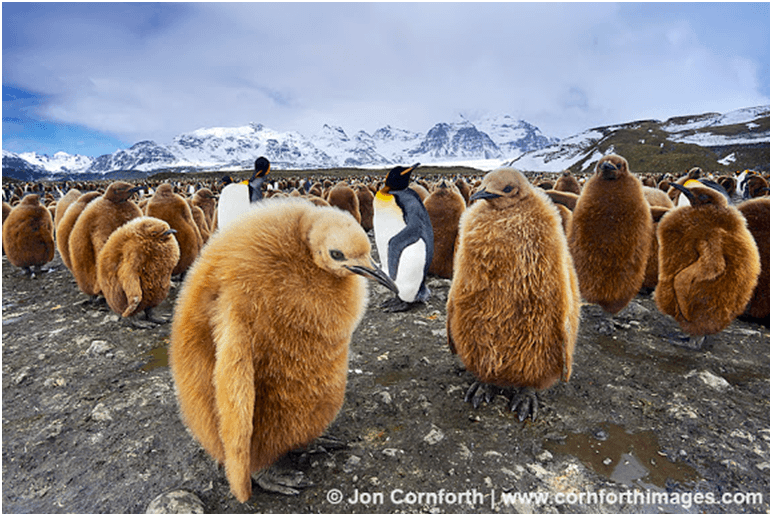 This next photo shows the king penguin chicks, which are also called ‘Oakum boys.’ My senses were completely over-loaded by the smells, sounds, and size of the king penguin colony containing more than a hundred thousand penguins. The grandeur of the landscape makes this one of the most spectacular settings on Earth.

These juveniles were very curious about me, mostly because they were getting hungry and must have thought I looked enough like mom or dad that maybe I would offer them a free meal. I was focused on getting ‘the shot,’ but it was hard while doubled-over laughing at the hilarious antics of the penguins hopping around, flapping their wings, and running into each other. This image and the one below were captured using my LB Warming polarizer and 2-stop hard-step ND Grad. 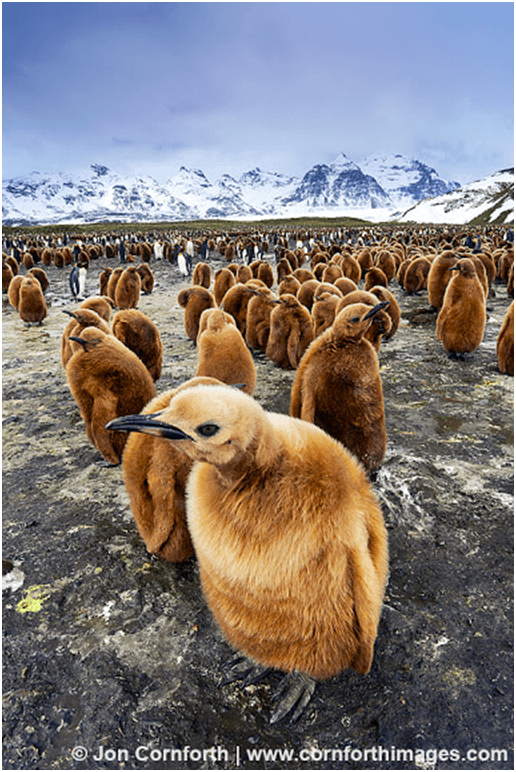 I was very fortunate to spend as much time as I did photographing these residents of Salisbury Plains. Keep in mind that in order to visit South Georgia Island, I chose to sail on a small sailboat and suffered for almost a week each way. It was much more difficult than what your average cruise ship visitor experiences. However, I did not join the trip for the misery of the sailing. I paid to be able to spend more time photographing wildlife up close and personal. I hope that everyone who admires my photography can appreciate the special risks and challenges that serious nature photographers must undertake in order to create images that are truly unique. I also hope they appreciate the drama and humor that I strive to integrate into my work. 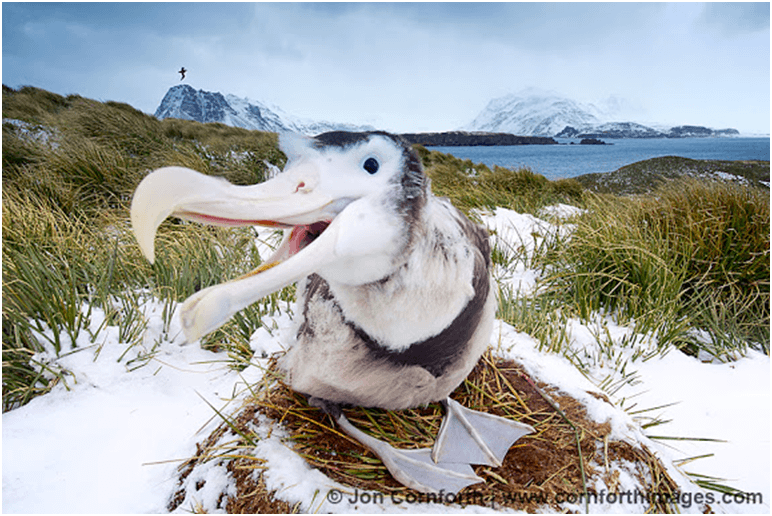 Here’s another cute baby animal! One of the first locations I visited during my South Georgia Island ordeal expedition was Prion Island, which is home to a declining population of wandering albatross. The reason the population is in trouble is due to long-line commercial fishing. The albatross are attracted to the baited hooks that the long-liners use. Once they bite a hook, they get pulled underwater and drown. It is very sad. There were not many albatross around during my visit, so I was fortunate to be able to spend the better part of an afternoon with this beautiful, photogenic creature. I created this image with my LB Warming polarizer and 4-stop soft-step ND Grad filter.

After surviving this grueling expedition, I can now reflect back upon it with some fondness, but it is not easy. I am working on forgetting the physical discomfort and personality disputes that I endured, and trying to appreciate the amazing images that I was able to create. Was the effort and expense worth the 6 days of photography that I accomplished while being away from home for a total of 32 days? Would I do it again? Would you? Ask me in a few more years. Until then, I hope that people viewing my images will be inspired to someday visit South Georgia Island on their own. Just don’t go on a sailboat!

Jon frequently publishes images and articles with Outdoor Photographer and Popular Photography magazines, as well as offering fine art prints and images for other editorial. You’ll find him active on social media where he regularly shares his most recent adventures as well as provides photography tips. Jon has photography tours in the works, so consider joining one of his future expeditions!